Book "Shelfies" as Autobiography and Aspiration

I recently participated in the social-media craze of naming 10 books that have stuck with me, then asking friends to do the same. There's a related phenomenon of the book "shelfie," in which people post photos of themselves with their favorite books, or just photos of their bookshelves as self-portraits. The technology to enable this literary self-disclosure is new, but the impulse is older and has been particularly strong among liberal Protestants. 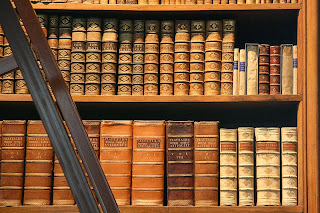 Harry Emerson Fosdick, for example, named scads of books that influenced him in his 1956 autobiography, The Living of These Days. One list that appeared early in the book served as a portrait of the preacher as a young man:

"Books were one of the most memorable aspects of my boyhood--all sorts of books from Oliver Optic to Scott, Dickens, Bulwer Lytton, Charles Reade; from Jane Porter's Scottish Chiefs and Thaddeus of Warsaw, to Anna Sewell's Black Beauty, Edward Eggleston's The Hoosier Schoolmaster, and Ingraham's The Prince of the House of David; from Lew Wallace's Ben Hur and R.D. Blackmore's Lorna Doone, to Artemus Ward and Mark Twain."

A book discussion that appeared even earlier, though, served a different purpose. Fosdick began to describe his decision, at age 7, to be baptized into his parents' church. But before he got to the event, he detoured through a discussion of Auguste Comte, Charles Darwin, Herbert Spencer, George John Romanes, Felix Adler, Robert Ingersoll, and Bordon P. Bowne. Fosdick didn't read their work as a 7-year-old, of course, which makes their inclusion in his narrative puzzling. Did he want to assert his sophistication? Did he consider the writings of prominent skeptics more formative to his adult faith than his own baptism? (For more stops on this train of thought, come to the "Texts and the Origins of Liberal Religion" panel at ASCH on Friday, January 3!)

Fosdick wasn't the only early 20th century liberal Protestant to give his favorite books a prominent place in his autobiography. To follow my hunch that this pattern reveals something about the tradition, I checked three other sources: Elmer Gantry, After Cloven Tongues of Fire, and Billy Graham's autobiography, Just As I Am.

The 1927 novel Elmer Gantry, which I've mentioned on the blog before, is a caricature of American religion, but a closely observed one. Lists of books are one way Sinclair Lewis traced the trajectories of the social-climbing bumpkin Elmer and his doubting seminary classmate Frank. Elmer was not much of a reader. He latched onto a paraphrase, or possibly parody, of Ingersoll ("Love is the morning and the evening star") and trotted it out any time he wanted to sound lofty. Eventually he accumulated a professional library--Expositor's Bible, sermons of Spurgeon, etc.--and picked up some poetry before he "collided with Josiah Royce." Elmer wanted only enough book-learning to pass himself off as a successful minister.

Frank, by contrast, was a thinker who was practically seduced by the closet atheist on the seminary faculty, Dr. Zechlin. Zechlin encouraged Frank to embrace his doubts, and "[t]hat began it--began a talk, always cautious, increasingly frank, which lasted till midnight. Dr. Zechlin lent him (with the adjuration not to let anyone else see them) Renan's 'Jesus' and Coe's 'The Religion of a Mature Mind.'" More books followed as Frank progressed through liberalism to agnosticism. Minus the intimate overtones, this same tale of a seminary professor drawing a young man into liberalism through directed reading appeared in the autobiographies of Fosdick, Shailer Mathews, and Charles Clayton Morrison.

I looked at David Hollinger's autobiographical essay "Church People and Others" to see if self-disclosure via book discussion continued into the more recent liberal Protestant tradition. The short answer is yes, as Hollinger described the books that shaped him as a historian and the ways that historical training meshed with his Brethren past. Reading Perry Miller at Berkeley was a "career-transforming experience."

Graham portrayed the role of reading in his early life quite differently. His mother encouraged him to read, and his favorite books were adventures like the Tom Swift and Tarzan series. Mother also urged on him the Westminster Shorter Catechism, the Bible, and The Book of Knowledge, an encyclopedia. For herself, his mother read "the writings of noted Bible teachers Arno C. Gaebelein, Harry A. Ironside of the Moody Memorial Church in Chicago, and Donald Grey Barnhouse, a renowned preacher who pastored Tenth Presbyterian Church in Philadelphia."

It's no great surprise that Graham would list different influential books than someone like Fosdick, but he also described them differently. The liberals I've looked into focused their narratives on the eye-opening books they read in college or seminary. Graham situated his reading in the contexts of family and church. Reading helped the liberals break bonds (except those with their academic mentors), while reading helped Graham forge them. This is a way of contrasting liberal and evangelical Protestantism that I hadn't thought of before.

I'm collecting literary shelfies now. If you've run across an interesting one, let me know!

Mark T. Edwards said…
Great post and project, Elesha!
Doesn't Graham, in Just As I Am, also claim he read everything Reinhold Niebuhr had written? And Carl Henry, in his Confessions, talks about all the liberals he had interviewed or (in the case of Walter Horton) taken a walk with? It seems part of the biographical "work" being done here is to connect themselves to those religious figures with presumed respectability. When thinking about the early new evangelicals, I can't get past Edward Carnell's admission (cited by Henry in Confessions) that his group needed to command the attention of Tillich and (John) Bennett--as he said, "we need prestige badly."
December 19, 2013 at 5:09 AM

Matt Hedstrom said…
Of course I love this topic! Thomas Merton in 7 Storey Mountain writes extensively about his favorite books at various points in his life. And there are many, many other examples, both in autobiographies and in other kinds of works.

There is also the genre of the book sermon -- sermons about "key books of the year" or "books that changed my life." For my research I became interested in the ways publishers tried to get books into the hands of preachers and encouraged them to deliver these types of book sermons, recognizing that the best kind of advertising for religious books was advertising that didn't look like advertising.
December 19, 2013 at 12:26 PM