The Cursillo Movement in America

An Interview with Kristy Nabhan-Warren 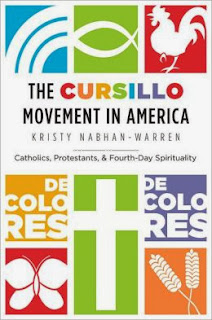 Eduardo Bonnín Aguiló, a Catholic man born and raised in Mallorca Spain, organized the first Cursillo weekend retreat in 1944. Bonnín initially intended the Cursillo de Cristiandad, or “short course in Christianity,” to serve as a space for Catholic lay men to cultivate a deeper piety and form an intimate relationship with Jesus Christ. Men who “made the weekend,” as it came to be called, were transformed into Catholic soldiers for Christ. They went forth from their weekend as cursillistas, committed to “become apostles in their communities and reform Spanish Catholicism through a lay Catholic revitalization of faith and friendship” (41). Spanish soldiers spread Cursillos across the world in a little over a decade and by the 1970s these retreats had grown into an interdenominational Christian spirituality movement in the United States. In The Cursillo Movement in America: Catholics, Protestants, and Fourth-Day Spirituality, Kristy Nabhan-Warren draws on extensive ethnographic fieldwork and archival research to illustrate the history and experience of this movement among American Catholics and Protestants alike.


Two Spanish pilots who were close friends with Bonnín, Bernardo Vadell and Augustín Palomino, introduced Cursillos to the U.S. Catholic community in 1957. Beginning with Mexican-descent male cursillistas and eventually gaining popularity among Spanish- and English-speaking lay men and women, this movement quickly became foundational for Catholic spirituality across the United States. By the 1970s Protestants had begun attending Catholic Cursillos as well, soon forming their own variations of the retreat. The history of Cursillos, then, is “a history of how a lay Christian movement spread by word of mouth…how an idea of revitalized Christianity caught on and, to use contemporary language, ‘went viral’ before this was possible, linguistically or technologically” (83). These lay-led weekend retreats emphasized personal spiritual experience over denominational difference and encouraged participants to enter into relationships with Jesus and with other cursillistas as a renewed people of faith. The Cursillo Movement in America thus challenges scholars of American religions to think across national and denominational boundaries. It suggests, among other things, that Spanish and Latino Catholicism served as an origin for many twentieth and twenty-first century American spiritual practices.

I recently spoke with Kristy about her book as well as some of the theoretical and historiographical implications of her work. Kristy Nabhan-Warren is the V.O. and Elizabeth Kahl Figge Fellow in Catholic Studies in the Department of Religious Studies at the University of Iowa and author of The Virgin of El Barrio: Marian Apparitions, Catholic Evangelizing, and Mexican American Activism (2005). (I have edited our interview for clarity.)

Matthew: Tell us why you think American religious historians need to know about this Catholic retreat from Mallorca Spain, regardless of whether they study English- or Spanish-speaking Catholics or Protestants.

Kristy Nabhan-Warren: I am forceful about this argument because I myself was clueless about Cursillos. This is why ethnography is so important to history. Oftentimes historians (and ethnographers) are not aware of what is going on among lay people, whether they are Protestant or Catholic. I first encountered the Cursillo movement when I was working with Latinos in south Phoenix on my first project [The Virgin of El Barrio]. They were the ones who first told me about Cursillo. Few scholars had written on the subject and for those who mentioned it at all, it was only a paragraph and they usually didn't mention Mallorca. So it became clear that it was really important to listen to what lay people are saying.

Kristy: The point you just made about relationships is a really important one…I see my work as growing organically. Each project has led to the next and that is largely because of the relationships I have formed. I had no idea I would write a book about [Estela Ruiz’s visions of the Virgin and the community that grew around her]. It was inspired by conversations I had with cholos as I researched a paper as a graduate student. So I have tried to be a keen listener and I tried to keep my ear to the ground. I ask myself “What is important to the people I am working with?”

Matthew: One of the things I find most compelling about this approach is your integration of ethnographic and historical methods – especially your self-reflexive ethnohistorical approach. Your voice does not overwhelm the narrative but it also isn’t muted, which makes the book interesting from a methodological perspective. Can you elaborate a little bit on you conception of the relationship between ethnography and history in your work?

Kristy: This is a question that provokes a lot of anxiety. Most books on the Cursillo movement have been rather hagiographical and uncritical. They have characterized the movement either as a call from the Holy Spirit or as the worst thing that has happened to the church. This criticism sometimes even takes on a psychoanalytical bent, describing Cursillo as “brainwashing.” So I obviously wanted to occupy an in-between space, to have some critique but also to present an empathetic account. I thought a lot about how and when to include my own voice. Where I included my own voice, I’m using it to elucidate something broader, such as how I felt as a Protestant Christian making the Catholic Cursillo. It was a great weekend. But in the book I included how I didn't realize the extent to which it would upset me when I was denied the Eucharist. [As an American religious historian familiar quite with Catholicism] I knew intuitively, intellectually that this would happen. When it was explained to me beforehand, I said I completely understood. But when it occurred I really felt like I wasn’t included and I thought, “I'm going to write about this, because this is precisely what many Protestants have felt.” Many Protestants I interviewed who made a Catholic Cursillo before Protestants developed their own versions of the retreat said precisely the same thing. In that moment I felt hurt, I felt like an outsider, and I thought this was a place where inserting my voice would highlight these other stories I've been told. So that was my rule of thumb…I use my voice in order to make larger points.

Matthew: The Cursillo Movement in America makes a number of broad historiographical interventions in American religious history. There are moments when you throw down the proverbial gauntlet down. For instance, you note that many people might describe the Protestant and Catholic offshoots of Cursillo as “evangelical,” from a phenomenological perspective. After all, the movement emphasizes individual spiritual experience and developing a personal relationship with Jesus Christ. Yet you point out that the origins of this movement are not the American Great Awakenings but rather mid-twentieth century Mallorquín Spanish Catholicism. One of the surprising stories here is how Spanish Catholicism and the Second Vatican Council played foundational roles in American evangelical culture. Can you expand on these broader historiographical contributions? 1940s Spanish Catholicism and the second Vatican Council might have a foundational role in American Evangelicalism and evangelical culture is a rather profound point.

Kristy: Before I got into Catholic Studies, I was really studying nineteenth-century Protestants, but I became really tired of how everything goes back to the Second Great Awakening or Jonathan Edwards. I'm weary of that paradigm, the assumption that anything that is interesting and everything that has an evangelical flavor or fervor somehow goes back to Puritans, post-Puritans, and neo-Puritans…One of the problems with this pervasive Protestant narrative is that nothing originates with Catholics. Actually, this movement originated with Spanish Catholics as well as U.S. Catholics…This also presented an opportunity to convince my readers of the centrality of Latinos to such an important strand of Christian spirituality. They were the ones that originally popularized the movement in the Southwest – Anglo-Catholics picked up on what was going on, but Mexican-American Catholics in the Southwest were the first ones to make the weekend. So I think what I tried to do with this project is to show the centrality of Latinos, to bring the more to the center of the conversation rather than at the periphery.

Matthew: The subtitle of the book is “Catholics, Protestants, and Fourth-Day Spirituality.” One could read the book as part and parcel of the nascent literature on spirituality. Do think your work confirms or challenges emergent understandings of spirituality as a concept, or even the category of “spiritual but not religious”?

Kristy: The Cursillo movement fits well with what scholars are saying about emergent spirituality, since most of my interlocutors prefer to use the language of “spirituality” over “religion.” And that word meant something that isn’t flaky to them – it meant something to them, something concrete. It wasn't this nebulous thing. I think what they mean by [this distinction] is that religion is something that they inherited generationally, ethnically, as part of their Catholic or Protestant faith. But they feel that this weekend gives them a freedom to explore and express themselves in ways that they might not be able to you in a congregational setting or parish setting. My interlocutors intentionally use the language of spirituality, they really thought about it…I think until recently, academics considered “spirituality” this fluffy, light designation whereas religion means something more solid and concrete. But, going back to the earlier question about relationships, it is the relationships that form on the Cursillo weekend that really caused me to think a lot about the meanings of this. They rarely use “religion.” They always used “spirituality.” Why are they choosing “spirituality”? Well, it is because it means something to them.
Email Post
Labels: author interviews catholicism evangelcalism Latino/a religion Matthew's posts spirituality