The Religion Department at Florida State University was lucky enough to host Leigh Schmidt from the Danforth Center at Washington University this week for the Charles T. Wellborn lecture in American religious history. Schmidt’s talk, “Public Atheism: An American History,” focused on his current research project.

In his talk Schmidt focused on three moments in the history of American public atheism, each featuring different strategies for carving out a public space for nonbelief and asserting some kind of influence on the public sphere. These moments provide landmarks in the history of an American public sphere that once categorized blasphemy as a potentially capital offense and now observes the “rise” of the nones. The first moment was the revolutionary deism of the late eighteenth century and into the early American republic. Thomas Paine and later tributes to Paine were more of a diffuse threat to Protestant hegemony than an organized force but these later tributes testify to the lingering influence of Paine. In the earlier colonial era, there was both a legal and a social privileging of belief, namely Christian belief. One need only think of Paine’s influence and how his lack of “proper” belief and his association with the French Revolution cost him his reputation. The bridge between this first period in public atheism to the next could be easily seen in the visual culture tributes and memorializations to Paine, specifically in Watson Heston’s cartoons in the Truth Seeker. One particular cartoon contrasted Paine as the defender of liberty and a tyrannical John Wesley; while one stood for American patriotism, the other was a symbol of corrupt power. 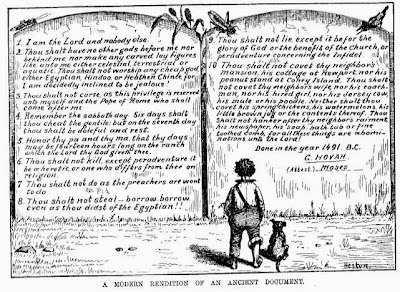 The second moment was the liberal secularism of the late nineteenth century. This group imagined themselves vis-à-vis the idea of America as a Christian nation. The National Liberal League and the American Secular Union advocated for a secular republic in which religious freedom applied to the irreligious as well as the religious. These groups vocalized a number of demands including the taxation of churches, the end of religious chaplains in public spaces, the removal of the bible from public schools, and the repeal of Sabbatarian laws. The images accompanying Schmidt’s lecture here were telling. Hopefully many of these make it into the book. My favorite was a cartoon depicting a mechanized "automatic chaplain" as a kind of sardonic replacement for religious chaplains. The machine was more or less a coin-operated chaplain in-a-box puppet that one knelt before and paid a nickel for a blessing.

The third moment was that of active atheism in the 1920s and 1930s. Chapters for the American Association for the Advancement of Atheism operated on college campuses across the US, with “The Damned Souls” at the University of Rochester being one of the most noteworthy. The 4A’s founder Charles Lee Smith gained the public’s attention in 1928 when he opened a storefront in Little Rock, Arkansas and distributed what Time called “godless propaganda.” He was arrested for blasphemy after repeatedly mailing the literature to local clergy.

Schmidt’s lecture left me eager for his forthcoming book, and the forthcoming work of Stephen Tuck who is currently researching black religious skepticism and civil rights in the early twentieth century. This kind of scholarly work not only opens up our narratives of American religious history but also the ways we conceive of the relationship between religion and politics. (Note: neither of these images were in Schmidt's talk, but these Heston cartoons are similar.)
Email Post
Labels: atheism Distinguished Lectures emily's posts FSU irreligion

Edward J. Blum said…
thanks for the summary and questions Emily. I, too, am curious about how race factors into this, especially since Curtis Evans and Barbara Dianne Savage have written so convincingly about the "burden" of black religion/church
October 25, 2013 at 9:53 AM