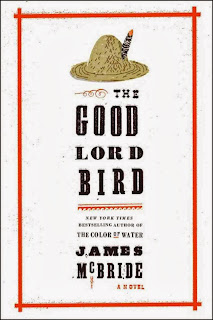 In his famous response to the conviction and sentencing of John Brown, Henry David Thoreau seized on the popular sentiment that Brown was insane. He poked at the idea by first questioning how people should understand those men who followed Brown personally, or those who celebrated his actions - were they all insane, too? Thoreau then suggested that if his words and actions were held up against the words and actions of congress, the “manly directness and force,” the “simple truth” of “crazy John Brown” would stand out against the inaction and deceitful eloquence of the political elite. Thoreau turned the tables on those who sought to discount Brown by diminishing the truth of his words or the courage of his convictions: I do not believe that Brown is insane, he seemed to say, but I’m not so sure about the rest of you.
In his recent novel, The Good Lord Bird, James McBride also plays with the theme of Brown’s potential insanity. The Good Lord Bird is a bit of satirical historical fiction, a clever and often hilarious retelling of the John Brown story through the eyes and voice of a young slave named Henry (although a series of misunderstandings result in Henry’s masquerading as a young girl named Henrietta for much of the story). A dark comedy of errors puts Henry within Brown’s ragtag outfit in Kansas, and despite his efforts to escape from Brown’s tutelage and conscription on several occasions, he is always pulled back in by one means or another. He quickly becomes a favorite of Brown, who refers to him/her lovingly as “Onion,” and Onion’s presence gives us a fictional first-person view of Brown’s encounters with Frederick Douglass and Harriet Tubman, of Brown delivering stump speeches on a fundraising trail, and, of course, of seminal bloody events across the Midwest and at Harper’s Ferry.


The Good Lord Bird is a joy to read for any number of reasons. First and foremost, it is beautifully written and surprisingly funny. Unflinchingly irreverent, it refuses to draw clean lines between the good guys and the bad, between the abolitionists and the pro-slavery folk. Instead, McBride illustrates the fuzzy intersections of the slavery debate, telling of men who switch sides for practical reasons or of slaves who see the nascent war as a white man’s war that probably won’t do them any good no matter what, and thus want nothing to do with it. McBride has done a phenomenal job at bringing Onion’s voice to life; it is an immersive and evocative voice, one that subtly weaves the experience of the antebellum frontier and of slavery with the narration of Brown’s often unpredictable violence. What Onion sees on the road with Brown and his men is messy and convoluted on all sides: ideologically, practically, and emotionally. As Onion tries to piece it all together, so does the reader.
It is also messy in terms of religion. McBride’s sardonic portrait of Brown is one of intense religiosity. Brown prays constantly, aloud and in silence, and often for much longer than Onion would prefer. Virtually every sentence that comes out of Brown’s mouth refers to scripture or to God’s providence, and he speaks in a sort of hybrid of King James-inspired loftiness and distilled country simplicity. The result is both hilarious and absurd. While negotiating with a federal agent to delay his own arrest, Brown is asked “on whose authority” he seeks to free the slaves. Brown’s response is typical: “The authority of our Maker, henceforth and forevermore known as the King of Kings and Lord of Lords.” Such monikers for God are stacked to the heavens throughout the text, with a single proclamation often containing three or four in a row; he is the Great Haymaker, our Most Holy Martyr, the Holy Redeemer, the Man of Trinity, and the list goes on. Brown marches into battle with little regard for the bullets that fly around him, often standing still in the very center of the action while contemplating some tactical problem, or having a discussion about some trivial matter that could probably wait until death itself was not so near. Brown is almost detached from reality, interpreting events as he sees fit (or as he believes God intends them to be interpreted). And insofar as Brown himself is portrayed as ineffectual, Brown’s success, his repeated defiance of and escape from pro-slavery militants and federal agents alike, only adds to his mystique.
It would be a mistake, however, to understand McBride’s reading of Brown’s religious motivation as superficial or foolish. On the contrary, McBride takes Brown and his religiosity very seriously, placing moral imperatives and notions of divine justice at the center of Brown’s entire being and character. McBride’s satire builds toward an image of absolute audacity on the part of Brown, forcing the reader to wrestle with how, exactly, Brown mustered the gumption to enter into holy war. He consistently faces situations where he is outnumbered and outgunned and he knows it, yet he marches on and strikes the first blow. What inspires such audacity? What in Brown provides for the dismissal of reality at every turn? In Onion's telling, it is Brown’s sense that he is working on behalf of the divine and for all of His children. On numerous occasions, Onion comments on a sort of divine madness that comes over Brown in the toughest of situations:

“I don’t know what it is, but every time the Old Man started talking holy, just the mention of his Maker’s name made him downright dangerous. A kind of electricity climbed over him. His voice become like gravel scrapin’ a dirt road. Something raised up in him. His old, tired frame dropped away, and in its place stood a man wound up like a death mill. It was a most unsettling thing to see[.]”


Over the course of the book, however, that image of divine madness is compromised and reconsidered, as Onion (and consequently the reader) gets to know Brown beyond the caricature. Brown, beyond the crazy. The key to that is, paradoxically, McBride’s sensitive attention to Brown’s religious devotion.
McBride’s attention to religion is perceptive in other ways, as well. Through Onion’s comments on white religious practices, the reader is encouraged to think about the intersections, the gaps and the overlaps, of Christianity as practiced by whites and blacks alike. We meet ministers who bend to the practicality of being a pro-slaver, or who are for Brown in theory but struggle with Brown in practice. There are subtle nods to Brown’s implicit ecumenism, to the way that common cause against slavery could bridge divisions of belief. Perhaps most notably, the language of the period is shot through with religious references and appeals, so that even a handful of non-believers riding with Brown’s men have to stand and listen to Brown pray for an hour before they can eat. Religion is not a concentrated, definable thing in McBride’s antebellum America. It is inspirational and foundational, a process worked out in action as much as a set of doctrines.
It is easy to forget about Brown’s sense of divine mission and his religiosity as we teach our way through the US History survey, or to gloss over the way that his understanding of Christianity challenged the religious lives of those around him. Although religion is often discussed in Brown-related scholarship, relatively few critical texts have taken Brown’s religious life as a primary subject. (The most thorough I have found in this regard is Louis DeCaro's thoughtful “Fire from the Midst of You”: A Religious Life of John Brown.) McBride’s text is a novel, of course, not a monograph, and he takes great liberties with his subjects. Indeed, the very framework that provides the story hints at the possibility of fiction in the archives, as it is purportedly a second-hand recounting of Onion’s story as related through a friend of Onion’s, and found many years later in an old church building. But as good novels often do, The Good Lord Bird interprets the story of John Brown in a very meaningful and even critical way, raising questions about morality and religion, violence, the black experience in antebellum America, and perhaps even the question of Brown's own sanity. If you need a bit of a reprieve from those mid-semester blues and can tear yourself away from your grading and research, it is well worth the read.

John G. Turner said…
Thanks for this. Russell Banks's Cloudsplitter is one of my favorite novels, so I'm predisposed to like Brown-themed fiction.
October 7, 2013 at 11:15 AM

Trevor Burrows said…
I have not read Cloudsplitter but will definitely check it out. Thanks!
October 8, 2013 at 6:23 AM