I was around 7 years old, it was my birthday party and my first self-realization of who I was became clear as my father, never an activist type, placed a "Chicano Power" patch on my blouse. The brown raised fist was nothing I was familiar with, and nothing I had seen anyone in my family wear--so the curiosity was planted--what was this Chicano Power? and why interrupt my birthday party with such political symbolism certainly totally lost on all of us 7-year olds lining up for the piñata? 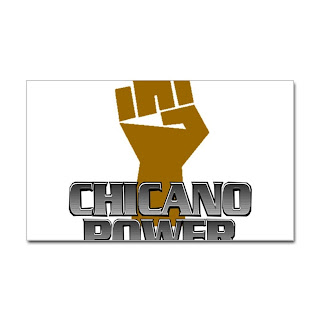 Tomorrow is the 43rd anniversary of the Chicano Moratorium, one of the largest anti-Vietnam war protests in Los Angeles (30,000) and at that time in the U.S. It took place literally steps away from where I grew up. The protesters had a litany of grievances--chief among them was a "moratorium" against the sending over more Latino/a draftees to Vietnam.  There were also grievances against the dual educational system that existed in Los Angeles at the time,  (and to a large extent, still does), grievances against police brutality, and among some of the organizers of the Chicano Moratorium, an insistence that the religious institution that many Chicanos called their spiritual home, the Roman Catholic church, begin to take their interests seriously.  Historian Mario T. García calls the activist coming of age among 1960s/70s Chicanos, the "Political Catholic" phase, particularly among a group of activists organized by Ricardo Cruz, leader of Católicos Por La Raza (CPLR) 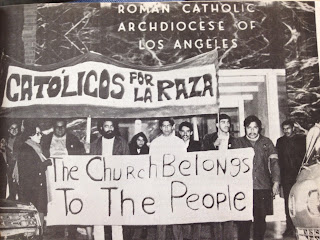 Cruz was born in the Highland Park section of Los Angeles, while a college student at California State University Los Angeles, he and a group of friends founded CPLR in response to the neglect Chicanos experienced in the Archdiocese of Los Angeles under the conservative reign of Cardinal Francis McIntyre.  CPLR's demanded the Archdiocese allocate resources for parochial schools equally, for more Latino and/or Spanish-speaking priests, and for the Church to became more active on the side of those Latinos/as suffering from poverty. Perhaps the CPLR's boldest action was a prayer vigil in December 1969 at the newly opened St. Basil's church on Wilshire Blvd., built in one of the richest neighborhoods in LA. as predominately Chicano parish churches and schools were closing.  CPLR held the vigil/protest insisting that McIntyre meet with them to discuss issues relevant to the Chicano/a community. The evening did not end well, and the protesters kept. coming back until they were arrested.  CPLR held an "alternative Mass" on Christmas Eve of 1969 with activist priest Fr. Blasé Bonpane presiding--using tortillas for communion.  This mass raised the ire of the Archdiocese, who viewed Bonpane as a trouble-maker from his days as an activist priest who'd been "kicked out " of Guatemala. 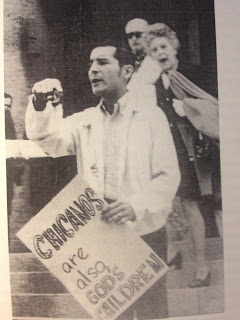 As many CPLR members were untangling themselves from legal issues stemming from their St. Basil's protest, (they were defended by legendary Chicano activist lawyer Oscar "Zeta" Acosta)--who, if you have only seen him depicted by Benicio De La Torre in "Fear and Loathing in Las Vegas"--would lead you to believe that he was simply too drunk and drug-addled to be an effective advocate…to the contrary, Acosta was effective and all CPLR protesters were acquitted.  By 1970, Cardinal McIntyre retired, making way for a more sympathetic leader, Timothy Manning, who supported changes to allocating resources, brought in more Latino and Spanish-Speaking priests, and even helped Ricardo Cruz obtain his law license. 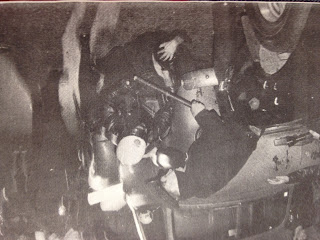 CPLR helped organize the Chicano Moratorium, which began in the morning at Belvedere Park, and was supposed to end peacefully later that day at another park in East Los Angeles.  There were skirmishes and police action which ended in the still controversial death of Los Angeles Times journalist Ruben Salazar.  The CLPR's activities were folded into the ongoing work of the Archdiocese to include more Latinos/as in its work--and since the U.S. Catholic church is now fully 1/3 Latino/a--well, its now a demographic certainty that the Church of McIntyre and Manning no longer exists. 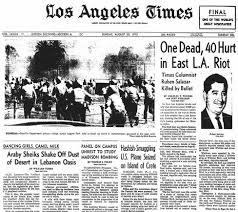 Cruz went on to become a lawyer, whose most famous case was exposing the forced sterilization of Latinas at LA County/USC Medical Center in the 1970s. I actually kept that blouse with my torn Chicano Power patch, but eventually, like most kid's clothes--I played my way out of them.  As I wandered through high school, and eventually college--I worked my way through my undergrad years at the East Los Angeles library--putting books away and reading about the history of where I grew up.  One day, I was approached by an elderly woman who asked me if we had any materials on the Chicano Moratorium--I knew we did, so I showed her the special collections that we had--picture files, copies of La Raza--the official magazine of the Chicano movement, and assorted other materials. She told me that her son had marched, and that he'd been beaten up by the Los Angeles County Sheriffs--of which I had no doubt.  She grew wistful and asked me if I'd ever heard of the Moratorium and what happened --I told her that I knew and she seemed satisfied.  Before she walked away she remarked  "You know mija, that clinic across the street (Edward J. Roybal Health Clinic), and this library (East Los Angeles Public Library), they would not be here if it weren't for my son--this place was bought with blood."
Email Post

Unknown said…
Thank you for this exciting post Arlene! You've sparked a few questions that I haven't seen much scholarship on. How did Cruz and other Chicano power leaders experience Vatican II? Were the "Catholic 60s" dramatically different for Latino/as than for other American Catholics?

Finally, your elderly neighbor's invocation of blood is deeply moving. But her words also suggest that Cruz's group may have bridged a divide we sometimes imagine between "traditional" devotionalist immigrants and "progressive" activists such as the Berrigan brothers.

Arlene Sanchez Walsh said…
Brian: thanks for your kind words. Latino/a Catholics were and still are largely a product of the popular church, as such, their devotional lives, political lives as Catholics are driven by familial and communal ties and Mexican religious culture and not as much by American institutional Catholicism. Las Hermanas by my colleague Lara Medina might help you there.
The older woman's comment is indicative of the idea that it took blood in the streets for East Los Angeles to get public services, educational equity....I did not get the sense that she was relating her story to a religious sensibility. But certainly Ricardo Cruz would have--his papers are at UCSB
Hope this helps!