Jeff Sharlet on faith and faithlessness in America, a repost

This post originally appeared in December 2011, but I thought I might repost it today as I highly recommend Jeff Sharlet's Sweet Heaven When I Die to anyone looking for a great read on religion/irreligion in contemporary American culture. The comments from the previous post are definitely worth reading, and they can be found here. 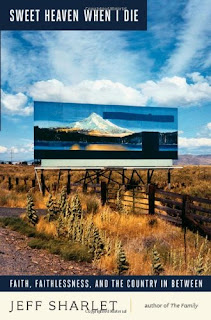 Beefsteaks when I'm hungry
Something tall and cool when I'm dry
Give me greenbacks when the times are hard
Sweet heaven when I die--Blue Dogs, "Sweet Heaven When I Die"

While reading and re-reading Jeff Sharlet'sSweet Heaven When I Die: Faith, Faithlessness, and the Country in Between, a couple of songs replayed over and over in my head. His lovely and haunting collections of essays made my thinking musical. Perhaps, it is the beauty of his language, the lyrical quality of his descriptions, that direct me to hymns and pop songs (which is on my taste, not Sharlet's). Perhaps, it is because his reflections on religion, trauma, belief, unbelief, practice and loss feel like poetry. I cannot read his book without music, so songs emerged as the beginnings of my analysis. Every time I started to review this book, the music came to me first. Music evoked spaces I once inhabited as well as spaces in which I currently reside. Thus, I cannot review his book without referring to the accompaniment of music (and please note that John D. Boy at the Immanent Frame also feels this way). Hopefully, Sharlet will not mind since music appears in his work from Cornel West as "blues man" to a club named "the Church" to Creedence Clearwater Revival to Dock Boggs' "Down South Blues" to the songs playing at Sweet Fanny Adams, the motel and bar. Maybe the music even puzzles him a bit too.

The first song starts playing as soon as I see the title, Sweet Heaven When I Die, which my brain somehow translates into "When I die, Hallelujah, by and by" from the Christian hymn, "I'll Fly Away." I misread his title every time I puzzle over the image on the cover. Somehow humming this tune seemed to fit with Sharlet's explorations and excavations of the religious lives of Americans from his college sweetheart's continual return to the Bible to make meaning to the martyrdom of an anarchist to militarization of Christian youth in BattleCry to worship with German evangelicals and the construction of purity. Sharlet, as Brent Plate puts it, catalogs "weird religion." Sharlet's approach both deeply personal and documentary showcases individuals trying to make sense of their lives, their traumas, as well as attempts to create meaning out of chaos. His interlocutors try to find justice, try to heal themselves and others and try to navigate expected and unexpected losses.

Sharlet gives us glimpses into American religions writ small, individuals navigating worlds of faith. He writes about Molly Knott Chilson, his college girlfriend, "Her liberalism became Christian, and her Christianity was gentle and yet thick with the blood of scripture: the darkest passages of the prophets to which she's always been drawn..." (12). Or Cornel West: "His religion is that of the night side of scripture, the prophets of the Hebrew Bible and a Christ story as awful as it is redeeming" (50). Or Chava Rosenburg's writing about the Holocaust: "Beauty, not God, sustained her" (132). Vera Schnabel, his interpreter at the German Church of the Way, embraced both Jesus and America via music (and she also hums "I'll Fly Away). Sharlet writes about her conversion:

The song lifted her up high, and up there in the sky she was an angel, just like her black brothers and sisters. She wasn't an America, she wasn't German, she was nothing: She disappeared into the clouds and came out the other side a believer(153).

Moreover, Sharlet catalogs the development of American fundamentalism from the perspective of not only Ron Luce, the founder of BattleCry, but also the young adults at his Honor Academy as they struggle with sin, sexuality and "secularism." The specters of gender loom large in "She Said Yes," as Honor Academy attendees confront limited gender norms as sexuality becomes the language for and of sin. Moreover, Sharlet does not shy away from issues that make religious people and scholars of religion nervous. He tries to figure out the "price tag" of religious movements without turning to discussions of charlatanism or inautheniticity. While following a New Age healer, he notes, "You get what you pay for" (198) without snark. Capitalism resides in religion and spirituality (just ask Darren Grem orRichard King).

The second, likely more trite, song is a pop song. Sharlet cajoles, "Pop is religion, a source of stories and a conduit for myths, the smoke and mirrors by which large groups of people get together and...get 'vulnerable'" (225-226). I heard it on the radio (it stuck with me, haunted me, maybe). "If I Die Young" by the Band Perry reflects on loss, trauma and the "sharp knife of a short life" in a slightly off-kilter melody that reverberates. Sharlet also navigates loss, trauma and the lack of meaning (see also John Corrigan on meaninglessness). Many of the essays circle the trauma of every day life, unintended hurt and the loss of loved ones. In "Bad Moon Rising," the memory of the author's dead mother and uncle haunts while accompanied to the CCR song of the title. Cornel West discusses "death shudders," despair and coming to terms with the "reality of death, ordinary life--waiting to die, living as you never will" (60). In the last essay of the collection, "Born, Again," the life of Dock Boggs is juxtaposed with the loss of a friend's infant and a meditation on "quitting." Sharlet pens:

An input of energy results in motion. Simple math, nothing more than 2+2=4. Pages pile up and become books; babies grow up and become children.

The belief that either will necessarily prosper...that "things will work out," is grotesque: tragic and comic at the same time, funny because it's sad, sad because it's funny, awful because it just might be true. Seen from a distance, through a telescope or at the far remove of "art," a story or a painting or a poem or a song [or scholarship?], both the most mundane of expectations...are the painful spectacle, grievous mismatches of desire and power, of want and the ability to make it so(248-249).

All of Sharlet's interlocutors, his conversants, his interviewees, seek to manage trauma. How do we manage when ordinary life is about wounds rather than hope? How do we make sense of hurt, trauma, death, quitting, capitalism, consumerism, spirituality, music, art, or religion? (Or do we?) What do we do in the grips of a "death shudder"? Sharlet's Sweet Heaven When I Die flirts with old questions of suffering and meaning while suggesting that folks are just "trying to become human" but "not there yet" (259).

But this also proves useful to those of us who "write" religion as our scholarship. Sharlet's work pushes me to think about how we write the lives of our contemporaries or those long dead. How do we write trauma? How are scholars making meaning out of the messiness of individual lives? Or should we embrace the meaningless as an analytic frame too? What happens when we pay attention to religion writ small? What kinds of stories do we gain? And what kind of stories do we lose? The work evokes, and songs become my analysis, which makes me wonder how art can be helpful in our interpretations (Jason Bivins and Julie Bryne likely have much more to say about this). Why does this book come to me in song?
Email Post
Labels: baker's posts books religion and popular culture religion in civic life reposts reviews