The Creation(ist) Tour in a Secular Age: Reprise of an RiAH Classic. Or: Why There is Almost No HOpe for America.

Editorial Note: Our esteemed co-blogmeister Randall Stephens is enjoying the fruits of his success presently at a conference at Oxford, and as a result this month doesn't have time to pay his taxes to "the little people" who run this blog. As a result,  and since we are in re-run season anyway, I am reposting one of his contributions from May of last year.

It is especially appropriate to post this now since I just had the great pleasure of hanging out here in Colorado Springs with my buddy Sarah Posner, who was here working for a story for The American Prospect that will appear next week, about Hobby Lobby and its suit concerning the "contraception mandate" in Obamacare, an issue that no doubt will find its way to the Supreme Court in some future session. While she was here, Sarah also visited the "Creation Tour" ("Prepare to Be Amazed") given by the Navigators at Glen Eyrie, the stunningly beautiful headquarters of the group near Garden of the Gods in the western part of Colorado Springs (the campgrounds and headquarters there were mercifully spared during the Waldo Canyon Fire of 2012, which for a time threatened to engulf that entire area). There, she discovered that the massive geologic rock formations in my home area were of recent vintage, dating from the time they were carved by Noah's flood, and that there is of course no evidence for the long history that you would learn in virtually any Geology or Geography course anywhere in the United States, including in most religiously-affiliated colleges, or for that matter in the Visitor's Center for Garden of the Gods park just down the road from Glen Eyrie. That brought to mind the chapter on creationist experts from Randall's book The Anointed, and hence a re-run of the post below.

Randall Stephens
When you're actually getting hate mail and watching conservative Christians rail against you on-line, it is . . . not fun.  But now looking back on how my co-authored book and a couple op-eds Karl Giberson and I wrote were received is sorta entertaining, in a bizarre way. 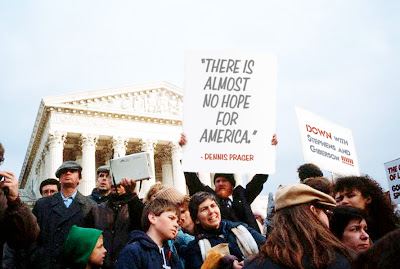 The Anointed: Evangelical Truth in a Secular Age(Harvard, 2011) dealt with the rise and popularity of conservative evangelical experts.  These figures have served as go-to thought leaders on human origins, psychology, end-times theology, history, and more. We looked at the parallel culture of evangelicalism that has helped certain views thrive. And still evangelicalism in modern America is anything but monolithic. We also focused on a collection of evangelical scholars and scientists who are engaged with the fields they represent and tend to have a presence in the academy.
Sure, we did get some very positive reviews in Christian Century, the Wilson Quarterly, Jesus Creed, the Nation, the New York Times, Inside Higher Ed, andBooklist.  Yet, those did not have that red-faced, veins bulging-out-of-the neck, barking jeremiad passion that the haters put out there.
So, I thought it would be interesting to put together excerpts from the "best of the worst" coverage, criticisms of both our opinion pieces and the book.

Caveat: I apologize for what might seem like gross self indulgence.  Bear with me here.  No one threw a brick through my window.  No one wired my bicycle with explosives or put a severed horse head in my bed.  I have a great life and I love that I get to write and teach about some very interesting, controversial subjects.  Besides, we knew going into this project that it would ruffle some of the saints angel feathers.  (It would be nearly impossible to write about evangelical pseudo-expertise without stirring some kind of reaction.)
I post the bits below as a kind of therapy and to air some of the vitriol. We all get bad reviews now and then.  And maybe, just maybe, all publicity is good publicity.  (I doubt that.)  If folks want to buy our book just to burn it, or to read it in agitation, scribbling angry notes in the margins, and spilling coffee on the pages before firing off an ALL CAPS email to me, that's fine!
• Albert Mohler, "Total Capitulation: The Evangelical Surrender of Truth," blog, October 25, 2011
Stephens and Giberson's view "hardly represents an honest or respectful approach to dealing with the Bible’s comprehensive and consistent revelation concerning human sexuality in general and homosexuality in particular. . . . Evangelical Christians will either stand upon the authority and total truthfulness of the Bible, or we will inevitably capitulate to the secular worldview. Giberson and Stephens force us to see, and to acknowledge, the consequences of the evangelical surrender of truth."
• "Arrogance, Intellectual Elitism, Rejection of Scripture, Karl Giberson," Reformed Nazarene blog, October 24, 2011
"Only God knows how many students have had their faith shaken or shipwrecked because of [Giberson's] unbiblical teachings.  Sadly, it seems Dr. Stephens has taken up his mantle at the school and will continue to propagate false notions of the Bible to our students there.  Since they co-wrote this attack on fundamental Bible believers, it goes without saying that they share the same basic contempt for us.  It is a piece brimming with intellectual snobbery, in my opinion."
• Ken Ham, "New York Times Review Fails to Recognize Poor Scholarship,"Answers in Genesis blog, January 8, 2012
"Well the New York Times today has published a book review of The Anointed.  But, because the book attacks people like me who have a high regard for Scriptural authority but supposedly lack any scholarship, I find it highly ironic that the review does not bother to point out the poor scholarship or mistakes in The Anointed. But as usual for such books that attack God’s Word, the Times’ review speaks of it in glowing terms."  AiG's main point--that we said "Dr. James Dobson, founder of Focus on the Family, is a young-earth creationist"--is not true.  In the chapter referred to (pg 19) we said that Dobson "enthusiastically promotes" young-earth creationism.  He did.  I saw it, and actually took pictures of some young earth creationist materials, at the Focus on the Family bookstore while I was out in God's country doing research in 2008.  (It's also Paul Harvey's country. Not that those are mutually exclusive.)
This next one is my favorite, by far! Here Ken Ham tries to turn the fundamentalist thumbscrews on me.  What he doesn't know is that I love thumbscrews.  A pressure point massage for the fingers I always say.
• Ken Ham, "What Does This Nazarene U. Professor Believe," March 15, 2012
"After reading the article, I have come to many conclusions about what Stephens and his coauthor are stating. I hope every Nazarene understands what this Nazarene professor believes—and therefore we assume his beliefs are being transmitted to the students he teaches and influences:

- If you don’t believe in biological evolution, you are anti-knowledge, anti-intellectual, and anti-science.

- Secularists should be believed over the Bible.

- The Bible is not God-breathed.

- “Gay” marriage and homosexual behavior are natural and should not be spoken against.

- Anyone who believes in six literal days of creation and a young earth is anti-intellectual.

- Francis Schaeffer was not a scholar, and his biblical worldview was wrong.

- Absolute Christian morality based on the Bible is wrong."
• Dennis Prager, "Are Evangelicals or University Professors More Irrational? This Jew prefers evangelicals’ values to those of left-wing intellectuals," National Review, October 25, 2012
"With regard to man-made global warming, the charge that all skeptics are anti-science is despicable and indeed, anti-science. . . . With regard to those evangelicals — and for that matter those ultra-orthodox Jews — who believe that the earth is less than 10,000 years old and either that there were no dinosaurs or that they lived alongside human beings, my reaction has always been: So what? . . . If these professors typify the views of Eastern Nazarene College, which is officially listed as a Christian university, it is reason for despair. Once left-wing values enter the evangelical bloodstream, there is almost no hope for America."
• Joe Carter, "A Different Type of Fundamentalist," First Things blog, October 19, 2011
Giberson and Stephens "published an embarrassingly simple-minded op-ed in the New York Times . . . . The irony is that Giberson and Stephens are denouncing their fellow evangelicals when they themselves are as 'anti-intellectual' as Ham or Barton. But while the Hams and Bartons of the world may be merely annoying, the Gibersons and Stephens are completely insufferable."
• And . . . finally, the epic last sentence of an email sent to me on October 25, 2011: "I sincerely hope that some day before you die you will have a change of heart back to the truth."
Email Post
Labels: creationism evangelical conservatism Randall Stephens randall's posts religion and popular culture religion and science

Paul M. said…
Perhaps the "gross self-indulgence" would be lessened if you followed this post up with another listing the less hyperbolic critiques of the book?

For instance, I'd be interested in your response to Rod Dreher's critique that one of your principal arguments is a (fallacious) argument from silence.
July 12, 2013 at 3:12 PM

Randall said…
I take it that you're referring to this:

I regretted that we put that line in the NYT's op-ed about the Bible and homosexual marriage: "Bible does not condemn evolution and says next to nothing about gay marriage." It was meant to have an ironic zing to it, but that doesn't come out. Many others have said it as well, as in this in the LA Times: http://articles.latimes.com/2012/dec/15/opinion/la-le-1215-postscript-bible-gay-marriage-web-20121215

In defense of a line like that one could say that many, many issues people deal with today are not best addressed by answers from the first century or 500 bce. Why it is that conservative Christians insist on making the Old Testament into a science text book, a primer on human sexuality, or a guide on how to discipline children is well beyond me.
July 13, 2013 at 4:14 AM