Sex and Race in New Orleans

We are in the midst of a renaissance in the history of New Orleans, and most of it has to do with sex and race. Three books, in particular, build on the work of Alecia Long’s The Great Southern Babylon: Sex, Race, and Respectability in New Orleans (2005). They put forward the argument that, while New Orleans surely merits a unique status in American history, it also reflects larger trends in American attitudes toward morality and reform throughout the nation.

Judith Schafer, Adjunct Professor of History at Tulane University, begins her book Brothels, Depravity, and Abandoned Women: Illegal Sex in Antebellum New Orleans (2009) with a dialogue between a Catholic priest and a governor of colonial Louisiana. The priest suggested to the governor that he “send away all the disreputable women to raise the moral tone of the colony.” The governor responded, “If I send away all the loose females, there will be no women left here at all.” What follows is a history of prostitution in a city variously described by people then and now as “a perfect Sodom,” “the great southern Babylon,” and “the promised land of harlotry.” A legal historian, Schafer shows us how antebellum lawmakers from New York to New Orleans were in the business of legislating morality, especially when it came to the bodies of women.

Emily Clark, Associate Professor of History at Tulane University, begins her book The Strange History of the American Quadroon: Free Women of Color in the Revolutionary Atlantic World (2013) with Thomas Jefferson’s mathematical analysis of race (Sally Heming = a/4 + A/4 + B/2, or “q (quateroon) being 1/4 negro blood”). Through her focus on the prism of New Orleans, Clark redirects our attention to the rest of the United States: “The presumption that the history of New Orleans and its quadroons is unique diverts the gaze of the rest of the nation away from its own unattractive Atlantic past, allowing it to remain firmly fixed on the less-troubling founding scenes played out on the Mayflower and in Independence Hall.”

And Emily Epstein Landau, History Lecturer at the University of Maryland, begins her book Spectacular Wickedness: Sex, Race, and Memory in Storyville, New Orleans (2013) with a description of the legal and moral fantasies of progressive reformers bent on perpetuating white supremacy and patriarchal power by wrapping a cordon sanitaire around those who practiced sex across the color line. For Landau, the story of New Orleans’ red light district is deeply connected to the emergence of a “racialized sexual morality” at the heart of both Jim Crow and progressivism at the turn of the nineteenth century.

For historians of religion in America, these books serve as prompts for further inquiry into the religious motivations of powerful reformers and those they intended to reform. They also remind us of the frustrating gaps in the archival record. The words and deeds of women of color, as is so often the case, are often difficult to retrieve from the past. Even Landau, who ends Spectacular Wickedness with the words of Abigail Adams—“remember the ladies”—seems almost apologetic for not finding in the archives that which is not there, namely, the personal perspectives of women of color.

In the end, Schafer, Clark, and Landau take us right to the brink of knowing what women of color knew of themselves and the world around them. They leave us wandering the temporally and spatially distant streets, ballrooms, brothels, and homes of New Orleans’ mythologized “quadroons.” They leave us to our own imaginations, but not without some textual and visual cues.

Landau’s online exhibit “Hidden from History: Unknown New Orleans” can aid us in this imaginative enterprise. There we can contemplate the mug shots of women arrested for prostitution in New Orleans. 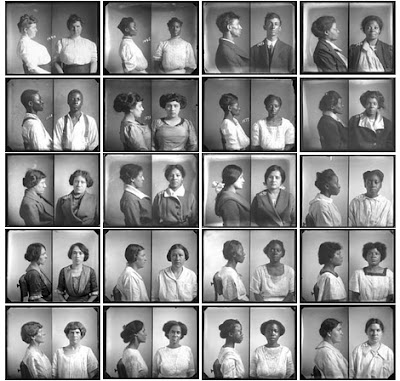 Or pick up a copy of Natasha Trethewey’s Bellocq’s Ophelia (2002). In it, we can travel through the first-person poetic rendering of a woman of color who lived and worked in Storyville, and who was photographed by Ernest Bellocq.

I try to pose as I think he would like—shy
at first, then bolder. I’m not so foolish
that I don’t know this photograph we make
will bear the stamp of his name, not mine.

Historians are not unlike photographers.

esclark said…
Great post Mike, and not just because its on subject matter that fascinates me. I've spent a lot of time wondering about the lives of those who lived, worked, and legislating in and around Storyville and other prostitution districts in the city. The seeming dearth of primary sources from the lives of those engaged in prostitution and concubinage is so frustrating, which is why Long's, Schafer's, Clark's and Landeau's work is so commendable. At least one dissertation idea (my original one on sex, prostitution, and religion in NOLA) died with the lack of easily accessible and evident sources.

Paul Harvey said…
Outstanding, Mike, and a second to Emily's suggestion to watch your doc. if they haven't already.
July 24, 2013 at 9:23 AM