Religion "Where Cool Was Born"

Unless you have lived in central Indiana, you almost certainly do not know where cool was born. I grew up there, so I know that the answer is Fairmount. Despite having a population under 3,000, the little town boasts two famous native sons--James Dean (the cool one) and Jim Davis (the somewhat less cool creator of the Garfield comic strip)--and at least two notable religious history sites, Back Creek Friends Church and Bethel Tabernacle. And so, on a blog on which "regional" almost always means Western or Southern, today I'll add a splash of local color from the rural Midwest. For most of you, this will be a virtual side trip to a place you'll likely never visit. For me, it's a reminder of the ways my unconscious assumptions about what's normal or familiar in American religion, versus what's exotic or in need of explanation, continue to be shaped by the place I come from. 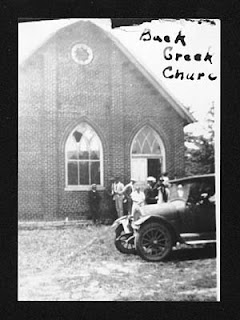 I knew little about Back Creek Friends Church when I lived a few miles from it, except that it was the church James Dean attended in his youth. In fact, it still held a memorial service for him every fall during James Dean Days. It's hard to say what influence Quakerism might have had on the Rebel Without a Cause. He certainly was known for being silent.

Now, thanks to a Marion High School wiki (public history in action!), I find that Back Creek Friends is both quite old and quite interesting. Established by a group of Quakers who migrated from the Carolinas in the 1820s, the church has occupied its current meetinghouse (pictured) since 1899. Membership was around 440 at the time, buoyed by a natural gas boom that had brought abundant jobs in glass making to the area. Ball State University, named for the canning jar family, is nearby, as are the towns of Gas City and Gaston, all reminders of the short-lived boom. Makes you wonder what monuments, intentional or incidental, are being built near fracking sites today.

Also interesting, the first official pastor at Back Creek Friends was an 18-year-old woman, Ruth (Elliot) Carey. She assumed leadership of the church in 1873 and was married there in 1875. The Centennial History of Grant County, Indiana, 1812-1912 described Mrs. Carey as "one of the ablest exhorters to be found among ministers of the church body" and claimed that "few have wielded a greater influence for good than has Mrs. Carey wherever she has gone." I often tell my Presbyterian seminarians that there were female clergy in America before the mid-20th century, but I'm not sure they believe me.

Bethel Tabernacle stands at Fairmount Wesleyan Camp, just north of the Friends church. I attended a summer revival there once with my high school youth group, so I knew that the building was old. According to a Fairmount Historical Museum publication, the campground has been in use since 1895, and the cavernous, barn-like tabernacle dates to roughly 1900. It accommodates 1,500 people and all of the A/V equipment needed to tape a Bill Gaither special. If the name Bill Gaither doesn't ring a bell, that's more evidence that you've never lived in central Indiana.

On the many occasions I've driven by the camp, however, I'm more struck by the tiny cabins that surround the tabernacle. (Some are visible in a picture at the 3:57 mark on this video.) They remind me of Peter's idea, in Matthew 17, to build shelters on the Mount of Transfiguration. They also remind me of slave cabins on a plantation. Though I imagine they're newer than the tabernacle, for me they root the place even more firmly in the past. The camp isn't just a historic place to visit, but one you can inhabit on a vacation from both the place and the time where you usually live.

By virtue of their age, Back Creek Friends and Bethel Tabernacle are out of the ordinary, even for Fairmount. Nonetheless, they and other local sites significantly influenced what I expect people to "just know" about American religion. Of course Quakers exist outside 18th-century Philadelphia. Of course Cane Ridge-type revivals still happen, albeit with amplifiers and air conditioning. And of course there are differences between Methodists, Wesleyans, and Nazarenes--Methodists have to get a new pastor every three years, Wesleyans worry about losing their salvation, and Nazarene kids can't wear shorts in the summer. Everybody knows that!

Only, everybody doesn't know that. They know, and assume, other things. Meanwhile, big chunks of what I think I know (especially stuff I picked up by osmosis, long before grad school) aren't quite accurate. What did you think about American religion when you were 16? Which of those ideas have you discarded, and which remain?

pablo paz said…
I've been to Back Creek Meeting and to Jimmy D's grave, not far from where my cousin was buried. She was born on Rush Hill just north of Fairmount --her ancestor being one of three Quaker men from NC who came scouting land for them to move out of the South ca. 1819, chose the site and helped locate Fairmount Friends Meeting in the town. Fairmount didn't get a pastor till a little later than Back Cr. and still had a few elders who called Friends thee in the early 20th C. But their building is newer. And none of the Quaker distinctives was true when James was a kid during WW2. Maybe that's why he could be so cool?
August 10, 2013 at 4:06 AM