Religion, Secularism, and Book Art; Or, a Religious Historian Stumbles into a Gallery

You never know when you'll bump into something extraordinary. Like maybe this: 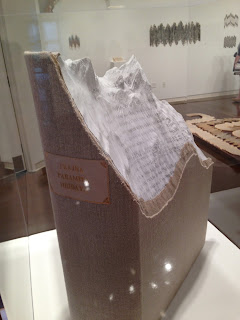 A mountain carved out of a book. But not just any book, carved out of the 1000 Impressions of Prajna Paramita Hridaya Sutra, better known as the Heart Sutra. This sculpture by artist Guy Laramee is part of an exhibit titled Rebound: Dissections and Excavations in Book Art that I stumbled across yesterday while visiting my alma mater, the College of Charleston with my family. Hosted by the Halsey Institute of Contemporary Art, the exhibit's more religiously themed pieces fascinated me.

Laramee has carved a mountain out of a Buddhist text. Upon further inspection, it is a Buddhist text translated into English and bound up in a large book. East meets West meets a knife.

Laramee claims that in his work "mountains of disused knowledge return to what they really are: mountains." But is the Heart Sutra really disused? Wu-Tang Clan used it. So did The Clash. And let's not forget Allen Ginsberg. Yet, it is still rendered a mountain.

Another artist in the exhibit, Long-Bin Chen, takes the reverse approach. Born in Taiwan but now living and working in New York, Chen uses auction catalogs to sculpt the Buddha.

His work titled "The Wheel" represents the heads stolen from Buddha statues in the East, replacing them with his own heads fashioned from the names of New Yorkers torn out of the phonebook.

Before I encountered Laramee and Chen in the gallery, my first impression of the Rebound exhibit was of its utter Protestantism. Whether it was a celebration of the book or a eulogy for the book in the digital age I wasn't sure. But either way, the exhibit argued for the importance of the book. The Word as Art.

Laramee's sutra mountain shifted my Protestant reading. Here was the Protestantization of the East--the Buddha's words bound in English. Then carved away into a mountain--a gray image of primitive rock. I saw in Laramee's work a narrative of American religious history. Protestant power--the book that encases even the East's religious knowledge--eroded to reveal a gray mountain with no gods. In a word: secularism. In one object, the erosion of Protestant power and the emergence of what was beneath it all along. This is only one reading of the piece and of the history--but I think it's there.

In Chen's pieces lie a different narrative of American religious history. Bodhidharma brought the Buddha's teachings to China. He built the early Buddhist network that spread the Dharma throughout East Asia. And now he himself is built out of the remnants of our telephone network. Laramee argued for disused knowledge, but what is more disused than a phonebook these days? Might a phonebook be as ancient as the Buddhist monk?

Chen's pieces also tell the story of a Buddhism in America fashioned from American materials. The Buddha and Bodhidharma are chock full of New Yorkers. They are formed with pages that contain the names of Catholics, Jews, Protestants, nones, Hindus, Buddhists, and all sorts of people. In the great hodge-podge pluralism of Manhattan, Chen sees the face of Buddha--the heads of Buddha stolen by the West so long ago. If colonialism decapitated Buddhas, Chen's art seeks to restore the Buddha with American made materials.

rjc said…
Michael, you might be interested in checking out Linda Ekstrom's work. She's an artist in Santa Barbara who has done a lot with the Bible in particular. http://www.lindaekstrom.com/
July 2, 2013 at 10:07 AM