Is there a American Radical Tradition? Is it a Faith-Tradition?

Is there an American Radical Tradition in the United States? That is, was there a continuous thread of American leftist ideas which have been passed on through generations through political parties and important individuals? What evidence would you need to convince you that there is?

In his recent book, Prophetic Encounters: Religion and the American Radical Tradition, Dan McKanan takes this relative continuity of an American radical tradition as fact. He uses it to argue that this "American radical tradition" is yet another of our American prophetic traditions--another set of believers committed to belief in a relatively similar picture of a better world. For this reason, this Radical Tradition ought to be understood as a kind of religious tradition. 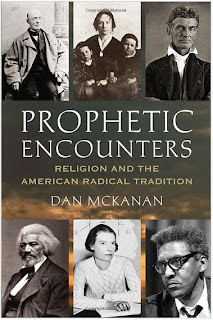 "When we see that religious practices, ideas, and institutions are thoroughly intertwined with the Left, we will be able to tell richer stories from every epoch of American radical history. No single book, of course, can rewrite the history of radicalism. My goal is to highlight important religious threads within the fabric of the Left....

In telling the story of religion and radicalism, I recognize that some readers who share a commitment to liberty, equality, and solidarity will not embrace the 'Left' and "radical" labels. Some activists who appear in this narrative shared that reluctance...

Today's radicals inherit a rich tradition, a heritage of prophetic forebears who struggled against enormous odds, won signal victories, and created a repertoire of practices that we may adapt to the challenges of today...."

McKanan chronologically sketches selected radical visions from a wide assortment of American radical communities of faith, and shows how their oppositional stance toward the religious and cultural authorities of their day, combined with their common set of beliefs in a better world, qualifies their tradition as a community of faith.

I find the book eminently readable and a wonderfully provocative discussion piece for an undergraduate course in American Religion, American Radicalism, or American Politics.  (In fact, I think it would pair wonderfully with Kip Kosek's book on the nonviolent tradition, as the conclusions the two scholars reach about the most important "origins" of Christian nonviolence are ultimately quite different. Kosek finds the Fellowship of Reconciliation a more-or-less Christian tradition, while McKanan's work insists that it really deserves a different context.)

Truth be told, I am not sure what I think yet, because I am still stuck on the suggestion that there is such a thing as an American Radical Tradition in this country.


Sure, there is an American Marxist tradition. Paul and Mary Jo Buhle have done, and continue to do, terrific work in tracing this lineage. This book on the formal Marxist tradition overall and this one on the role of women in American socialist traditions have been some of my favorite books on the subject. In great contrast to McKanan's premises, they both build off the argument made by historians in the 1950s that there are multiple Leftist/Marxist traditions in the United States. They even created an encyclopedia to help us keep track of all these!

The different radical groups can be traced in dozens of directions, but the Buhles and most other historians of the Left generally agree that these Leftists must overall be grouped into at least two categories-- those which migrated to the United States from Europe (German and Russian in particular, especially after the revolutions of 1848), and those which derived from the American experimentalist and agrarian traditions. This binary is likely false (as all dichotomies are), but there are good reasons historians continue to use the categories in a broad sense. Most importantly, the European radical traditions derived from a mixture of rural peasants and urban, proletarianized workers, while the American radicals grew from a tradition of settler colonialism and American slavery. Even if we don't believe in American exceptionalism, we must admit that the US had a Civil War around the same time others had a socialist revolution.

American historians of the Left recognize that over course of the late nineteenth and early twentieth centuries, these European and settler-colonial traditions mixed in the United States, and the distinction among them became less important and less clear as different groups aligned for common causes. But, scholars of the American Left usually emphasize that there were always multiple and very furiously competing visions for what a "Cooperative Commonwealth" should look like. This fact was further made obvious by the in-fighting among the politicized American working classes in response to the European revolutions of 1848, the American Civil War, and the Russian Revolutions in 1905 and 1919.

Now, I say all this not to dismiss McKanan's argument, but to highlight the ways that his suggestion that we can even do a history of "the American Radical Tradition" is truly provocative. McKanan suggests that all these distinctions among Leftists, and in dividing Leftists from reformers or Progressives, are much less important than one has been led to believe. He defies demands that wealthy abolitionists are really that different from radical socialists two generations later, because his emphasis is that the specific content of their ideas is less important than their positionality relative to the dominant American cultural and religious traditions. He even examines Wiccans as part of this prophetic radical tradition, suggesting that Christians, Jews, freethinkers and atheists have no monopoly on the American radical tradition.

As an historian of religion in the American Left, I am naturally skeptical about assuming that the labor movement and other political and non-church movements were nurtured more in this "American prophetic tradition" than they were in the establishment-driven American religious institutions themselves. I see the abolitionist movement growing as much (or more) from American and British religious traditions as it did from radical/ freethought religious traditions. I agree, of course, that the abolitionist movement birthed several other movements (women's movements, religious movements, labor movements, etc). I admire McKanan's work in reclaiming this reformist movement culture of the nineteenth century as "religious"-- in the sense of political/religious faith and recognizing that this set of beliefs was not really a mainstream religion, but it was truly a uniting faith. This is a very important intervention. It is also important to note the prophetic/religious connections between the abolitionist movement and the next generation's socialists.

Moreover, I agree that we find again in the late nineteenth and early twentieth century a network of quasi-religious reform movements which was similar to those of nineteenth century reformers. The Progressive Era indeed only saw tangible reform because of the broadly-held, prophetic hope in reconstructing or rebuilding the nation on some vague terms of a "Cooperative Commonwealth." I agree that this tradition, too, needs to be seen as a political faith of a sort--a somewhat coherent vision of American perfection and progress.

In many respects, this is all McKanan asks of us--to recognize that we can find institutionalized faith in this country within the archives of American radicals and reformers. But, I keep tripping over this suggestion that there is such a thing as an American Radical Tradition which continually nurtures new leaders and members.

What I see in the history of the American Left is a vast array of short-lived organizations, most of which collapsed through internal arguments or the successful passage of legislation. New organizations build upon some of the ideas of their forebears, but rarely do they really share the same vision or strategy for changing the world as that of the groups they most directly knew before them. My gut tells me that this is too incoherent to be "a" kind of religious tradition in any traceable sense. But, the more I chew on this, perhaps this is really not that different from mainstream American religious traditions. Perhaps there is as much an American Radical Tradition as there is a History of the Black Church, a History of American Evangelicalism, or a History of the Roman Catholic Church in America. I'm not sure yet, but this is a deeply interesting line of inquiry.

The book is sure to start discussions among scholars and students alike about the meaning of "religious history."
Email Post
Labels: janine's posts new books religion and labor religion and radicalism

Luke Harlow said…
Great post, Janine. I agree with your speculative questions about the book. But not having read it, I wonder if part of the issue for McKanan lies in the age-old question in American political/cultural history of trying to figure out just what the "left" is. Many would certainly consider the more institutionally-bound (or institutionally-birthed) movements you mention toward the end of your post part of the Left, even if they may not be radical.

In short, to your opening framing questions: are "radical" and "left" the same thing--especially since, as McKanan acknowledges in the bit you quote, that many actors themselves were uncomfortable with the label?
July 10, 2013 at 10:37 PM

Mark T. Edwards said…
Thanks so much for these questions and introduction to the book, Janine! Your discomfort with the idea of an "American Radical Tradition" reminded me of Trevor's most recent post on finding versus overstressing continuity in historical inquiry. To what extent does McKanan's work serve to "invent" a sense of coherence and conversation over time--not at all unlike what Russell Kirk tried to do in The Conservative Mind?
July 11, 2013 at 10:44 AM