Three weeks ago, I attended “The American Revolution Reborn: New Perspectives for the 21st Century,” a conference sponsored by the McNeil Center for Early American Studies. Intended to “identify new directions and new trends in scholarship on the American Revolution,” it featured four panels of pre-circulated papers, prepared comments to each paper by several experts in the field, and a Q&A with audience members. Each panel was centered on one of four unifying themes: “Global Perspectives, Power, Violence, and Civil War.” In his concluding comments at the conference’s end, Michael Zuckerman noted that the original CFP solicited papers on “Religion and Revolution,” but only two papers fitting that theme were submitted, and the organizers quickly scrapped the planned panel on religion and interchanged it for one on global perspectives.

Building on several smart monographs (Dee Andrews’s The Methodists and Revolutionary America is a personal favorite) and insightful articles (Harry Stout’s 1977 WMQ piece on religion, communication networks, and the ideological origins of the Revolution comes to mind) published over the years, scholars today are working toward understanding the reciprocal relationship between religion and revolution in the eighteenth century. Thomas Kidd’s Religion and the American Revolution (OUP, 2010) is perhaps the most notable contribution to date. RiAH blogger John Fea is busily at work on a project examining the Revolution in the Mid-Atlantic colonies as a Presbyterian rebellion and Kate Carté Engel (whose paper was one of the two on religion at the MCEAS conference) is doing fascinating work on the Revolution’s impact on transatlantic Protestant networks. 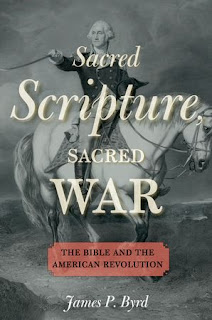 To their work and work-in-progress, we can now add James Byrd’s Sacred Scripture, Sacred War, released earlier this month by Oxford University Press. Byrd’s book, subtitled “The Bible and the American Revolution,” analyzes the context and content of “over 17,000 biblical citations in over 500 sources” in an attempt to understand what role the Bible played in motivating colonists to war and inspiring soldiers to fight. In a biblically literate society like British North America, orthodox Christians and avowed skeptics alike cited scripture in promoting and defending the Revolution.

But the Revolutionary War also altered how Americans read and understood the Bible, challenging and changing interpretations of both the Old and New Testaments. Byrd mines his dataset of wartime sermons during the long eighteenth-century to great effect, demonstrating the interpretive challenges colonists faced in rebelling against the British Empire. Whereas the Bible had previously been marshaled to justify war against Catholic imperial rivals France and Spain and non-Christian American Indians (as recently as the French and Indian War of the 1750s and 60s), the predominantly Protestant colonists of North America were now facing off against the British Crown they’d previously held up as the standard and protector of the English-speaking Protestant Empire. Individual chapters focus on prominent biblical passages and themes and the ways in which the colonists skillfully employed them. Some of these are predictable—the American Israelites sought freedom from the oppressive bondage of a wicked Pharaoh (chapter 2); Peter and Paul became preachers of “apostolic patriotism” (chapter 5); and the Revolution and the book of Revelation combined to usher in a new age of American millennialism (chapter 6). Others are perhaps less so—the “prophetic violence” of Deborah and Jeremiah “pushed the limits of just war theory and gave patriots biblical license to endorse the atrocities of war” (chapter 3). Chapter 4’s consideration of “David’s revolutionary heroism” typifies the complexities of biblical interpretation during wartime. For American patriots, David simultaneously served a multitude of roles. His youthful courage personified the patriotic cause (wielding his sling and stone against the British Goliath) and in his Psalms could be found inspiration for wartime violence, “uniting military heroism and spiritual devotion.” He also came to typify the dangers of royal authority, as revolutionaries like Thomas Paine linked his spiritual and moral corruption to his monarchical abuses.

Byrd’s careful reading of these several points—and, when appropriate, the ways in which British Protestants, American Loyalists, and enslaved and free people of color challenged them—adds immeasurably to our understanding of the Bible’s function during wartime and the ways in which American patriots understood the Revolution. It also puts religion at the center of the American Revolution—not as an ideological cause leading up to war, but rather as an intellectual and motivational force during the conflict.
Email Post
Labels: bible Christopher's posts religion and the american revolution reviews