Skip to main content
Labels
Posted by Paul Harvey May 26, 2013

Yeezus Christ Superstar: or, The Passion of Kanye West

Today's guest post comes from Paul Putz, a graduate student at Baylor University who blogs here; this is a crosspost from his blog.

I read Edward Blum and Paul Harvey's fascinating The Color of Christ: The Son of God and the Saga of Race in America last year, and ever since, I've been thinking about the place that our images and perceptions of Christ have within American pop culture. So when Kanye West announced that his new album would be titled "Yeezus" it immediately caught my attention...not because it was a surprising title, but rather because it fits in so seamlessly with the regular appropriation of Jesus' name within rap culture. 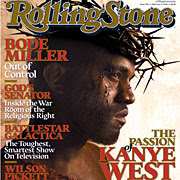 Rap music is no monolith. As with most forms of artistic musical expression, there are a variety of methods, tones, and attitudes embodied within the genre. Yet, at the level of pop culture at least, rap music is defined particularly by attitudes of defiance and megalomania.  There's "Fight the Power" and "F*ck the Police" and "Wu-Tang Clan Ain't Nothin to F*ck With," to name just a few definitive rebellious standards in the field. Then there's the endless bragging...indeed, an essential element of being an MC is claiming to be superior over and against all others. And words are the only weapons allowed in the combat (Tupac/Biggie notwithstanding).

Thus, on one level, when rappers claim (subtly or otherwise) the mantle of musical divinity, they are simply making their case for the coveted title of "best rapper alive" by utilizing the most powerful symbolic words available in the lexicon. What could be more commanding than claiming to be God? None embody this tactic quite like Jay-Z does. At some point in his career, he was given the nickname "Jay-Hova" (if you're slow, that's a play on Jehova). Jay ran with it from there, peppering a number of his songs with claims to rap divinity. "God MC, me, Jay-hova" he raps on "Takeover." Even that line pales in comparison to "Izzo (H.O.V.A.)," in which the entire chorus incorporates a sing-song chant spelling out Jay-Z's god-like status... "H to the izz-O, V to the izz-A" (interestingly, the chorus was a response to his old rival Nas, who had rapped a line calling Jay-Z an "h to the omo").

It's not that difficult to see why rappers would claim to be the God of the microphone. As Kanye West said back in 2006 when he infamously posed on the cover of Rolling Stone as Jesus, "You want me to be great, but don't ever want me to say I'm great?" A war of words, which is the essence of the fierce competitive nature of rap, will always lead to an arms race for ever-more-powerful words. It's like the old childhood game of trying to one-up your sibling's claims to statistical greatness, a game which inevitably resulted in dropping the infinity bomb:

But there's another element to the claims of divinity within the rap world that are specific to the imagery of Jesus. Take, for example, this provocative video from Nas and (as he was then known) Puff Daddy for their song "Hate Me Now." The beginning of the video features Nas in 1st-century Roman garb and a wooden cross on his shoulder walking through an angry crowd. Then, at the 3:50 mark in the video, Nas raps his lines while nailed and bloody on a cross.

Nas is not alone in claiming the crucifixion of Jesus as his own experience. More recently, The Game raps on "My Life" that he's "been hated on so much the Passion of Christ needs a sequel." Almost always for the world's biggest rappers, the vaguely-defined experience of being "hated on" has precedent in the death of Jesus on a cross. From Nas to Kanye to the Game, the best way to understand and articulate how the haters could possibly criticize their rap greatness (after all, they ARE rap divinity), is to find comfort in the precedent set when God himself was sent to the cross (presumably by haters).

In the imagery-rich world of words that is rap music, such appropriation is no surprise. Of course, that probably won't make some Christians any more comfortable with those rhetorical flourishes. And the fact that most rappers are black and are taking on a character role which (as Blum and Harvey show in their book) has become associated with whiteness no doubt adds to the discomfort of some.

But it could be worse. Rap groups could be creating short animated videos in which a symbolic blade decapitates the head from a white Jesus icon, and then takes the spirit from the decapitated Jesus and uses it to create the twelve members of the Wu-Tang Clan.

Oh wait, I guess that has already happened.

*As a postcript here, I can't help but share my favorite example of rap heresy. It comes, once again, from Nas in his touching homage to his mother titled "Dance."  At about the 1:50 mark in the song, Nas raps about his mother's entrance into heaven with the observation that "Jesus finally got his bride, mommy dance with him."  Where's a denunciatory tweet from John Piper when you need one?
Email Post
Labels: african american religion guest posts music rap religion and music religion and popular culture