Skip to main content
Labels
Posted by Unknown May 01, 2013

Jacob Dorman on the Rise of Black Israelite Religions

I'm delighted to introduce our new regular contributor Lincoln Mullen. He is a graduate student in the history department at Brandeis University. He is working on a dissertation about people who converted between religions—Judaism, Catholicism, Mormonism, Protestantism, native American, and Free Thought/skepticism—in the nineteenth-century United States. As part of his work on the dissertation, he is one of the creators of the American Converts Database. —PH 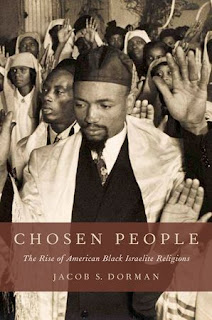 When I was in high school, I occasionally drove my grandfather, a Baptist minister, to preach at other churches. Several times we visited a predominantly black Baptist congregation in Providence, Rhode Island. What surprised me most during the first visit were the decorations: where you might have expected a cross, a picture of Jesus, and a communion table, there was a Star of David and a menorah instead. The pastor told me after the service that the congregation rented the building on Sundays from another congregation that met on Saturdays because they were black Jews. The idea of black Jews challenged to my ill-informed adolescent categories. But even at that time Jacob Dorman was already doing the research for the book that would set me straight, Chosen People: The Rise of American Black Israelite Religions (Oxford, 2013).

The first thing Dorman explains in his book is that the book is about "Black Israelites," that is, black leaders and groups who believed that the ancient Israelites were black and that modern blacks are their descendants. Some of these groups practiced Judaism, but many were Christians. Dorman argues that these late nineteenth- and early twentieth-century groups got their start not because African Americans were descended from the ancient Israelites, or because they had contact with white Jews in the United States, but because they read the Scriptures and tried to emulate the ancient Israelites in order to be more like the earliest Christians. Many of these groups, such as Prophet William Saunders Crowdy's Church of God and Saints in Christ, borrowed ideas and practices from Holiness Christianity, and thus share ancestry with Pentecostal Christianity. The book deals primarily with the late nineteenth and early twentieth centuries, especially in Harlem, but it extends as far as South Africa and Ethiopia to follow people such as Rabbi Arnold Josiah Ford, who moved to Ethiopia and, among other things, played music in the court of Emperor Haile Selassie. The emperor was born Ras Tafari Makonnen, and the belief that he is divine animates the Rastafarians, who also figure in Dorman's work.

I thought the best chapter was the last, in which Dorman offers a micro-historical reading of the life and religious practices of Rabbi Wentworth A. Matthew. Though Matthew claimed to have been born in Nigeria, he was really born in St. Kitts in 1892. Matthew became a Christian minister, and in 1919 he founded The Commandment Keepers Church of the Living God, the Pillar and Ground of the Truth. The congregation's practices were mostly drawn from the Holiness movement, including Baptism in the Holy Ghost. By the 1930s, Matthew had replaced Christian symbols and doctrine with Jewish practices, taken the title "rabbi," and added "cabalistic science" to his conjuring. In a close reading of Matthew's "hidden transcripts," such as the symbolism of amulets in his papers and items in his office, Dorman argues that "Black Jews did not simply imitate white Jews, but rather they were bricoleurs who constructed a polycultural religion that creatively reworked threads from religious faiths, secret societies, and magical grimoires [textbooks]."

Though Dorman is arguing that black Israelites owed their rise to the religious invention and combination of blacks, rather than to contacts with white Jews, that claim is hard to evaluate given that he spends little times discussing the ways in which blacks interacted with Jews. At several moments in the book, we learn that white Jews were worshiping with black congregations, that white rabbis assisted or taught black rabbis, and that black congregations used Jewish prayer books. Most of the book is about groups who did not regard themselves as converts, with the exception of a brief discussion of slaves in the eighteenth-century West Indies and antebellum South, but Lauren Winner has shown that some slaves of Southern Jews were considered Jews either by their choice or their master's. There are also occasional examples of blacks who converted to Judaism throughout the nineteenth and twentieth centuries. I mention these pieces of evidence to suggest that there is still room for a fuller picture the context of the rise of black Israelites and their interactions with Jews.