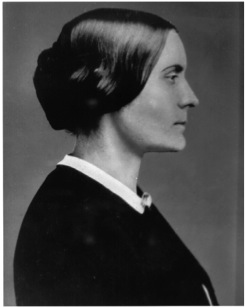 A few weeks ago, I had the pleasure of speaking at the Susan B. Anthony House in Rochester, New York. I highly recommend a visit to this fabulous site, which places the history of Anthony and the suffrage movement in its vibrant regional context. The topic of my talk was Lucretia Mott (of course), but I got into a fascinating discussion about the women’s rights movement and “the church” with the Executive Director Deborah Hughes, a former religious studies major and minister, and Director of Programs Annie Callanan. Why did some nineteenth-century feminists (especially Elizabeth Cady Stanton and Matilda Joslyn Gage) see organized religion as a primary obstacle to women’s rights, while others, like Susan B. Anthony, were willing to partner with evangelical women? Callanan suggested that as a birthright Quaker, Anthony had a much different perspective on the nature of spiritual authority. Susan B. Anthony had no need to rebel against the church, hers or any other.


Kern points out Anthony’s “remarkable ability to work with women of different faiths.” She explains, “For Anthony, her Quaker faith proved to be more malleable. It was possible, essential even, to embody the faith within and to carry it onward, despite the corruption of institutional religion.” In addition, Kern describes Anthony’s religious devotion to women’s rights: “Once committed to woman’s cause, she became its chief missionary. Charismatic if not messianic, Anthony converted a dedicated corps of disciples to her faith. In her own words, the bonds of love and friendship among her suffrage colleagues constituted ‘a Mother Church with her arms wide open to those who want to come in.’” This volume also features an introduction by Nancy Hewitt, and essays by Ann Gordon, Alison Parker, Lisa Tetrault, and others. Anthony’s activist faith was made possible by previous generations of Quakers. For example, members of her parent’s generation, like Lucretia Mott, had participated in two schisms in the Society of Friends over the role of the individual conscience in the fight against slavery. Two new books look at Quakers’ earlier struggles with social justice:

From Peace to Freedom investigates in detail the origins of antislavery thought and rhetoric within the Society of Friends. It shows how the Quakers turned against slavery in the first half of the eighteenth century and became the first organization to take a stand against the slave trade. Centering on Quaker communities in London, Barbados, and Philadelphia, From Peace to Freedom examines the writings and lives of antislavery Friends such as George Fox, John Hepburn, Benjamin Lay, John Woolman, and Anthony Benezet. It shows that while progression toward an antislavery stance was ongoing, it was slow and uneven and that it was vigorous internal debate and discussion that ultimately led to a call for abolition.

Geoffrey Plank, John Woolman’s Path to the Peaceable Kingdom: A Quaker in the British Empire  (University of Pennsylvania Press):

John Woolman’s Path to the Peaceable Kingdom shows that Woolman and his neighbors were far more engaged with the problems of inequality, trade, and warfare than anyone would know just from reading the Quaker's own writings. Although he is famous as an abolitionist, the end of slavery was only part of Woolman's project. Refusing to believe that the pursuit of self-interest could safely guide economic life, Woolman aimed for a miraculous global transformation: a universal disavowal of greed.

In 2010, Carey and Plank organized a rich and varied conference on Quakers and Slavery, 1657-1865, sponsored by Swarthmore, Haverford, and Bryn Mawr Colleges, and the McNeil Center for Early American Studies (Full disclosure: I participated in the conference, and I’ll be reviewing Carey’s book for The Historian). The conference program is available here, and it will give a taste of the forthcoming volume to be published by the University of Illinois Press later this year.