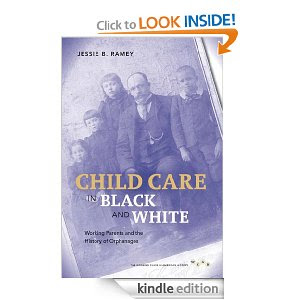 When Jessie Ramey's book, Childcare in Black and White: Working Parents and the History of Orphanages came out this year, it was much anticipated. The book won the Herbert Gutman Prize from the Labor and Working Class History Association, the Lerner-Scott Prize in Women's History from the OAH, and the John Heinz Award from the National Academy of Social Insurance.

The book has been widely praised as a pathbreaking study in the history of social class, race, and child welfare. The book shows not only how child care has been a pivotal resource for working families in times of crisis. But, it shows how racial segregation (especially the racial divisions among orphanages) has added to and exacerbated social divisions among families.

Ramey focuses on two orphanages run by "church people" in Pittsburgh. One was the all-white United Presbyterian Orphan's Home, and the other an all-black Home for Colored Children. Working families, Ramey found, widely used orphanages "interchangeably with day nurseries." In fact, they were much more trusted by working people for childcare, and many families retained a large degree of custody over children placed within them. But, the orphanages regarded families' capability of caring for children differently depending on parents' racial and ethnic background. I cannot wait to finish the book and talk more about it later.

One thing I wanted to mention now, however, is the extent to which this history of orphanages is as much a history of working class women and families as it is a history of the middle and upper class white Anglo Protestants who built and maintained these "helping" institutions. As we revise our analysis and periodization of the origins of our social welfare system, we need to also revise our understanding of the Social Gospel movement. Ramey's book is not explicitly about the Social Gospel movement or the churches or the propriety of social relations in "Christian families," but it is also ALL about all of these things. Church records comprise a large portion of Ramey's evidence, and "Christian visions" of family welfare interlace this history. I hope this book goes on to win the same kind of attention in religious history circles as it is everywhere else!
Email Post
Labels: books janine's posts religion and social policy religion and social reform social gospel

For the benefit of those who came in late, and I believe I can reasonably speak for them:

I don't quite know what "childcare" means here, esp in the presence of The Orphanage. Last I heard of the orphanages was from Newt Gingrich, and that did not go very well atall.

I know who Herbert Gutman is.

His studies and scholarship argued that the Black Family made it through slavery and Jim Crow heroically well, in fact far better than it has survived the liberality of the post-1950s. [See the Moynihan Report.]

I know who Sen. John Heinz [R-PA] was, John Kerry's predecessor as Theresa Heinz-Kerry's trophy husband. Now he has an award in his name, backed by what used to be his money.

But what the hell does that have to do with any of this? Screw the adults. What of the children?

Sorry. So who shall write the history of it? Who should pay to have its history written, or to read it?

JGD, I'm all for the history of what has worked, and what has contributed to "progress" and the world as we know it. And we Americans were sentimental about Tracy Stallard, who gave up Roger Maris' 61st home run.

But few know who gave up Mark McGuire's 62nd, or Barry Bonds' 73rd. And today, there is no all-black Home for Colored Children. And Head Start is a well-intentioned fraud.

I'm all for history where there's something there to preserve and build upon. But not to wallow in it.

Janine Giordano Drake said…
Tom, have you read the book? Ramey answers you question of what "child care" means in this context. Many poor families used orphanages as ad hoc childcare/daycare---orphanages took care of children, but parents maintained a degree of custody. Let me know if you want to talk about the book if/when you have read it!

I'm not sure what you're talking about in regard to Head Start. Perhaps there are similarities with early twentieth century orphanages. After you read the book I"d love to discuss that further.

I'm not sure if anyone else has written a history of Head Start yet, but that is an important history to write! I know there are some oral histories/ primary sources on the subject in the _Women and Social Movements_ database. I've used them in teaching, and they're very thought- provoking.

Tom Van Dyke said…
Tom, have you read the book? Ramey answers you question of what "child care" means in this context. Many poor families used orphanages as ad hoc childcare/daycare---orphanages took care of children, but parents maintained a degree of custody. Let me know if you want to talk about the book if/when you have read it!

And I'll look forward to your own further thoughts after you've finished it, Janine, thx. I always wonder exactly how widespread certain practices are, for example using orphanages as day care. If the book says so, I hope you'll pass that necessary perspective. At this point we have only two orphanages mentioned, as you know too small a sample for any legitimate social study.

In the meantime, Janine, I apologize for my intemperateness here. I do get uppity in the presence of anecdote as history or as "analysis and periodization of the origins of our social welfare system." My example of head Start was to that effect, a program we want with all our hearts to work, but apparently doesn't.

If someone were to write its history, especially as ""analysis and periodization of the origins of our social welfare system," it would be as yet another example of sentimentality over science.
March 10, 2013 at 4:37 PM

childcarehistorian said…
There are numerous histories of both child care (less than 24 hour care as distinguished from orphanages) and Head Start. For Head Start history, see " Head Start: The Inside Story of America's Most Successful Educational Experiment," by Edward Zigler and Susan Muenchow and "The Hidden History of Head Start," by Edward Zigler and Sally J. Styfco. If you want references to child care histories, let me know.
March 10, 2013 at 9:45 PM