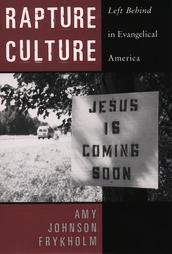 This semester, I am (again) teaching my course, The Apocalypse in American Culture, in which we interrogate the proliferation of apocalypticisms within religious movements as well as in popular culture. My goal is to help students understand what kind of work millennialism does for various people and groups as well as to understand how the apocalyptic mode of interpretation functions. The course surveys doomsday prophets, Ufology and aliens, conspiracy theorists, white supremacists, punk music, zombies, Jonestown, Marian apparitions, and Left Behind. The course is one of my favorites because I rely on the apocalypse as a mechanism to analyze the ubiquity of the end in religious culture and popular culture. Why the end? Why now (or then)? Why are these ends often catastrophic? This class proves to be particularly poignant after the "Mayan apocalypse" supposedly failed. The course addresses several main questions: Why is the apocalypse, the end, so enduring in the American fascination? What does this longing for the end of the world tell us about American culture more generally? What are the consequences of these perpetual yearnings for the end? What does it mean if the apocalyptic is an American mode of engagement, an interpretative schema, of our world in both the past and the present?

The first unit engages Amy Johnson Frykholm's excellent Rapture Culture: Left Behind in Evangelical America, an ethnography of the readers of popular Left Behind Series by Tim LaHaye and Jerry Jenkins. Frykholm documents the many ways that readers approach the series: how they agree or disagree, how they apply the books to their lives, and how they interpret contemporary events. One of the strengths of the book is that it does not give into the common assumption that readers acquiesce wholeheartedly to this particular form of the end and its political ideology. Frykholm demonstrates how readers contradict, complain, and contest how the books portray the premillennial dispensational view of the end.


My students found the dynamic between ethnographer and conversants to be most intriguing as Frykholm makes clear that she and readers disagree about how to interpret the books. For instance, one of the assigned chapters for the week examined gender in Left Behind, which Frykholm notes interests her but proved not as essential to how readers approached the books. The ethnographer noted the negative portrayal of women while readers suggested that the books were not about gender but faith and witness. This opened up a good discussion of how scholars and adherents might disagree about the interpretation of what really matters, and that this disagreement proves analytically fruitful. To add to our discussion, I also brought in Left Behind: The Movie, which visualizes the gender stereotypes of the books quite effectively. This book proves thought-provoking and useful for students, and I highly recommend this book to anyone interested in how evangelicals understand these popular novels. It proves good fodder for discussion of the place of apocalypticism in the lives of believers in an empathetic yet critical fashion.
Email Post
Labels: apocalypticism books millennialism rapture teaching

Mark T. Edwards said…
Thanks for this recommendation, Kelly! Rapture Culture sounds like an ideal book for my religion and politics course (I was pretty unhappy with the one I used before; can't even remember the name).

Playing the Left Behind: Tribulation Force video game in class can also be revelatory, although I depended heavily on my students to teach me how to "save" someone from the evil guitar players who apparently will roam the streets during the end times.
February 7, 2013 at 5:30 AM

Michael J. Altman said…
Mark's mention of the game piqued my curiosity so I hit the googles. Interesting stuff. I'd be curious to play it, though I can't see paying the twenty bucks for it. Here's a trailer for anyone else interested.

esclark said…
Rapture Culture is such a fascinating book. I'm happy to hear that it works well in an undergrad classroom, though I can't say I'm surprised.
February 7, 2013 at 7:59 AM

I got my copy for 3 bucks using department funds. I guess I'll be left behind for saying this, but I couldn't imagine using any of my own money for it. My students who were big into role-playing games said it didn't really compare to its intended "secular" competitors, even in the freestyle mode when you get to go around and actually shoot at "Global Community" (i. e., the bad guys).
February 7, 2013 at 8:34 AM

Kelly J. Baker said…
Mark and Mike, I mentioned the video game in class on Monday, and my students were shocked by its existence. Though in previous semesters, I have had students who mentioned playing the video games alongside reading the books. Left Behind works well for class interest and discussion.
February 7, 2013 at 4:15 PM

Tom Van Dyke said…
I remember the first time I heard Hal Lindsey explain the difference between the pre-tribs and the post-tribs. Imagine my surprise to learn that there are different tribes of "tribs." Und so:

JASON
Brandon.. Just in case I die, there's something I have to know...

JASON
What does the Omega 13 do?

JASON
What do you mean?

BRANDON
It's been the subject of an extremely heated debate on the
internet for years. Many believe that is a matter collapser, a
bomb capable of destroying all matter in the universe in a chain
reaction lasting 13 seconds.

JASON
But you don't?

BRANDON
No, I am of the firm belief that in reality it is not a matter
killer, but a matter REARRANGER, converting all molecules to the
exact state they existed thirteen seconds previous to activation
thus effecting a thirteen second time jump to the past.

JASON
How did you come to that conclusion?

BRANDON
My cousin's boyfriend's sister went out with the screenwriter.
His favorite movie is the Omegaman. He's seen it 13 times...

KYLE
As you know I strenuously disagree with this theory, Brandon. if
all molecules were rearranged, then everyone would be back in
time 13 seconds rendering the device useless.

Suddenly a BLAST erupts next to Jason's head. He and Gwen turn
to see SARRIS' MEN shooting at them from across the room at the
entrance to the cavern...

I have learned to always consult the classics in these matters, in this case:
http://sfy.ru/?script=galaxy_quest
February 9, 2013 at 4:46 AM

L.D. Burnett said…
Kelly, do you have your syllabus/reading list posted online anywhere? I am interested in what you have them read on UFOlogy, and wonder what the historiography on that is.
February 9, 2013 at 2:09 PM

In 1995, in a 24-page booklet on 18th century pastor Morgan Edwards, evangelist John Bray claimed that Edwards taught a pretrib rapture in his 1788 book titled "Two Academical Exercises...."
Those echoing Bray include Thomas Ice who wrote "Morgan Edwards: Another Pre-Darby Rapturist." Edwards' 1788 work can be found on the internet.
In order to claim that Edwards held to pretrib, candidates for the I-can-find-pretrib-earlier-in-church-history-than-you-can medal - including Bray, Ice, LaHaye, Frank Marotta etc. - have intentionally covered up Edwards' "historicism," his belief that the tribulation had already been going on for hundreds of years. (How can anyone in the tribulation go back in time and look for a pretrib rapture?)
Here's proof of Edwards' historicism and its companion "day-year" theory which can view the 1260 tribulation "days" as "years."
On p. 14 Edwards described the Ottoman Empire (which was then already 400 years old) as the Rev. 13:11 "beast." On p. 20 he defined "Antichrist" as the already 1000-year-old "popery" and the "succession of persons" known as "Popes" - his other Rev. 13 "beast." He necessarily viewed Rev. 13's 1260-day period as 1260 literal years in order to provide enough time for his two "beasts."
On p. 19, while discussing "the ministry of the witnesses" of Rev. 11, he allotted "about 204 years" for their "years to perform" - years impossible to fit into a 3.5-year period!
What about Edwards' rapture? On pp. 21-23 he wrote about "the appearing of the son of man in the clouds, coming to raise the dead saints and change the living, and to catch them up to himself....The signs of Christ's appearing in the clouds will be extraordinary 'wars and rumors of wars, earthquakes and famines,' &. (Matth. xxiv. 6-8.)....The signs of his coming, in the heavens will be 'the trump of God [I Thess. 4:16], vapor and smoke, which will darken the sun and moon [Matt. 24:29],'...and also cause those meteors called 'falling stars'....
Right after his combined rapture/advent (!), Edwards said: "And therefore, now, Antichrist...will...counterfeit the preceding wonders in heaven...causing 'fire to come down from heaven'....And that godhead he will now assume, after killing the two witnesses....Now the great persecution of the Jews will begin...for time, times, and half a time...."
Thomas Ice's article on Edwards (see first par. above) quoted only the first 27 words in the above quotation, ending with "to himself." This sort of unethical revisionism is constantly employed by many pretrib defenders.
Not only had most of Edwards' historicist tribulation occurred before his combined rapture/advent, but his Antichrist kept raging for 3.5 years even after the Matt. 24 signs! No wonder his tutor advised him to correct his thesis!
To read Edwards' complete work, Google "[PDF] Two Academical Exercises...www.breadoflifebiblestudy.com."
For more info on Edwards, Google "McPherson Page" (click on a reproduction of "Cover-Ups"). Also Google "Deceiving and Being Deceived" by historian Dave MacPherson.
March 22, 2013 at 11:39 PM