Some New Lights for Old Souls

It will forever be the panel that got away. It had everything: water, schoolbooks, gangs of New York (oops, I mean landscapes of New York), and a shout out to Belinda Carlisle. I was so upset that I missed this panel that I tried to meet with each presenter so I could hear about their projects. What I encountered, I think, is a group of PhD students who are and will transform studies of religion in the nineteenth century. I interviewed two of them: Dana Logan of Indiana University and Caleb Maskell of Princeton to find out what they are up to and where they see their fields going. 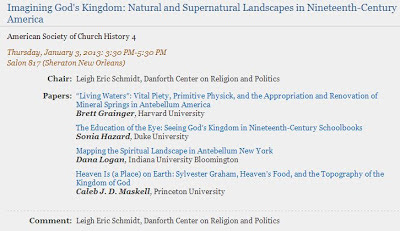 1) How, do you imagine, US religious historians are thinking differently or approaching the craft differently today than they may have 10-20 years ago?

Dana Logan:
I think there are US religious historians today who have more extensive training in theories and methods like anthropology, literary theory, and American studies who see how US religious history addresses disciplines further afield.This is great because it has made the field more sensitive to categories like colonialism, gendered identities, and the nature of consumerism. Here is what I feel like we have lost: really solid social historians who are proficient at counting and sorting through archives (that span a longer time), and who are willing to make big awesome claims about change over time and the role of religion in relationship to big issues like MODERNISM, CAPITALISM, and the NATION. To be fair, this was always more of a British tradition than an American one (think of the descendants of E.P. Thompson etc.). But I hope this kind of religious history will have a comeback. Even though, personally, I'd like to keep mulling about in cultural history.

Caleb Maskell
The diversity of approaches to the discipline of the religious history of the United States is remarkable. There is so much yet to learn so many new vistas to open up. And of course, both the questions asked and the way that questions are asked have everything to do with the kind of conclusions at which one will arrive. The recent Blum/Harvey book shows this in spades, as does John Modern's Secularism In Antebellum America, Tanya Luhrmann's When God Talks Back and Andrew Preston's Sword of the Spirit, Shield of Faith, to name just a couple. (By the way, isn't it interesting that two of the best studies in American religious history this year came from people who are professedly NOT scholars of religion or US religious history? What can we learn from that?!)
To be honest, I'm not sure about shifts in the "state of the field," but I can unpack some of my own historiographical instincts, in relation to broad movements that came before them.
In shaping my questions, I have been surprised by my hunger to get at the self-understanding of my subjects. I want to learn to see the world through their eyes. I want to understand their instincts. Who did they believe that they were? What did they believe that they were doing? What occupied their religious imaginations and how did that process of imagination contribute to the shaping of the social imaginary in which they lived? And even more than this who did they DESIRE to be? What did they INTEND? Often people's intentions are far more interesting than what they actually end up doing. That's where the magic and the movement tend to show up in historical lives, perhaps especially among religious people. And narrating the accreted sum of those intentions over time a genealogy of the imagination, if you like often shows unexpected anthropological and intellectual continuities, usually emergent around shared angst about a particular social/religious problem.
It may be that this focus on imagination and intention is characteristic of a recent shift in the discipline, at least among some scholars. In much contemporary work, I see far less desire on the part of historians to demythologize the characters. This is not, of course, the same as taking everything that subjects say about themselves at face value. Rather, the interpretative trick seems to be to write stories that resist the urge to collect characters as yet one more instance of this or that social theory. Instead, the goal is to frame them in such a way that the questions that haunted them are illuminated. This illumination is "historicizing," of course, but it is neither explanation nor reduction. Rather, the whole becomes MORE than the sum of the parts. In a way, the changing social imaginary becomes the protagonist the characters are irreducibly important and must be richly and thoroughly portrayed, but they don't get the last word.
2) What is the best piece of mentoring advice you have received thus far?

Dana Logan:
You can write your dissertation in a reasonable amount of time in 30 minutes a day, (with an additional hour for primary source research and an hour for secondary source reading).

Caleb Maskell
Interesting question. If "best" means what advice do I think about the most, then there are two contenders.
First, from Judith Weisenfeld: "Don't write everything you know." I'd bet that this is every young historian's struggle. When a historical subject becomes fully realized before your eyes when you just know that you "understand" someone suddenly they become so fascinating that you just can't shut up about them. This depth of knowledge can actually impede your writing. The trick is to get to the point where you know someone inside-out and then proceed beyond that point by figuring out how best to deploy that person's story in service of your own.
Second, from Eddie Glaude: "Write your dissertation like a book." The driving idea here is that the market for monographs is tough, and if your dissertation is going to be attractive, make it really interesting, jargon-free, and lively. This is no doubt harder than the other option, but the hope is that it will pay off in editing and publishing.
3) What is your project and how did you come to it?
Dana Logan: I am writing my dissertation about how new conceptions of public and private space in antebellum New York City shaped Protestant religion (and vice versa). Or in other words, how promenading down the street, gawking at Catholics in slums, living in boardings houses, making boarding houses for African American sailors, and experiencing the second blessing in the parlor of an apartment, all shaped Protestant understandings of sanctity, moral citizenship, and freedom of religion . I came to it through my deep love of "sacred space" studies, and my deep conviction that we can learn much more about how religion manifests spatially if we stop saying "sacred space."

Caleb Maskell
My dissertation project narrates the importance of talk about the Kingdom of God to the reshaping of American religious and political imagination between 1830 and 1877.
The basic narrative goes like this. Between 1830 and 1860, many social reformers and religious dissenters, disenchanted by the fading star of evangelical millennialism, began to use language of the Kingdom of God to talk about the future of American religion. In doing so, they were framing religious conceptions of American identity historically, in secular time. They concerned themselves with ethical questions about what a pluralized society built on God’s law would look like, over against triumphalist theological narratives about America’s eschatological significance. The paper that I gave in New Orleans about Sylvester Graham on the "Imagining God's Kingdom" panel suggests several of the themes I will attend to.
By the 1860s, talk about the Kingdom had moved into the mainstream. It captured the imagination of many self-consciously centrist American Protestants, providing the central metaphor for the post-war rearticulation of their dual mission to convert and to “civilize.” But this is far more than a Protestant story. In the period between 1830 and 1877, the Kingdom of God came to function as a pluralized normative language of the American secular among Catholics, Jews, "post-Protestants" and more. I have an article forthcoming in Religion and American Culture on a Reform rabbi named Gustav Gottheil who functions as a paradigmatic example of this. The burgeoning talk about the Kingdom enabled Americans of all faiths to articulate and contest religious visions of national identity in a common tongue.
While I have had a longstanding interest in the Kingdom of God as a way of narrating religious authority in culture, I came to this particular project when I was reading literature on the "Social Gospel" in the late 19th century. I was amazed at the way that the idea of the Kingdom of God seemed to function, in so many historical interpretations, as a proxy for "American optimism" or "utopian Progressive agenda." This default position was a kind of Niebuhrian dismissal of "Kingdom" talk as being enslaved to a "Christ of Culture" agenda. Very little thought was given, even by religious historians, to the work that the Kingdom was doing to structure American Protestant imagination, much less American religious imaginations more broadly. So, I started to read back in the sources, and discovered that there was a huge boom in talk about the Kingdom among disgruntled millennialists in the 1830s, and I was off to the races. Once the dissertation is done, I hope to extend the story through 1917. But for now, enough is enough.
Email Post
Labels: 19th Century

Monica L. Mercado said…
Thanks for posting this, Ed. I saw Dana Logan's great presentation at AAR, and was sad to miss this AHA panel--looking forward to the next meeting of the minds!
January 20, 2013 at 12:17 PM

Meredith said…
This is great. Thanks so much for sharing. Sounds like really exciting research that those of us in related fields will be happy to see!
January 22, 2013 at 11:19 AM