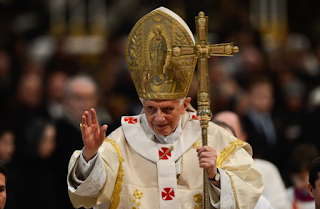 What do the pope and the Occupy movement have in common?  No, this is not the beginning of a stale 2011 joke; and yes, I am referring to the same Benedict XVI whose reproach of the Leadership Conference of Women Religious, and whose traditionalism on issues such as birth control and homosexuality, has alienated many progressives.  The fact is that Benedict has hewed to the traditional Catholic line on economic concerns as well, which is to say that, while he won't likely be mistaken for one of the "occupiers" any time soon, he has been persistently critical of global capitalism.


Consider what he had to say just last week in a message commemorating the World Day of Peace: "It is alarming to see hotbeds of tension and conflict caused by growing instances of inequality between rich and poor, by the prevalence of a selfish and individualistic mindset which also finds expression in an unregulated financial capitalism."  Straightforward critiques such as this one have been a staple of Benedict's papacy.  In his 2009 encyclical "Caritas in Vertitate" he lamented, "The world's wealth is growing in absolute terms, but inequalities are on the increase."  In that same document he rued the structural difficulties confronting organized labor around the world and went on to declare, "The repeated calls issued within the Church's social doctrine, beginning with Rerum Novarum, for the promotion of workers' associations that can defend their rights must therefore be honoured today even more than in the past."  When, two years later, the Vatican issued an appeal for economic reform that, among other things, denounced the "idolatry of the market," one leading Catholic intellectual mused that it would be "cheered by the folks occupying Wall Street."

The very suggestion raises a broader question about how the pope's wayward - by the Chicago School's standards, that is - economic teachings have been received on this side of the Atlantic.  We know that the US Conference of Catholic Bishops harbors similar beliefs, but when it comes to the laity things get a good bit more complicated.  In the aggregate, American Catholics still lean ever-so-slightly to the left, though if you look more closely at the data from the last four election cycles you'll note that a majority of white Catholics voted each time for the Republican.  Only thanks to a very significant boost from Latinos did Obama maintain the upper hand amongst Catholic voters in 2008 and 2012.  But then again, voting trends aren't a precise barometer of attitudes toward capitalism (especially when you throw in other controversial social issues).  Perhaps a better measure can be found in attitudes toward organized labor.  Here, again, there appears to be drift between the pope and his American flock.  While the Vatican has long championed workers' organizations, support for them is waning precipitously in a number of states with large Catholic constituencies, including Wisconsin and (most recently) Michigan. 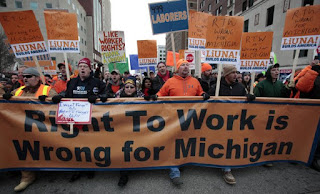 It's far too early to say whether the American laity's support for the regime of social teaching inaugurated by Rerum Novarum is, after all these years, faltering. But it's worth watching.  Developments on that front would have ramifications not only for Benedict and his Church, but also for the fate of American liberalism in the 21st century.
Email Post
Labels: catholicism Heath's posts religion and economics religion and politics

Tom Van Dyke said…
"When, two years later, the Vatican issued an appeal for economic reform that, among other things, denounced the "idolatry of the market," one leading Catholic intellectual [Fr. Thomas Reese, S.J.] mused that it would be 'cheered by the folks occupying Wall Street.'"

The best of the Italian Vaticanisti, Sandro Magister of L’espresso, linked Occupy Wall Street and “the Vatican at the Barricades” in the headline of his insta-commentary, a theme also harped upon by the deposed editor of [Catholic magazine] America, Fr. Thomas Reese, S.J.