The Mormon Ethic and the Spirit of Capitalism

More provocative stuff on contemporary Mormonism, politics, economics, and race keeps coming out. In "The Mormon Ethic and the Spirit of Capitalism," at The New Republic, the historian Jackson Lears explores the longue duree of the transition from 19th-century communitarianism to 20-century capitalist boosterism in Mormon culture. Along the way (and more interestingly to me), he also discusses recent works by our friends Matt Bowman, John Turner, and others (he refers to Turner's biography of Brigham Young as "authoritative," and has kind words for Bowman's survey of Mormon history as well as Terryl Givens's work People of Paradox. I would also point you to, and highly recommend, the latest essay from the vital young scholar Max Mueller, over at Religion and Politics, responding to Andrew Sullivan's piece on Mormonism and race and leaving us with some wise words on the subject.

And now today's guest post, which comes from Jennifer Polopolus-Meredith, a graduate student in American religious history from the University of Utah; she reflects on the architecture of Mormonism and capitalism in Salt Lake. 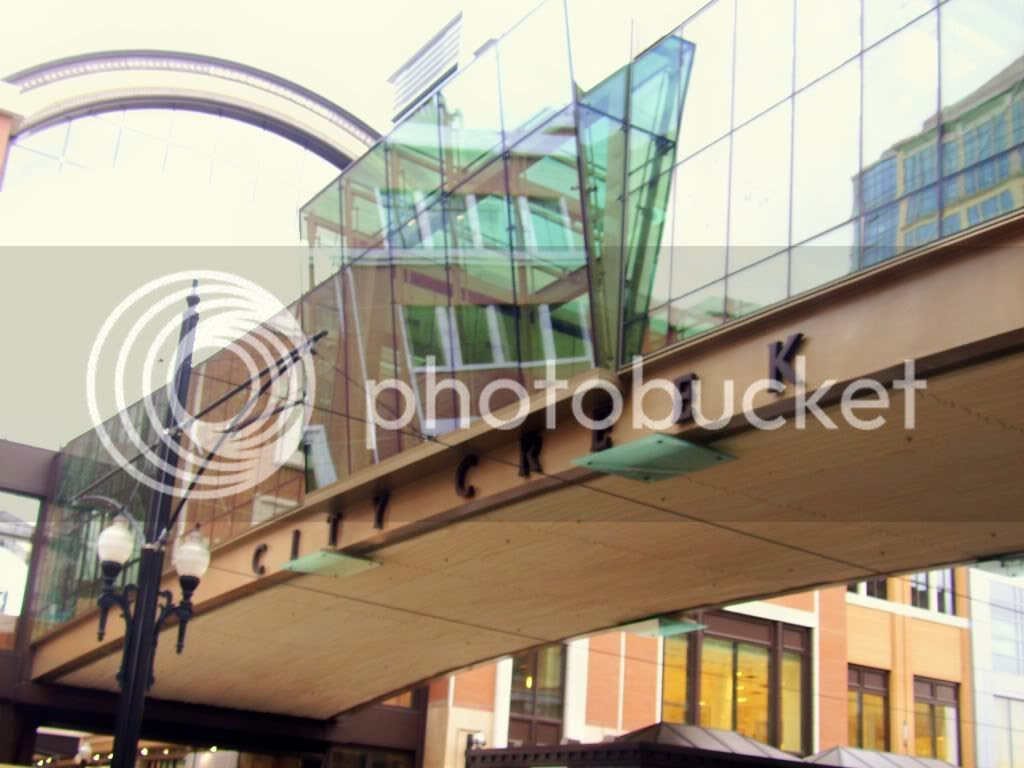 As I sat at the New City Creek Mall in downtown Salt Lake City I found myself gazing on the golden angel Moroni atop the Mormon Temple. As I sipped a chai tea latte from the patio of the Nordstrom’s caffe, I realized the temple was directly across from the mall. A friend and I had just been discussing Mitt Romney’s Presidential campaign and what it meant for Mormonism. Did his campaign symbolize an acceptance and blending of Mormonism into American society that the church has so long sought? As I looked at the temple, I wondered if the malls proximity to the temple was subtle part of the Mormon church’s campaign for acceptance.
The Mormon church has embraced the media with marketing on the web and radio with its “I am a Mormon Campaign.” The ads show Mormons who have diverse lifestyles from a single school teacher, to a man with tattoos who likes to ride motorcycles. The ads demonstrate a shift in Mormon marketing to portray the church as diverse, inclusive, and all American. They challenge the image of Mormons as only white, married, and uptight. They play in cities where anti Mormon sentiment is thought to flourish, such as towns with a strong evangelical presence. I first heard the ads in Colorado Springs, Colorado home of New Life Church. These are the not so subtle attempt of the Mormon church to change misconceptions. The location of the mall might be a more subtle connection.

With its location, City Creek Mall offers both shopping and salvation. These two might appear an odd coupling at first, especially with the economic downturn, but not if Mormons desire to blend into American society. Mormonism has long shaken off its communalist tendencies that marked its early days in Utah. In fact, the mall could be viewed as just another example of Mormon’s embracing capitalist American ideals. The church both created needed jobs and tax income for the city.Their reason for opening the mall is to revitalize down town Salt Lake city. What better way then to provide a high end shopping for both visitors and residents? The mall, coupled with the multimillion Conference Center (also owned by the church) will hopefully attract businesses to hold conferences in Salt Lake and bring in needed revenue. But why build the mall right across from the Mormon Temple?
When I finished my tea I decided to venture across the street and peruse the temple grounds. A short jaunt through a convenient cross walk leading directly from the mall to the temple, and I stood amidst the beautiful statues and flowers of the landscape. Many people strolled around, reading the placards of the statues and venturing in to the Tabernacle hall. Tourists snapped pictures and listened to helpful Mormon guides explain the history of their faith. That's when it hit me, what a perfect way to market their faith and normalcy in an unassuming manner. Would people, residents or business people from out of town, who came to the mall to shop or eat realize the temple was directly across the street. How many would follow their curiosity and cross the street, as I had done? Would they spend a couple of hours looking at the statues that explain some of the Mormon’s history and chat,with the very nice Mormon guides? After talking to the guides they might think, Mormon’s hmmm, they seem a lot like me, their not scary or weird. In fact, their really nice. Would those thoughts slowly change perceptions? The opportune location could encourage curious people to explore the temple grounds. Visitors who would never have sought out the temple might wander over because of the convenience and have a positive experience.
Shopping and Mormonism: not a bad combination to economically revitalize the city and demonstrate the link between American capitalism and your faith. A lot less artificial feeling than the “I am a Mormon” adds on the radio and internet. What is more American than capitalism and religion?  Maybe the location of the temple and the shopping center are just a happy coincidence with multiple benefits. Either way, they subtle convey the normalcy and assimilation of Mormonism in America.
Email Post
Labels: guest posts Mormonism Mormons religion and class religion and consumerism religion and economics

Christopher said…
Great post, Jennifer! The construction of the new mall, and your smart analysis of its meanings here, adds an interesting post-script of sorts to Armand Mauss's The Angel and the Beehive. Good stuff.
October 31, 2012 at 7:54 PM

Curtis J Evans said…
Thanks, Paul, for the postings. Jackson Lears' article is fascinating. I was really intrigued with his reflections on magic and money.
November 1, 2012 at 10:32 AM