Whig History and the Baptists

Just a little while back we posted Linford Fisher's review of John Barry's new biography of Roger Williams, one of the best reviews we've ever posted here IMHO. Fisher appreciated the narrative quality of Barry's book, while questioning some of the "Whig history" (my term, not Lin's) assumptions that went into the presentation of Williams in that book. It's in that spirit I guest post this contribution from Curtis Freeman, Research Professor of Theology at Duke University Divinity School. Freeman is an authority on early Baptist history, and in the below takes aim at some cherished assumptions that Baptist historians have brought to their work. I might add that many of us have contributed to a new volume which similarly complicates (we hope) Baptist history: Through a Glass Darkly: Contested Notions of Baptist Identity (University of Alabama Press), edited by Keith Harper. More on that volume soon.

Whig History and the Baptists
by Curtis Freeman

While attending a recent conference, I struck up a conversation with one of the participants, John Coffey, a leading historian of the Stuart period of English history in which the Baptists emerged. “So,” he asked, “Why is it that you Americans seem bent on seeing the history of the early English Baptists as so Whiggish?” Offering what I thought was a perfectly good explanation, I replied, “Because we’re Americans.” With a wry smile, he shot back a reply that dripped with irony: “True, but the early Baptists weren’t. When I got back home from the conference I immediately began reading Coffey’s book, Persecution and Toleration in Protestant England 1558-1689 (Longman, 2000).

It is a carefully researched and compellingly written account of the social and political world in which the early Baptists arose. Coffey frames his narrative with a critical assessment of the historiographical assumptions that previous historians have made in answering the question: How did England come to reverse its policy of state-sponsored persecution in favor of civil toleration? 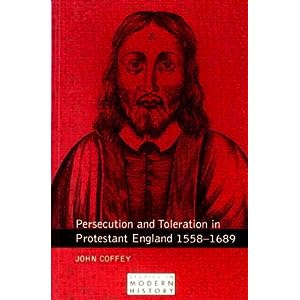 The first historians to provide a critical and comprehensive answer were whigs. The term “whig history” was coined by Herbert Butterfield in his book The Whig Interpretation of History (1931). It alludes to the English Whigs, who favored the power of Parliament, over against the Tories, who preferred the authority of the king. Whig historians narrated the history of Protestant England as a story of gradual toleration that eventually reached its climax in expressions of liberal democracy and constitutional republicanism.


Revisionist historians rightly argue that this approach oversimplifies events as a teleological narrative with a predetermined end. But just as problematic, is the fact that it transforms the voices of religious dissenters by turning them into secular liberals. Revisionists attempt to recapture the strangeness of early modern England by stressing the religious intolerance of the Established Church toward Catholics and radical Puritan sects. The revisionist critiques have debunked liberal myths, such as the stereotype of medieval Europe as a benighted and violent society, the notion of the Enlightenment as a purely benevolent and tolerant movement, and the caricature of John Locke as a lone intellectual who single-handedly rescued England from the theory and policy of state-sponsored persecution.

Coffey’s book seeks to temper the liberal optimism with a little revisionist realism. He tells the story of the persecution of Protestant dissenters along with Catholic martyrs creating a complicated narrative. He portrays the 1689 Act of Toleration as a genuine turning point in history, while at the same time not downplaying the reactions of religious intolerance. More significantly, he displays how competing religious intolerances eventually gave way to pluralism and democracy. But the story is neither as easy as the liberals assume nor as inconclusive as the revisionists assert. Coffey’s history of liberty is a muddled and complex story, yet a convincing one.


Moreover, Coffey reaches the conclusion that modern political toleration was not the product of secular liberals, but rather ironically was the result of dogmatic sectarians who, even under the state policy of persecution, refused to conform. The result was a robust pluralism of Baptists, Independents, Quakers, Levellers, Diggers, Ranters, Seekers, Familists, and Catholics that unflaggingly challenged the Established Church that preached religious uniformity and the civil powers that enforced it. This notion that liberty is the result of passionate “fundamentalism” may strike readers as counter-intuitive, but Coffey’s account is persuasive. For, as he demonstrates, without religious dogmatism, there would very little pluralism to tolerate.


Thus Coffey shows that religious liberty was not merely a “loser’s creed,” but became the public policy embraced as a political good. To be sure, he admits, many other factors converged, contributing to the eventual policy of civil liberty, among which were Renaissance humanism, Enlightenment rationalism, the discovery of the New World, the printing press and pamphleteering, urban growth, economic prosperity, and religious warfare.


But what is significant about Coffey’s book, and what is missing from previous studies, is the fact that the modern political order rests on a theological foundation, rather than an anthropological one. In doing so he reframes the central problem, borrowing a line from historian John Morrill, to ask how what began as a civil war of rival authoritarianisms became a revolution of religious liberty. And perhaps struggling with this problem will serve to challenge and complicate the simple assumptions we freedom-loving Americans often make about the place of the early Baptists in this larger story.