The Indian Great Awakening: Part 4 of 4

Here is the final part of our conversation with Linford Fisher, author of The Indian Great Awakening: Religion and the Shaping of Native Cultures in Early America. You can go here for the entire 4-part series in one easy reading series. Or, in separate parts: Part 1 is here, Part II here, and Part III here.

7. In the epilogue you talk about present-day Native communities and even interview several individuals. What kinds of relationships were you able to build in this process, and in what ways are these important to you as a historian? 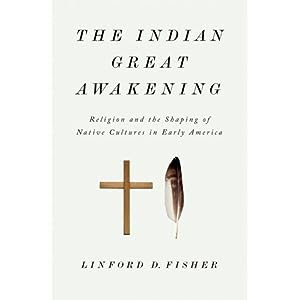 Although engagement with present-day Native groups was not necessarily expected or encouraged in my grad program, I increasingly realized there are two discourses out there, two very different visions of the past. On the one hand you have scholars from various disciplines who try to carefully and in an “objective” way reconstruct the past. On the other hand there is the world of Native communities, activists, and lay historians who see academics as perpetuating certain myths about the benevolence of their white ancestors or at least failing to tell American history in all of its sordid fullness. Native academics often span these two worlds, but too often historians work in the comfortable space of the archive. I wanted to make sure I had a few additional perspectives on the past as I was writing, so I intentionally took a few trips to Native reservations and was fortunate to be able to talk to a few people throughout the project who really helped me to think in a more nuanced way about the past and the issues I was trying to interpret. In the end, I can’t say the book is groundbreaking methodologically in that regard, but the process itself was important to me in various ways, and I think, too, the epilogue (if people actually make it that far!) will prompt the reader to consider the ways in which these things continue to play themselves out in the present. I’m really grateful for the connections I was able to build and look forward to continuing those friendships and conversations.

8. Who is your favorite/most interesting character in the book, and why is that person so interesting to you?

That’s a great question. One of the most exciting parts of this project was expanding the cast of eighteenth century Indians with whom historians are familiar. Every colonial historian knows about Samson Occom, the famed Mohegan Presbyterian minister who attended Eleazar Wheelock’s IndianSchool and served as a missionary to the Iroquois in New York. But there were hundreds, thousands of other Indians in this area, and my hope was to shed some light on their experiences as well. One of my questions was this: How representative was Occom? I remain convinced that his experiences were important but should not be used as a stand-in for all Native religious engagement. And even Occom (who does make several important appearances in my book) is not the obedient Indian convert, either, nor does he wholeheartedly embrace all aspects of Euro-American Christianity. That’s why one of my favorite persons in the book is Samuel Niles, an eighteenth century Narragansett Indian minister. Niles joined a missionary church in Westerly/Charlestown, RI, during the Great Awakening, but was quickly expelled from the church for exhorting the congregation during the service and perhaps in other ways contesting the authority of the missionary minister, Joseph Park. In response, Niles took a bunch of Narragansetts from Park’s congregation and started his own church. That Indian church met in a wigwam for a while before constructing their own building (during which time they also experienced an internal division).

But Niles is interesting because he was an ardent Christian Indian separatist and continually defended “his mode” of worship and preaching when challenged by white ministers and missionaries. And yet Niles was illiterate and couldn’t read the Bible. Instead, he received his inspiration from the Spirit directly, through visions and dreams. Niles is also complicated because he represents the majority faction on Narragansett lands who were at odds with a series of sachems who were selling the land from underneath the Narragansetts in order to pay their own person debts. But this tradition of an illiterate minister at the Narragansett Indian church continued on into the early nineteenth century, even after Niles passed away. When yet another white missionary showed up in 1809, the Narragansetts still don’t have a literate minister, they still defend their own 5-hour worship services (that involved a lot of individuals exhorting), and they still generally don’t want the involvement of white outsiders.

9. Same question, only your favorite/most interesting document in the book.

That’s a tough one. I came across so many petitions from Native individuals and communities, so many letters written by Natives themselves, and even church records that narrate stories and/or the words of Natives—way more than I expected going into this. A meticulously penned letter written entirely in Latin from the Tunxis schoolmaster John Mettawan in the 1730s is one such example. One that stands out, however, is a Native publication that I briefly analyze in the final chapter. It is a collection of hymns put together by the Narragansett Thomas Commuck in 1845, titled Indian Melodies. Commuck had been born on the Narragansett reservation in Rhode Island in 1805, attended the Indian school there sponsored by a missionary society, and in 1825 Commuck moved to Brothertown, New York, to join the intentional Christian Indian community there. In the early 1830s he moved with most of the Brothertown and Stockbridge Indians to Wisconsin. Commuck is mostly known for his account of the Brothertown Indians in 1855, but this hymnal is far more interesting in many ways. Indian Melodies is fascinating because the title of the hymns are related to Native Americans – either tribal names or the names of Native individuals, such as Pequot, Mohegan, Mohawk, Powhatan, Massasoit, Uncas, Sioux, Seminole, Huron, and so forth. And yet the content of the hymns themselves are unrelated to the titles—they are mostly garden variety Christian hymns of various origins. In this way Commuck was using the hymnal to retain and shape Native collective memory and history, since certainly many of the individuals and even tribes had little connection to Christianity (one hardly thinks King Philip, for example, or the Comanches, would have approved of Commuck naming Christian hymns after them).

One song stands out in particular, however. Titled “Old Indian Hymn,” it is the only hymn for which Commuck included an explanation. The Narragansetts apparently heard this tune in the air prior to the coming of Europeans and used to sing it in their own powwows and meetings. When the Pilgrims arrived in 1620, the Narragansetts were shocked to hear the Pilgrims singing this same tune in their own church meetings. According to Commuck, the tune had been preserved in the Narragansett community through the centuries, and Commuck wanted to ensure it would not be lost.

Anyway, among the reasons for which I find this hymnal fascinating is that it illustrates for me the way in which Natives put their education and Christianity to all different kinds of purposes that might have been slightly at odds with white Christians and missionaries (and even other Natives).

10. I'll ask you a question that I always ask students about books we discuss: two years from now, when everything else you read here has been forgotten, what is the one thing that you most want readers to take away and remember from your book? What is the "takeaway point" you want to stick with them?

“Conversions” are complicated. Religious change is always embedded in larger political, social, and cultural contexts and considerations. Native American religious engagement was incredibly varied, and was almost always done in ways familiar to Native cultural sensibilities, pursued with Native communities in mind, and—even when Christian practices were adopted—were lived out in ways that resonated with Native lifeways.
11. What are your next projects? What can we look forward to reading from you in the future?

I’m currently working on a book-length project on northern slavery during the colonial period. I’m most interested in the varieties of unfree labor among Indians and Africans in colonial New England, all with an eye toward the Atlantic world. Right now I’m working on an essay on New England Indians who were enslaved and shipped around the Atlantic world (which has meant dutiful research trips to Bermuda, Barbados, and London) during and after seventeenth century wars. I’m also toying around with a co-authored essay on the origins of evangelicalism, but it’s too early to say what will actually come of that.
Email Post
Labels: author interviews ethnohistory hymns lin's posts linford fisher music native american religion native americans new england religion in colonial America religious biography

Anonymous said…
Great interview. I read the book earlier this summer, and it is an impressive, thoughtful work. I really appreciated the interviews in the Epilogue as well. And given the discussions about evangelicalism on the blog earlier this summer, I look forward to your meditations on the topic. Keep up the good work.

linfordfisher said…
Thanks, Phil -- much appreciated. And thanks for the reminder to check back on prior convos re: evangelicalism on this blog, too. They have been rich, I agree. Cheers!
August 17, 2012 at 7:52 AM