Machiavellian Missouri Synod Minions in a Modern Morality Tale: The Changing Face of Conservatism in America

By definition, conservatives hate change.  Religious conservatives, one might say, double-down on the hatred by wrapping the fetish of a static point amidst the contingency of history in transcendent garments of one kind or another. The great virtue of James C. Burkee’s Power, Politics, and the Missouri Synod is to document how much, despite their rhetoric about preserving timeless truth, the conservatives at the core of the 1960s-70s schism in The Lutheran Church—Missouri Synod changed their denomination.  It remains to be seen how much they might have changed American culture and Christianity, as Burkee’s subtitle claims.  My own hypothesis is that this tempest-in-a-teapot will go down as a relatively minor and deservedly forgotten episode in the broader history of religious violence in American culture in the past half-century.  No blood was let, but there was plenty of violence dressed up in piety to go around.  So what else is new in America? 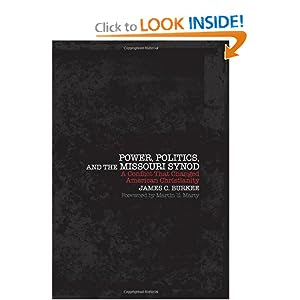 Burkee’s book, originally a Northwestern University dissertation, traces the history of the LCMS from 1938 to 1981.  Throughout, Burkee also has an eye on contemporary developments.  As he sees it, things have gotten worse.  “In 1972 membership in the Missouri Synod peaked at nearly 2.9 million members.  Since then the church has lost over five hundred thousand members.”(183)  Burkee attributes this loss to the contentious spirit of the Synod during the seventies.  “A once thriving church . . . had become an also-ran, struggling for existence and relevance even as it continued the fight to define itself.”(183)  As I have pointed out elsewhere, other causes for statistical decline within the Missouri Synod and other mainline Protestant denominations are more likely than theological bickering to explain things--notably immigration patterns and birth-rates—but those would not fit the morality-tale plot-line.


So, Burkee’s plot features “decline.”  He thus crafts, one might suppose, a tragedy—as Burkee himself suggests in a publisher’s interview.  More accurately, however, Burkee’s approach is through satire, in the classic sense of using irony and ridicule to expose and criticize the stupidity, cravenness, and folly of actors, especially in the political arena.  “Sunlight is the best disinfectant,” Burkee quotes Justice Louis D. Brandeis as the epigraph to the entire work (xiii).  This is a satire exposing the impurity of an ostensible purity program. 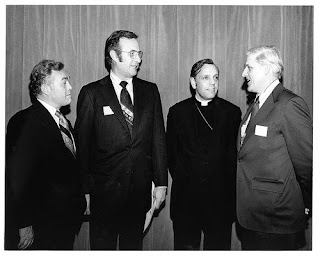 Burkee’s cast is a decidedly pale and shadowy bunch.  He focuses, with good reason, on the conservatives who organized (and re-organized repeatedly as their coalitions turned on each other) to take over the LCMS in the 1970s.  The most famous  among them is Jacob A. O. Preus II, the son of a Minnesota Governor who was elected President of the LCMS in 1969 and served in that office until 1981.  His younger brother, Robert—another Lutheran pastor and President of the Seminary at Springfield, IL (later Fort Wayne, IN) also appears prominently.  Both come across as less-than-forthright, double-dealing, if not downright despicable.  As if in ironic fulfillment of the biblical narrative about certain brothers, they couldn’t even get along, apparently, with each other.  But the chief character in this morality tale is Herman Otten, long-time editor of Christian News.  Otten, according to Burkee, was the “progenitor” of the conservative movement in Missouri, “the single most influential conservative in the synod before 1969,” and the Synod’s “great pitiable” and “most infamous figure.”(7-9)  I am persuaded by the evidence Burkee marshals—ranging across interviews, convention proceedings, and previously inaccessible archival holdings--that his judgment on this matter is accurate.  Herman Otten was the puppet-master pulling the strings of conservatives across the Missouri Synod.  Few acknowledged his influence.  Many vilified him in public.  But Burkee documents unmistakably how conservatives depended on Otten behind the scenes, and even more how he shaped the terms of the debate by changing the central theological issues at stake.

What Otten did was in effect to force change in the confessional theology of the Missouri Synod to make it conform with neo-conservative (McCarthy-and-John Birch inspired, solidly Republican, Reagan-right-wing culture-war) politics:  “The LCMS,” Burkee honestly recognizes, courtesy of Herman Otten “has . . . assumed a place in America’s emergent Religious Right.”(11)  It cannot be stressed how much of an innovation this was.  For most of its brief life-span, as I traced in Hopes and Dreams of All--my history of the LCMS youth auxiliary, Lutherans in the Missouri Synod held a range of political persuasions.  They were even willing to engage one another in civil debates about such penultimate matters (I track in particular the debates over “die frauen Frage”—decided in favor of women’s suffrage among the Leaguers twenty-years before general suffrage in the U.S., and the debates about the rise of the Third Reich in Germany—about which LCMS Lutherans were badly divided; Otten continues to contest the veracity of Holocaust accounting).  What Otten accomplished was to build a platform for conservatives by uniting politics and theology against “liberals” in a decidedly non-Lutheran (but typically American) fashion.  He thus overthrew centuries of what has been called “the two-kingdoms doctrine,” whereby Lutherans recognized God’s work of law in political life, on the one hand (justice and order depend on the best efforts of people to preserve peace—but all fail and fall under sin and death) and God’s work of grace in the life of the church, on the other (which saves, through faith in Christ, as mediated in Word and Sacrament).  Otten’s blend of theology and politics as an early “culture warrior” destroyed this careful doctrinal balancing act between law and gospel by conflating the two.  As if in karmic consequence of this doctrinal innovation, as Burkee’s satire makes abundantly clear, the larger movement that grew up in the orbit of Otten’s over-heated rhetoric destroyed lives, careers, and (perhaps) a denomination in the process.  By trying to “purify” an institution (and especially its Seminary—they are, after all, notorious places of rampant impurity), conservatives harmed, if not destroyed, it.  Purity, one might put it, is God’s prerogative.  Humans are too dangerous to be trusted with it—as the crucifixion of Jesus supposedly makes manifestly evident.

The central shibboleth in Otten’s assault—which began by targeting the Saint Louis Seminary faculty that had refused to approve him for ordination in 1958--was biblical “inerrancy.” Inerrancy arose as a doctrine in the late 19th and early 20th century as a reaction to historical criticism.  It claimed to be the “common sense” and “literal” interpretation of Scripture, but in fact was a severe truncation of the pluralistic medieval methods of hermeneutics (literal, allegorical, typological, etc.).  Inerrancy was, furthermore, clearly designed to “defend” Scripture using (ironically) a scientific-historical criterion of truth (of which medieval and early modern interpreters were, naturally, unaware).  This historical-scientific level of meaning became the default “literal,” meaning, which (of course) it isn’t (most of Scripture is, obviously, pre-scientific poetic or theological truth), but so it seemed to be—which then made it a very strong and convenient fetish on which to hang the “predictable” (Jacob Preus’ word) “liberals.”  A 20th century method of biblical interpretation (usually exercised in English, no less) became a political weapon, which in Otten’s discourse was wielded not only against historically-critical seminary professors, but also against advocates of civil rights, ecumenists, big government, the social gospel, feminists, and communists—“‘liberals’ all.”(59)

Burkee tracks nicely how various leaders in the conservative movement within Missouri jumped on and off the Christian News bandwagon at various times, and on various issues.  Burkee is not a theologically-sophisticated historian, so he is somewhat tone-deaf to just how strange and new this hybrid theological-political blending was among Lutherans in America (who ought to have learned a lesson about such blending in Germany).  About the election of Jacob Preus to the presidency of the LCMS in 1969, for instance, he writes:
Conservatives hoped for the theologian but got the politician.  In 1969, Preus took charge of a movement that seemed unified.  Humbly accepting nomination by his backers and election by delegates, he quickly distanced himself from the first by reaching out to the second.  That Preus was a master of duplicity is the one point on which nearly all those I interviewed (who were willing to talk) agreed.  He seized control of the church and built a decade-long career by constructing and fueling a fraudulent leadership dynamic in the church, consistently showing one face to the public and another to his cronies.  From the day of his election in 1969, Jack Preus openly and repeatedly condemned the men who elected and kept him in power [notably, Herman Otten], only to backtrack with them in private. . . .  He gave conservatives what they wanted—victory against the liberals.  When it was achieved, the tenuous coalition collapsed and turned on him while conservatives turned on each other.(10)
What Burkee struggles to recognize is how theologies are inevitably politically implicated, if not thereby defined.  They are words.  They bear meaning, which is why people find in them cultural power.  The interesting historical question is how theological words connect the power of religious symbols to other kinds of power—institutional, political, and cultural.  What Burkee’s work in the primary sources allows us to recognize is that the conservative movement in Missouri actually overthrew the long history of Lutheran recognition that politics is penultimate, under the accusation of law and the “left hand” of God.  All fall short.  All need mercy.  All bear the responsibility to be as ethically responsible as possible, following the highest (not the lowest—as evident in this episode) standards of integrity, rationality, and compassion.
So, Lutheran clarity about how the law always accuses ought to promote a degree of charity towards each other, and even (as one ethical teacher—and, no, that’s not all he was--once put it) the mandate and capacity to love one’s enemies.  There’s scarce little evidence of that in this history, featuring Missouri Synod “minions” (that’s Burkee’s word, not mine) evidencing the fascinating Machiavellian machinations of a minor episode in American religious history.  A similar history is well over-due for the liberal Lutheran side, which would also lend itself to satire—although elements of both tragedy and comedy would also fit the evidence.   But in any event the episode Burkee satirizes here may well have changed “American Christianity,” but I suspect it heightens instead a deep continuity.  Throughout American history, Christians have repeatedly tended (been tempted?) to engage religion on behalf of violence—understood not only as physical force, but also as systematic exclusion, as policies that scapegoat and vilify (through omission or commission), and as language that lies.  This temptation became acute in the post-WWII U.S. empire-building era of nuclear proliferation, assassinations, and military and civil conflict.  In that milieu, believers across both liberal and conservative camps took sides in becoming self-professed (if not self-righteous) “cultural warriors” for Jesus, blurring the paradoxical tradition of authentic Christian public witness in devotion to American civil religions of one stripe or another (see on that theme my most recent book, Empire of Sacrifice).  Whether, as Burkee clearly hopes, the disinfectant of historical sunlight and satire can also create any room for reconciliation—another key direction in the history of American religion over the past half-century—decidedly remains to be seen.  That would be a story, among Lutherans in America—and many other religious groups, worth remembering.
Email Post
Labels: church history denominational warfare lutheran pahl's posts religious conservatism reviews

Anonymous said…
Enjoyed the review. As a preacher's kid whose most vivid memories from that time include my parents' deep concerns over what would eventually result from the so-called "Battle for the Bible," I'm really not so surprised to see the Missouri Synod where it is now. Very incisive comment about the conservative groups re-organizing and then re-organizing again as they turned on each other.