The Fan Who Knew Too Much 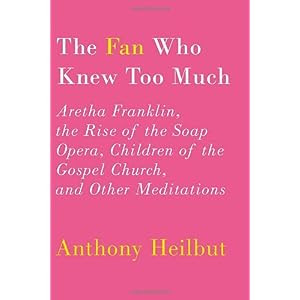 Douglas Harrison, author of the outstanding new text Then Sings My Soul: The Culture of Southern Gospel Music (fuller review/discussion to come here later), interviews the eminence grise of black gospel music writing, Anthony Heilbut, today in Religion Dispatches. Anyone who studies black gospel music will rely on Heilbut's long experience as a scholar, producer, and writer on the subject. And for white southern gospel, there's no better discussant presently than Douglas Harrison, whose blog on the subject you can follow here.

Harrison interviews Heilbut on Anthony's new book The Fan Who Knew Too Much: Aretha Franklin, the Rise of the Soap Opera, Children of the Gospel Church, and Other Meditations. There's much great stuff in the conversation, which addresses at length the long history of gay men in black gospel music, both as performers and fans. In one part of their conversation, they get a little bit into the erotics of the gospel and the body of Jesus, in a way Ed Blum and I cover a bit in The Color of Christ. A little excerpt, but most definitely read the rest here.

In my research for my book I ran across something that composer and critic Virgil Thomson wrote back in the ’20s or ’30s when he did this poor man’s psychoanalysis of a popular hymn book, and by his count, ninety-some of the hundred-odd tunes were, as he classified them, some kind of homoerotic meditation on love for a bleeding and beaten Jesus.
Fascinating, because of his work with Gertrude Stein and fascinating because in 1941 Thomson did a piece on Utah Smith, who is this guitarist whom the white blues boys just love. His big hit was “Give Me Two Wings to Veil My Face.” Of course Thomson was gay yet tolerating nothing, with all kind of southern bigotry toward blacks and Jews, etc., but he knew the score. And he went to Utah Smith’s church, and he observed how the people were responding and particularly how they would go up and dance in the aisles. And then he noted, as almost no one had before, when they finished dancing they went rather sheepishly back to their seats. He had a wonderful sense of the whole ceremony.
Shannon Williams [a white Pentecostal I write about in the book] had this theory that gay people are attracted to Jesus because Jesus was a hot man. Maybe. Jesus spoke as someone who suffered so much for you, a man in such torment for you, someone who is surrounded by his disciples. I never heard [the children] talk about Jesus and the beloved disciple. That’s more what I’ve heard from white queer theorists. But Jesus as my only friend, as someone who traveled this road before—I could certainly understand how that figure speaks to the oppressed, and particularly why not to gay people and lesbians?
Email Post
Labels: african american religion crossposts gospel music music prosperity gospel religion and race religion and sexuality religion and the body