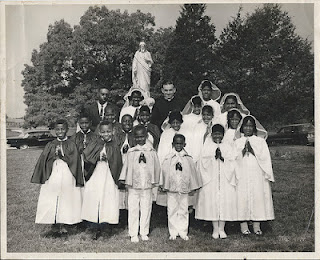 Time for me to go on a little blog-cation, while I celebrate my 29th birthday next weekend by falling even further into summer lassitude/dissipation/neurasthenia than usual. So glad that the odometer hasn't turned over to the dreaded 30-- level yet, and I still retain my youthful spring and vigor and my mind still works like a well-oiled machine. See you all a week from Monday or thereabouts.

First, though, we want to finish up our little mini-series on recent books on American Catholicism, and its relationship with Protestantism, in the colonial and antebellum eras. Just as a quick epilogue to that series, links to a couple of posts that address absolutely central issues of Catholic history, African American history, and women's history. (Incidentally, I know there are so many other fine recent works out there just out in American Catholic history, so if you want to post about one of your favorites, please let me know.)

First is Matthew Cressler's post "Beyond the Black Church: African American Religious Studies, the Next Generation," at the American Society of Church History blog -- a rare academic religious history blog post that had a few moments where it was trending on Twitter! The second is Amy Koelinger's "American Sisters Haven't Strayed. The Vatican Has," from Religion and Politics. More on both after the jump.
First, Matthew Cressler's post begins:

I study, among other subjects, black Catholics. When I tell people I study black Catholics, I am often met with blank stares. If black Catholics occupy any space in the American religious imagination, they conjure images of Catholic Masses with Gospel choirs and the politics of parishes like St. Sabina’s on the South Side of Chicago. Black Catholics sometimes baffle because they pose a problem for scholars and laypeople alike. African American religious studies, until relatively recently, may be one of the few instances in which popular imagination and scholarly interpretation align quite neatly. When African Americans and religion are invoked a specific image usually comes to mind, and black Catholics don’t quite fit.

Taking off from his own work, Matthew then goes on to look at some recent work that moves beyond the historic scholarly paradigm of "the black church," explaining that it is not enough to simply add in new characters, jettisoning the Black Church for a diversity of Muslims, Jews, and Christians. No, their work is revolutionary because it has transformed what we mean by 'religion' when we describe African American religions and narrate African American religious history. It is not that 'the Black Church is dead,' per se, but rather we’ve moved beyond it altogether.

This is an excellent post that will give ou a quick, readable, and insightful summary of some of the best recent thinking on the history of African American religions.

Amy Koehlinger, doubtless enjoying the coolness of her new post at Oregon State while the rest of us sweat away one of the hottest summers in history (not jealous, just saying), is an authority on the history of American Catholic women's religious orders, and the author of The New Nuns: Racial Justice and Religious Reform in the 1960s. She examines the recent conflict between male Catholic authority and leaders of the female orders, specifically within the context of the evolution of these orders since Vatican II, and concludes: 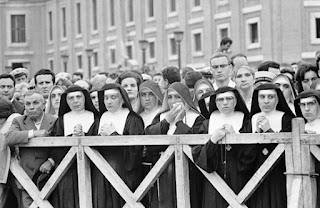 Before Vatican II, the majority of American women religious worked in Catholic institutions as nurses and teachers, a form of service that created an impressive network of Catholic hospitals, parish schools, colleges, and orphanages in the first half of the twentieth century. In the aggiornamento that followed the Council, many American sisters came to the conclusion that the conciliar vision of radical solidarity with the whole human family that is central to Gaudium et Spes meant that they should serve the most downtrodden and disfranchised members of American society, addressing pressing social needs of the time. In the 1970s and 1980s American sisters moved out of Catholic institutions and began to work in a wide variety of social programs. They developed new programs that addressed structural injustices, especially those that disadvantaged women and people of color. They ran shelters for women who were victims of domestic violence, developed educational programs for incarcerated women, counseled people with drug addictions, and opened food banks. Sisters volunteered to teach at traditionally African-American colleges in the South. They opened free summer enrichment schools in housing projects and offered job placement services to the unemployed. They marched at Selma, stood in solidarity with striking farmworkers in California, protested nuclear proliferation, and demonstrated against the School for the Americas. They created programs to encourage environmental responsibility and ecological justice.. . .

Sisters do not see their primary role in the postconciliar church as promoting the church’s recent emphasis on teaching about sexuality. They understand their role as standing in solidarity with humanity, ministering directly to human needs for food, shelter, education, health care, employment, respect, and justice.From this historical perspective, American sisters have followed a consistent trajectory that stretches from their obedient response to the reforms required by the Second Vatican Council to their present-day focus on works that promote human dignity, social justice, and equality. The Vatican, in contrast, has turned away from the more open conciliar model of ecclesiology and mission of its recent past toward a retrenchment of preconciliar modes. This view insists Church principles be defended by an elite cadre of male bishops and curial functionaries whose authority is absolute.

You may be through with history, the female religious orders are implicitly telling the Vatican, but history isn't through with you.