Skip to main content
Labels
Posted by linfordfisher May 23, 2012

Big Ideas in a Small State: Roger Williams and the 375th Anniversary of the Founding of Providence, Rhode Island 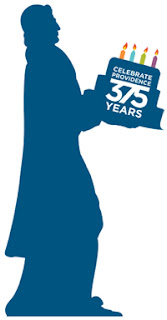 Well, you missed it. But you’re not alone. I’m talking about the 375th anniversary of the founding of Providence that took place last year, in 2011. The city put forth a valiant effort to celebrate this historical moment, but frankly, even as someone who works in Providence, the year slipped by for me with relatively little fanfare. There was some elation back in June, however, when the city archivist re-discovered the 1648 charter for Providence, which had apparently been lost (mis-filed, really) for decades. Throughout 2011, the city also hosted a series of events, including the inauguration of the “Independence Trail,” a Boston Freedom Trail –esque line of paint circling the downtown of Providence (our paint is green, not red) with dozens of stops and information points at historical sites. The Haffenreffer Museum of Anthropology at Brown did its part by showcasing an exhibit on the material culture of early Rhode Island and—outside Manning Hall—commissioning a newly-constructed stone wall and dugout canoe courtesy of a few Narragansett tribal members. The city also solicited a series of essays written by local historians. It all culminated with a birthday party celebration hosted by the mayor of Providence on November 22, complete with a massive birthday cake, live music, and a “food truck faceoff.” Classy. 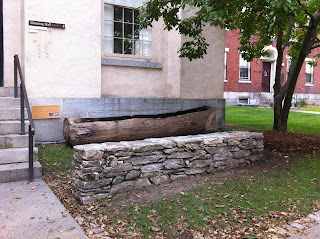 In many ways, however, the celebration is just getting underway. Next year marks the 350th anniversary of the 1663 post-Restoration Rhode Island charter from Charles II. And, really, there is a lot to celebrate if you ask residents of “Little Rhody”; Rhode Island is a fun and quirky state, to be sure. We have our own official state drink (coffee milk, which is on tap in the Brown dining halls), the longest official state name in the Union (The State of Rhode Island and Providence Plantations), one of the smallest national parks in the nation (Roger Williams National Memorial), purportedly the highest number of beaches per capita, and more restaurants per capita in Providence than any other city in the nation (thanks to Johnson and Wales). And as anyone who lives here will tell you, there’s nothing quite like some Del’s lemonade on a hot day or even an Awful Awful to cool you off. 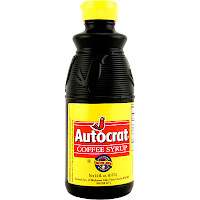 Historically, Rhode Island has always walked to the beat of a different drummer. It was the first to declare independence from Great Britain (May 4, 1776), it performed the first act of military defiance (burning of the Gaspee in the Narragansett Bay, June 10, 1772), it was the last of the original thirteen colonies to become a state, and it never ratified the 18th Amendment (prohibition). In matters of religion, during the colonial period Rhode Island never had a witch trial, never conducted a blasphemy trial, and never hanged (or even whipped, supposedly) anyone for their religious beliefs. Rhode Island also boasts the country’s oldest library building (Redwood Library and Athenaeum in Newport), the nation’s oldest Baptist church (Providence, 1638), the oldest Jewish Synagogue (Touro, in Newport; 1763), and New England’s oldest Masonic Temple (Warren). Even its notoriously political corruption is a secret point of pride (Providence voters re-elected the infamous Buddy Cianci as mayor in 1991 after he had previously been convicted of a felony and forced to resign the mayorship). 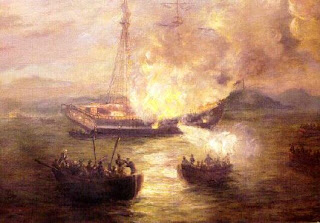 But another thing that Rhode Islanders love to celebrate is the state’s heritage of religious liberty. And towering over this particular legacy, of course, is Roger Williams, who is largely credited with the religious and cultural tenor of this state. So the 375th anniversary of the founding of Providence affords a unique opportunity to ask: Does anyone still care about Roger Williams? Or, to put it more politely, what is the current shape of Williams scholarship?

The answer is somewhat surprising.

As it turns out, we are currently in the middle of a mini-Williams revival. A year or two ago I would have said (and indeed, did say in several classes) that the scholarship on Williams and the question of religious liberty has been leaning away from Roger-Williams-centric interpretations of the origins of religious liberty in America. One thinks of the way in which the eventual religious diversity and toleration of New York, Pennsylvania, and even South Carolina have increasingly been recognized (as just one small example, see Burke and Edgar, The Dawn of Religious Freedom in South Carolina [2006]). But several recent items and events make me think that, by certain measurements, Williams and Rhode Island may well be receiving renewed attention. 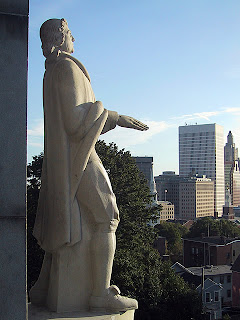 The first is a recently published book by John Barry: Roger Williams and the Creation of the American Soul (2012). Since I’ll be posting a more comprehensive review here in a short while, I won’t say more except to say that Barry is working hard to bring Williams back, and with a vengeance. (This blog has also featured Barry’s book previously.)

Additionally, one of the most interesting things coming down the pipeline is a multi-year series of programs tentatively called “The Spectacle of Toleration,” funded and organized by the Newport Historical Society in partnership with Brown University and Salve Regina University. Timed to celebrate the 350th anniversary of the 1663 Rhode Island charter, the steering committee hopes to open large questions about the origins, legacies, and meanings of religious toleration that took root here in Rhode Island. In addition to some public programming, the culminating event will be a national academic conference in the fall of 2013 on the issue of religious toleration (look for a call for papers later this fall).

This conference, however, is intentionally not centered solely on Roger Williams. If Providence celebrates Williams, Newport celebrates John Clarke, one of Rhode Island’s other founders. Ousted from New England during the Antinomian controversy, Clarke headed south to Rhode Island to co-found first Portsmouth and shortly thereafter Newport. As a learned Baptist minister, Clarke’s treatises on religious freedom—including Ill Newes From New England (1652) are often seen on par with Williams’ in terms of important articulations of Rhode Island’s policy of freedom of conscience. There was even a failed attempt in the nineteenth century to claim that Clarke’s Baptist church in Newport was older than Williams’ in Providence. Nonetheless, Newport folks like to remind us all that Rhode Island actually had four important nodes of early settlement: Providence (1636); Portsmouth (1638); Newport (1639); and Warwick (1642), all founded by religious dissidents of various sorts, such as Anne Hutchinson, William Coddington, Samuel Gorton, Philip Sherman, and of course Roger Williams. So perhaps one important aspect of reclaiming whatever legacy of religious toleration does rightfully belong to Rhode Island’s history will be a more expansive view of the multiple voices and multiple foundings of the colony. 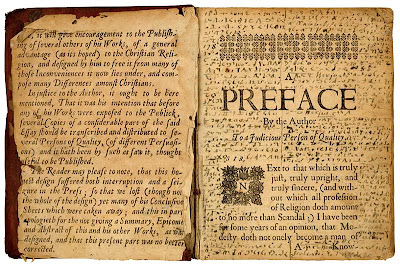 Some of the recent Williams-related developments, however, are a bit more obscure, but equally as interesting. In the vast holdings of the John Carter Brown Library on Brown’s campus is an enigmatic book. Actually, it is not so much the book itself that is of interest; it is the pages upon pages of chicken-scratch shorthand that fill every square inch of white space in the margins and front and back of the book. The book—and the shorthand in it—has long been assumed to be Roger Williams’, but for decades, if not centuries, no one was able to crack the shorthand. Enter a group of incredibly optimistic and hardworking Brown undergrads, led by Simon Liebling and Chris Norris-LeBlanc. Compiling a small cadre of undergrad historians, linguists, and mathematicians, the team read widely on the history of shorthand and toyed with high-tech ways of discerning patterns. In the end, however, the solution was deceptively simple: they found a seventeenth-century shorthand textbook that provided an almost instant key to Williams’ scrawlings.

The code was cracked.

Decoding the shorthand led them to another discovery: most of the the shorthand was simply a hurried summary of the contents of another book, Peter Heylin’s “Cosmographie in Four Books,” published in 1654. Nonetheless, there is a central section of the shorthand that seems to be Williams’ own thoughts in which he references people like John Eliot, a Puritan minister and missionary in Massachusetts. Liebling and Norris-Leblanc have attracted the interest of the Brown Daily Herald and the Providence Journal so far. But Williams’ shorthand is in yet another book that the team also hopes to decode: Williams’ personal copy of the so-called Eliot Bible, which was a translation of the entire Bible by John Eliot and some Indian servants into the Massachusett Indian language in 1663. A few of us secretly hope that Williams’ shorthand in the volume of his copy of the Eliot Bible will contain some additional ethnographic musings from Williams, sort of like A Key into the Language of America, part 2. 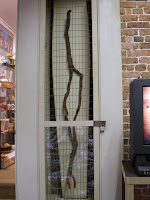 There’s more one could say about how Roger Williams continues to inspire and haunt this great city. I’ll leave you with this. If you are ever at the John Brown House Museum on College Hill, ask the receptionist to see the Roger Williams root and hear its story. This experience alone will give you a sense of the staying power that Williams has had and will likely to continue to have in this endearing city and state. In the meantime, brace yourself for more national discussions regarding Williams, Rhode Island, and religious liberty (if nowhere else, on this blog in the coming weeks when I post my review of Barry’s book).
Email Post
Labels: lin's posts native americans new england religion in colonial America religious tolerance and intolerance

John Schmalzbauer said…
Finally, someone who mentions Rhode Island Coffee Milk (Autocrat syrup, no less!) in a post about Roger Williams. My Ozarks students always looked at me blankly when I tried to explain this tasty drink.
May 24, 2012 at 10:46 AM