A Churchless Man Seeking the Pure Fellowship: Or, Will the Real Roger Williams Please Stand Up?

I'm happy today to post this guest gig from Curtis Freeman, Research Professor of Theology at Duke Divinity School. Freeman specializes in Baptist history, and here reflects on views of Roger Williams as seen in John Barry's new book and elsewhere. We had previously blogged about this book here. 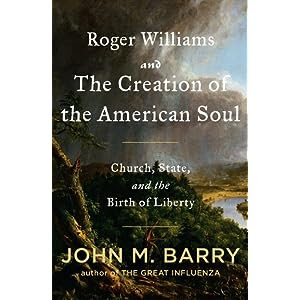 Gordon Wood has written an insightful review of John Barry’s important book, Roger Williams and the Creation of the American Soul: Church, State, and the Birth of Liberty, in the current issue of The New York Review of Books. Wood credits Barry with having written one of best biographies of Williams to date, which as he observes is significant “since Williams is surely the most written about figure in seventeenth-century America.” Barry confesses to not being interested in the biography of Williams’ life per se, but rather in his role in the shape of religion in American public life, and in particular the beginning of the argument about church and state. It is here, however, where Wood observes that Barry’s book overreaches, noting the title, which suggests that Williams was the creator of the American soul, is surely exaggerated.

Barry, however, is not alone in linking Williams with the founding of American democracy. Robert Bellah appealed to Roger Williams as the fountainhead of radical American individualism. More recently Martha Nussbaum, in her book Liberty of Conscience, similarly appealed to Williams as the progenitor of American democratic liberalism. It is an old thesis, forgotten but not dead, first voiced by Vernon Lewis Parrington, in his 1927 Main Currents in American Thought. Parrington presented Williams as a seminal thinker, describing him as an individualistic mystic and forebear of Transcendentalism, but most importantly as a political philosopher and forerunner of democratic liberalism. Parrington portrayed Williams as a proto-Jeffersonian who anticipated Locke and the natural rights school, thus becoming one of the great heroes in the progressive vision of American intellectual life.

But it is not just academics that have bought into the view of Williams as a civil libertarian. Denominational newspaper editor and church-state separation advocate, J. M. Dawson, claimed Williams as a representative of the historic Baptist position of church-state separation that was transmitted through Isaac Backus and John Leland to Thomas Jefferson and James Madison. Dawson’s panegyric account in his 1956 book Baptists and the American Republic makes for a nice story, if it were only true. It is not the fact that Williams was only a Baptist for a few months that makes Dawson’s claim unbelievable. It is that Dawson showed no historical connection of the appropriation of Williams by Jefferson. There is, however, historically demonstrable evidence to indicate that John Locke, not Roger Williams, was the principle source of religious liberty for Jefferson and Madison.

Perry Miller countered the progressive view of Williams derived from Parrington and challenged scholars to engage Williams on his own terms, which were theological not political. Though Barry identifies Williams as puritan, as Wood notes, he looks chiefly to Edward Coke and Francis Bacon (neither of which was a puritan) to find sources of Williams’ political thought. Wood’s suspicion of historical revisionism puts him in the company of his Brown colleague, William McLoughlin, and his Harvard mentor, Perry Miller. McLoughlin concluded that “despite the valiant efforts of Williams, almost no one in colonial New England ever praised his experiment, sought his advice, quoted his books, or tried to imitate his practices.” Perry Miller put it succinctly: “As for any direct influence of [Roger Williams’] thought on the ultimate achievement of religious liberty in America, he had none.”

What Wood reminds us, and what Barry misses, is that Williams was a radical separating puritan. In his classic study on Williams, Edmund Morgan corrected the view of Cotton Mather that Williams had “a windmill in the head” and “less light than fire in him.” Still, Morgan concluded that Mather was right to see the danger of the radicalism Williams represented to civic life. The often invoked analogy in which Williams likened the church to a garden was not an account of the separation of the church and the state where Williams expressed equal concern about protecting the integrity of both church and state.

On the contrary, Williams envisioned a radical ecclesiology in which the church must be strictly separated from the world. Initially he thought this could be achieved by weeding the garden, first among the Separatists and then with the Baptists. When his hopes of a radically pure church faded, he renounced ties to all churches. He lamented that God had broken down the wall and the worldly vines had choked out the garden. The only hope was to await the coming of Christ, the heavenly gardener, who would prune back the weeds so that the roses might again bloom. Far from being a forerunner of Jeffersonian democracy, Williams was a stickler for an apocalyptic separatist ecclesiology. He became, as Perry Miller aptly described him, “a churchless man seeking the pure fellowship.” Revisionists seem to want the myth of a de-puritanized Williams as the champion of liberal democracy. The real Roger Williams was a much more complicated and untame figure than these sanitized versions can tolerate.

Matthew C. Baldwin said…
This is a helpful corrective to those would like to dress Williams up in a costume more appropriate to the Enlightenment era.

But if we deny all influence of Williams on subsequent debates on religious liberty, aren't we ignoring (a) the publication of his Bloudy Tenet in England and his protracted stay there and (b) the probable influence of the early experiment with toleration in Rhode Island?

Never mind that Williams was only a Baptist for a short time. Isn't it clear that at least SOME early Americans and some sympathetic Britons must have read his works and that advocates for religious liberty would have looked to Rhode Island as a precedent?
April 29, 2012 at 11:23 AM

Curtis Freeman said…
Thanks for posting, Matthew. Good questions. It is counter-intuitive, isn't it? The Bloudy Tenent was written hastily and is a repetitively redundant mess. It attracted little interest in England unlike his little book, A Key into the Language of America, which was widely read and well received in England. Williams and Rhode Island were so villified by contemporaries as to be virtually ignored. It's only in retrospect that he looks so much more modern. And for people like Parrington, who wanted to write the Puritans out of US history, Williams became a convenient trope. But as McGloughlin and Miller make clear, there's little to no historical evidence to demonstrate that Williams actually influenced the shaping of US church-state policy.
April 30, 2012 at 7:50 AM

Robert Mills said…
So you are supporting Edwin Gaustad's biography of Williams in that you see him as a figure that moved forward religious freedoms but not political liberty? Is this a fair assessment and if it is why not mention Gaustad?
April 30, 2012 at 9:15 AM

Curtis Freeman said…
Gaustad has two biographies, one published by Eerdmans and the other by Oxford. They're very similar. Imo Gaustad has the best current biography. Barry's book, by his own admission, isn't a biography. My quibble is with folks who want to credit Williams with the origins of American political freedom. That's a historical claim, but it doesn't hold. Jefferson got his notions of liberty from Locke, not Williams. Indeed, I think his radical separatism made him suspicious of all civil institutions. But as I argue at length in the essay on Williams, I see him as a fruitful model for how to live at peace in an increasingly violent world. That still may have political implications, though for him it was religious and theological.
April 30, 2012 at 12:07 PM

Michael Taylor said…
Pardon me for digressing from this interesting discussion, but while Roger Williams may not have had any direct political descendants, he is said to have had actual descendants, including at least one prominent American Civil War officer in the Union Army, Elisha Hunt Rhodes, who rose in four years from Private to Colonel of the 2nd Rhode Island Infantry Regiment. His diary and letters, published in "All for the Union" (New York: Knopf Doubleday Publishing Group, 1992), were extensively quoted in Ken Burns' PBS documentary, "The Civil War". http://en.wikipedia.org/wiki/Elisha_Hunt_Rhodes
May 1, 2012 at 7:54 PM