In Heaven as It Is on Earth 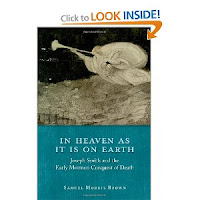 Samuel Brown's In Heaven as It Is on Earth: Joseph Smith and the Early Mormon Conquest of Death is an unusual and remarkable book. Brown, a critical care pulmonologist, offers a rich and persuasive reinterpretation of Joseph Smith's most significant theological and ritual innovations.

I'm working on a fuller review of the book, so a brief encomium must suffice for now. No one working on Joseph Smith or early Mormonism will be able to ignore this work, challenging but rewarding in its careful analysis.

Smith had a vision, a revelation ... and as his mind roamed over the conceptual landscape he inhabited, myriad phenomena came to speak of this great revelation. Smith was a translator rather than a parrot, an artist rather than a collator.

With his careful attention to the way Smith transformed the theological and philosophical beliefs he inherited and encountered, Brown offers fresh insights into a whole host of flashpoints within the study of early Mormonism: treasure-hunting, Smith's translations of ancient texts, the endowment ceremony, and plural marriage. Moreover, Brown frames all of Joseph Smith's work around the prophet-translator-seer's grief over the death of family members (especially his brother Alvin). Smith's ritual innovations offered himself and other Latter-day Saints the chance to confirm familial ties and also create an ecclesiastical family that would extend beyond the grave.

Brown's book makes much about early Mormonism make sense. Why did so many Latter-day Saints plunge into the muddy Mississippi River to be baptized for their ancestors in 1840? Why did church members nearly overwhelm Brigham Young in a stampede to obtain their endowments before the exodus during the winter of 1845-46? More so than most authors, Brown explains how what at first appear to be esoteric religious rituals held great appeal for (at least some) antebellum Americans living amidst the constant fear that death would separate them from their loved ones. Brown also helps explain the ongoing appeal of Joseph Smith's religious vision:

Ultimately, my impression of the legacy of Joseph Smith is that what matters is who we see beside us when we discover that we are in the precincts of death. Whether mortal or immortal, whether living or dead, what matters is who our companions are, to whom we have committed ourselves ... religion for Joseph Smith and his followers ... provided a company of Saints who could walk toward, and -- earnestly, anxiously -- through death with each other.
Email Post
Labels: Mormonism new books turner's posts