Gods of Liberty: An Interview With Thomas Kidd

I'm pleased to post this interview with Thomas Kidd, prolific author of books on eighteenth-century American religious history and Professor of History at Baylor University. In the last couple of years, Kidd has published God of Liberty: A Religious History of the American Revolution, and most recently Patrick Henry: First Among Patriots (some New England Patriots fans might think that Baltimore's errant field goal kicker Billy Cundiff is first among Patriots, but Kidd's book was already out). Kidd below reflects on his training, his choice of book topics, and his understanding of the role of religion in the American revolutionary era.

PH: Tommy, you came up through a program, at Notre Dame, which seems to be producing a lot of younger stars in the field lately – including younger luminaries who have blogged here such as Darren Dochuk, John Turner, and Heath Carter (and obviously we could name many more besides). Can you say something about your training in a program that has become so notable in religious history in recent years? And while Notre Dame historically (for obvious reasons) has been and remains a center for Catholic history, many of the up-and-coming PhDs from there write first books on topics such as your own The Protestant Interest. So how did Notre Dame come to be such as center for the history of Protestantism in America?


TK: Notre Dame was a wonderful place to do my Ph.D., not least because of the large cohort of students working on American religious history there. Obviously, American Catholic history is a longtime strength at Notre Dame, but when they recruited George Marsden (my doctoral advisor) to the history department, it also became a major force in the study of American Protestantism, and evangelicalism in particular. That strength is continuing with the replacement of Marsden by Mark Noll, and the wonderful Ph.D.s they are producing.

PH: What inspired you to take up the project of a Henry biography, and what do you most hope that American religious historians will take from your work both in God of Liberty and in the Henry book?

TK: Henry appears in both my Great Awakening book and in God of Liberty, so a focused project on him was an obvious next step for me. Henry was the most outspoken Christian among the major Founders, and I was intrigued by doing a biography of a Founder about whom there is little question about the seriousness of his personal faith. We’ll never lose interest in the faith of deistic Founders such as Jefferson and Franklin, but Henry’s traditional beliefs were surely more representative of much of the rank-and-file of the Patriot movement.

I would hope that readers of these two books would see that in the Founding era, American faith was both vibrant and diverse. Evangelicalism had a major role to play in the religious culture of the Revolution, of course, but it was a role shared with more liberal Christians, skeptics, and deists. Perhaps in a small way I can help the popular debate over religion in America’s founding move beyond zero-sum games where the Founders are either ALL traditional Christians or ALL deists and Enlightenment skeptics.


PH: Your previous book, published in 2010, God of Liberty: A Religious History of the American Revolution  outlines 5 broad tendencies, or “religious principles,” about religion and American society, that you believe united the revolutionaries and founders who otherwise disagreed with each other wildly on specific points of Christian doctrine. Can you say something about those principles?

TK: So much of the popular discussion of faith and the American Founding revolves around the personal faith of the major Founders. This is an interesting topic, but I don't actually think it tells us much about the role that religion played in the larger process of creating the American republic. So I sought to broaden the focus to the level of the public religious principles that helped unite the Patriots. These included religious liberty, the importance of virtue, the dangers of vice, the principle of equality by creation, and the role of Providence in human affairs. When you look at these principles, it is easier to understand why people of such sharply differing personal beliefs as Thomas Jefferson and the Baptist evangelist John Leland could cooperate so enthusiastically during the Revolution.

PH: As you know, historians have long debated the relationship of the Great Awakening to the Revolution, with some seeing the Awakening as a “democratizing” influence that fed directly into the same influence in the Revolution, while others insist that the Revolution was a political event which emerged for reasons apart from religious revivalism. Can you say something about your basic take on this debate?

TK: I don't think anyone would argue that the Great Awakening somehow caused the American Revolution, but I do believe that the revivals had a kind of conditioning effect on American culture that helped Americans get used to the experience of rising up against established authorities. The revivals also helped form an evangelical vocabulary of resistance that transferred easily to the rhetorical needs of the Patriot movement. But the most direct political result of the Great Awakening was the disestablishment of the state churches (outside of New England) and the constitutional guarantee of free exercise of religion. These were the greatest political accomplishments with regard to religion in the Revolutionary era.

PH: While there certainly has been a spate of biographies (to the extent that some dismiss it as “founders’ chic”) recently of Founding Fathers (and Mothers), Patrick Henry remains relatively unstudied, as you point out in your new book. Do you think this was because he was notably on the “wrong” side of two major issues – religious assessments (which he favored) and the Constitution (which he did not). Or is there some other reason? What, in particular, attracted you to write your book on Henry? 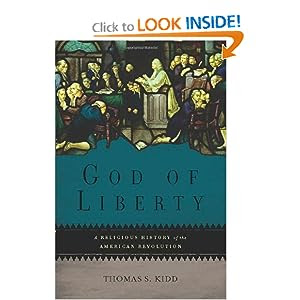 Thomas Jefferson (and to a lesser extent James Madison) has become so iconic in American pop historical memory that to stand against him almost seems like standing against American history itself. Henry and Jefferson developed a very bitter (at least from Jefferson's perspective) personal and political rivalry in the 1780s that culminated in Henry's opposition to Jefferson's Bill for Establishing Religious Freedom. Henry also became the leading Virginia Antifederalist, opposing Madison's Constitution. These positions certainly account for Henry's relative lack of celebrity among the leading Founders. But to me, they make Henry -- and the Founders themselves -- that much more fascinating. Although he joined Jefferson and Madison in promoting independence, their visions of how to implement and protect American liberty were starkly different.

PH: As you trace repeatedly through the book, Henry’s personal contradictions were pretty typical for the Virginia elite of his era – he was an indebted land-speculating slaveowner who hated debt and morally dubious speculation and was in theory opposed to slavery; he believed in religious freedom but supported a general religious establishment; he was an anti-Federalist who later became a Federalist and served Washington; and so on. It seems some of those contradictions follow him down to the present – although he remained a high-church Anglican, Henry is a hero to contemporary conservative Christians (including to the individual who recently founded Patrick Henry College). How do you explain this? Do the contemporary admirers of Henry, in your view, understand him correctly, or is there evidence of presentism or creating a “usable past” going on here?

TK: Henry is one of the most beloved Founders for evangelicals today because among the major Founders, he was the most outspoken Christian. He was also (like a number of the other major Founders) schooled almost exclusively at home, which makes him appealing to the burgeoning Christian homeschooling movement (a movement with which Patrick Henry College is closely associated). I think there are good reasons, then, for conservative Christians to appreciate Henry's role in the Founding. One aspect of Henry's career that conservative Christians – and political conservatives generally -- may not fully understand is his opposition to the Constitution. While many conservatives today have an almost religious veneration for the Constitution, Henry saw the Constitution as a betrayal of the principles of the Revolution.

PH: On a broader note, I’d like to ask a question about the religious history of early America. As I see it, there seem to be three major strands (at least – I’m oversimplifying hugely here) of scholarship: social/cultural histories which emphasize the wild diversity and religious conflict and violence in early America (as seen in books such as Jill Lepore’s In the Name of War Janet Lindman’s social history of early Baptists, which emphasizes notions of gender and embodiment); political/intellectual histories, including the books you have written, which tend to focus on a more traditional narrative of the major players involved in making the American nation-state; and then economic histories (such as Mark Valeri’s recent book), which often are about how major complexes of ideas (such as Puritanism) did or did not spur the economic explosion of the eighteenth century. Is there any way of synthesizing these vastly disparate historical approaches to early America, or do they just represent different philosophical views of history that cannot, and maybe should not, be “synthesized” into some kind of mush.

Perhaps these disparate approaches reflect a persistent reality about American religion: it always has been both diverse and thriving. I have tended to focus on evangelicalism's beginnings in colonial and Revolutionary America, partly because of my interest in the vitality of evangelical faith in America today. But viewed from other perspectives -- I would add Jon Butler's Awash in a Sea of Faith to your list above -- evangelicalism is just one thread in a very complex fabric.

PH: What are the projects that you’re currently working on? What kinds of books can we expect to see from you in the future?

I am writing a biography of George Whitefield that is due out in 2014 with Yale University Press, in time for Whitefield's 300th birthday.
Email Post
Labels: author interviews graduate school patriotism religion and scholarship religion and the american revolution religion in colonial America religious biography The N.E. Patriots Rule

Curtis J. Evans said…
Hi Paul,
excellent interview and really incisive and rich questions. I wish a little bit more "space" was provided for more detailed answers to some of these questions.
January 29, 2012 at 5:56 PM

Chris said…
Great interview. I think Kidd is right that we should remember that there was a diversity in religious opinion among the founders. People try to paint all of them into one box or the other, often for political purposes. I think it's also interesting how these diverse people rallied around a single cause. Don't really see that happening any time soon in the current atmosphere.
January 30, 2012 at 9:33 PM