Kelly Baker was all over facebook yesterday. The Florida State University facebook page was full of updates about the “FSU Zombie Apocalypse” in 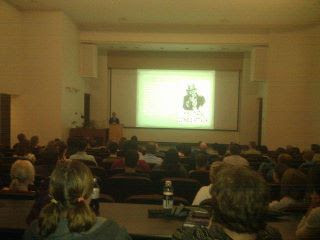 anticipation of Kelly’s public lecture yesterday afternoon hosted by FSU’s Department of Religion entitled “’There’s us and the dead’: The Zombie Apocalypse in American Culture.” One of these updates identified Kelly as “patient zero,” or the origin of the “zombie outbreak.” On our way to the auditorium yesterday to set up Kelly’s lecture, we passed some students filming brief interviews with others who participate in the popular “Humans vs. Zombies” tag-oriented game. The Tallahassee Democrat (city paper) ran a story on the lecture to encourage attendees, and there was even an extra from AMC’s “The Walking Dead” in attendance. This picture was posted live to the FSU facebook page.

Kelly has extensively investigated zombie genre movies, television, and fiction in order to identify the underlying themes of this genre and their ramifications beyond just “zombies are cool” and “blowing up zombies is fun.” Popular culture is not a neutral something that we consume; rather, zombie pop culture reflects larger cultural assumptions, visible, invisible, and everything inbetween. And Kelly has smartly identified how zombies are dangerous is ways far beyond the token zombie bite reference I could make here.

Kelly notes four “distinct thematic moves” in zombie eschatology: “a working through of what it means to be human, an uplift of survival-at-all-cost ethics, a celebration of necessary violence, and a vision of the American nation in which the sweeping social reforms of the 20th century (the Civil Rights movements and the women’s right movement) are swept away by zombies.” In short, she wants to know what is at stake in the recurring tropes of zombie eschatology. Sure, the presence of survivors could denote a hopeful end where humanity has bonded together to survive together. But, Kelly asked, at what costs? And even more importantly, who survives? Some humans do endure the post-apocalyptic world, but they do so surrounded by mounds of mangled human and formerly-human zombie corpses and much of this destruction was done by their own hands.

What particularly struck me about Kelly’s lecture was what race and gender have to do with zombie apocalypses – the “who survives” question. Again and again, the survivors of a zombie apocalypse are white, normatively heterosexual, and perform tired gender roles. The men are protecting, gun-slinging saviors of humanity. Woody Harrelson’s character “Tallahassee” from Zombieland is hardly an oddball is this post-apocalyptic, zombie-infested world. The women become damsels in distress whose rescue becomes part of the main action, and even if they fight zombies alongside the men, romantic involvement domesticates them.

Not only do the survivors re-inscribe stereotypical gender roles, they often re-inscribe the disturbing assumed normativity of 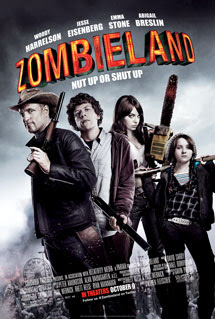 whiteness. The shambling, moaning zombies typically portray a wide range of racial and gender identities, which draws even more attention to white gun-slinging male and white emotionally-taxing female survivors. Racial and gender diversity defines the attacking force that needs to be dispatched. In a RAAC forum on “American Religion and ‘Whiteness,’” Tracy Fessenden and Edward Blum both identify how whiteness is an “unmarked” category and “taken-for-granted” in American religious history. The same can be said for zombie apocalypses. When the survivors are white, what does this say about the way we envision those who can “save the world?” Furthermore, if the survivors are inevitably the ones who will remake the world, then what does this say about an American popular culture that repeatedly selects whites to construct the post-apocalyptic world? Kelly raised other questions as well – as did attendees in the Q&A – about weapons, commodities, and fetishes; violence, war, and globalization; and the relationship between individualism and what it means to be human. The bottom line, zombies can tell us a lot.
Email Post
Labels: apocalypticism emily's posts gender and religion lectures religion and race zombies

Edward J. Blum said…
of the many reasons to be at FSU, that lecture sounds like one of the best ones. sounds like fantastic fun and terrific insights!
October 11, 2011 at 8:39 PM

Kelly J. Baker said…
Art, I would be interested to see how they do (in the 5K). I just downloaded a zombie apocalypse fitness training plan (they exist!), in which they coach participants to becomes sprinters not long distance runners for the obvious reasons.
October 13, 2011 at 7:40 AM