From Ghost Hunters to Protestant Spirits 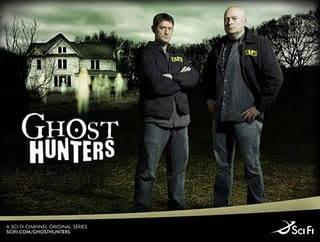 Today's guest post is from Sean McCloud, an associate professor of religious studies who teaches, researches, and writes about American religions as well as religion and culture. He is the author of Making the American Religious Fringe: Exotics, Subversives, and Journalists, 1955-93(2004) and Divine Hierarchies: Class in American Religion and Religious Studies (2007) as well as the co-editor of Religion and Class in America: Culture, History, and Politics (2009).

Classes started at my university last week. The hallways and corridors of my religious studies department—which were virtually left to the ghosts this summer—now brim with life as students and faculty fill the spaces. But even though the revnants have been temporarily pushed out of my hallways by the new semester, spirits have materialized elsewhere in various media forms. The new season of Ghosthunters, one of the original of the now dozens of ghost hunting reality television shows, began on the Syfy network Wednesday. Their often repeated commercial tells viewers that one out of three Americans believe in ghosts, though polls by Pew and CBS suggest that the number of those who accept the existence of departed spirits (and angels and demons) may be much higher—even when it’s not Halloween.

Aside from Ghosthunters, two other items conjured up spirits in my presence. The first was Terry Gross’s Wednesday Fresh Air interview with Rachel Tabachnick about The New Apostolic Reformation, a movement of Third Wave Evangelicals who are bringing their practice of spiritual warfare into the American political arena. In Tabchnick’s case, the Protestants are socially conservative and theologically tend toward charismatic and Pentecostal practice. The primary spirits they are focused on are demons, whom spiritual warfare practitioners seek to exorcise from individual bodies, objects, places, regions, and nation states. While the movement is numerically small, its influence can be seen in as variant examples as televangelist Pat Robertson’s 2010 comment that the Haitian earthquake was caused by a pact that the country’s founders made with Satan, former Alaskan Governor Sarah Palin’s videotaped deliverance prayer from the spirits of witchcraft by the African minister Thomas Muthee and Evangelical missionary strategies in Asia, the Caribbean, Africa, and Latin America (see, for example, Kevin O’Neill’s discussion of spiritual warfare in Guatemala in his book, City of God: Christian Citizenship in postwar Guatemala (University of California Press, 2010). I find Third Wave Evangelicalism and its practice of spiritual warfare fascinating, so much that I am writing a book that uses the movement as a case study to examine contemporary U.S. religious culture. And who doesn’t find ghosts, demons, and curses interesting? But at the same time, I am guessing that few American religion scholars (knowing the group’s charismatic and Pentecostal roots) would express surprise at the movement’s supernaturalism, which includes the aforementioned demons, but also angels, divine healings, and other miraculous events. But that is definitely not the case with the second spirit-filled item that has possessed my time: Pamela Klassen’s provocative new book, Spirits of Protestantism: Medicine, Healing, and Liberal Christianity (University of California Press, 2011).

In Klassen’s case, the Protestants under discussion are theologically and socially liberal, Canadian, and concerned with healings simultaneously medical and supernatural. Klassen rightfully notes that miraculous healing—as well as other forms of Christian supernaturalism—“have been more often associated with Roman Catholic or Pentecostal versions of spiritual healing”(xiv), rather than with liberal Protestants in denominations such as the Anglican Church of Canada and the United Church of Canada. She tells readers that her interest in liberal Protestants stems from the “lack of imagination” scholars have had in analyzing the Protestant versions of the “liberal subject” (xvii). Utilizing both historical and ethnographic approaches, Klassen focuses on activities centered around healing. She hopes to reveal the diversity and “messiness” of liberal Protestant practice. I am just a few chapters into it, but Spirits of Protestantism is already effectively battling stereotypes (by examining what Klassen aptly dubs “supernatural liberalism”) and breaking down borders (by focusing on Canadians who are often involved in medical missions). Klassen’s study is also contributing to the cultural history of the study of religion by registering the connections between the anthropology of religion and supernatural liberalism. Spirits of Protestantism looks to be a rich, complex, and promising work that I plan on adding to my spring semester graduate seminar on American religions. In the meantime, I am hoping that the local university spirits will keep their poltergeist activities to a minimum so that I can finish the book before fall semester classes start possessing me.

I would beg to differ with your statement that the New Apostolic Reformation is "numerically small". While any effort to get a grip on the movement's numbers would certainly be stymied by the fact that it is now well established within existing denominations (in other words, there's membership crossover with denominational Christianity), nonetheless the pool of Third Wave Christians from which the NAR is coalescing was estimated, by World Christian Trends AD30-AD2200 to have been 295 million strong by the year 2000. As C. Peter Wagner observed in a 2008 Wagner Leadership Institute lecture, it's bigger now - over 400 million according to Wagner.

Part of the problem, also, is that the NAR expands through the hegemony of ideological diffusion, with its ideas typically preceding in advance of its overt apostolic structures. This means that many people influenced by distinctive NAR ideas and practices such as Spiritual Mapping can nonetheless be unaware of the NAR movement's very existence and so would not identify as members though they might be in process of coming under the NAR's ideological sway.

Anonymous said…
Yes, you are right, Bruce, especially your point that people can practice Third Wave/NAR rituals and affirm their ideas without knowing about the movement's existence. Thanks for the comment. Best, Sean
July 9, 2012 at 9:22 AM