One may ask what do Mormons and modern Pagans have in common in today’s religious marketplace? A recent post by a prominent Pagan blogger tells us: multiple-partner marriages. Last Tuesday, Jason Pitzl-Waters, who writes The Wild Hunt blog, posted about a recent Mormon polygamy case in Canada and the impact that they might have on Pagans in Canada and potentially the U.S. While paganism is not known for polygamy, it has a widely known association with polyamory. (As one example, see Raven Kaldera's book, Pagan Polyamory: Becoming a Tribe of Hearts.) For those not familiar with the term, polyamory is defined by Maura I. Strassberg, Associate Professor of Drake University Law
School, as:

a form of commitment which is flexible and responsive to the needs and interests of the individuals involved, rather than a rigid institution imposed in cookie cutter fashion on everyone, this new polygamy reflects postmodern critiques of patriarchy, gender, heterosexuality and genetic parenthood. 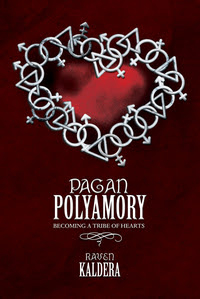 Strassberg calls polyamory a kind of ‘post-modern polygamy.’ This is not the only term used. She points to the web site/magazine, Loving More, a polyamory advocacy site, as a place where the numerous polyamory-related terms are defined. Other terms Loving More adds include: Poly-Family, “a group polyamorous people all the people living in or sharing life experiences in the same home or household”; Poly activist, “a person interested in taking action intended to counteract the political, social and religious enforcement of monogamy”; and One True Way Polyamorist, “a person who believes there is only one right way to be polyamorous often based on their own moral judgments (most believe there are many ways to be poly).”

This kind of diversity and specificity is not always appreciated by others. As Pitzl-Waters points out in his blog post, legal authorities have rarely cared to make a difference between polygamy and polyamory. He quotes Craig Jones, lead attorney for the British Columbia Attorney General’s office as saying, “When multi-partner, conjugal relationships are like ‘duplicative marriages,’ they are criminal regardless of whether the individuals are heterosexual, gay, lesbian, bisexual or transgendered.” It is this legal status that is causing the concern in pagan communities.

At a time when many celebrate the recent legalization of same-sex marriages in New York state, some question if the celebration is premature or what same-sex marriage legalization means for other types of marriage. This issue is certainly the one discussed by Strassberg in her 2003 essay in The Capital University Law Review where she notes,

The emergence of polyamory suggests that continuing efforts to legitimize same-sex marriage may raise questions about whether legalizing the marriage of same-sex partners would force the future legalization of polyamorous group marriages. (31.3, 443).

It is these concerns over future restrictions/prosecution that emerged within the pagan blogosphere. Within two-days, Pitzl-Waters’ post has received over 100 comments and other pagans have continued the conversation on their blogs and forums. (For examples see here and here.) Pitzl-Waters also mentioned the possibility of pagans working in tandem with Mormons to legally challenge marriage restrictions, and some think there is common ground to be found. However others, as quoted by Pitzl-Waters, have their doubts.

I can conceive of legal efforts which serve both groups’ interests, but I have difficulty imagining it politically. The movements have different cultural aims and have different relationships with the society at large. People in each movement tend to find the practices of the other distasteful, making any alliance fraught. Both groups would hesitate to focus only on tactics which support both groups. Both groups may fear that it will compromise their efforts if the public foresees benefits to the other group.

In June 2007 Salon.com published an essay discussing a retreat in central Florida for people practicing polyamory. The essay quotes a 2002 survey conducted by Loving More which claims that while 87% of those who took the survey where raised as Christian, approximately 30% of the respondents converted to paganism. It also stated that one retreat workshop was entitled “Poly and Christianity.” (This certainly would be an interesting topic for someone’s dissertation!)

The issues regarding sexual relationships, marriage and religion are not new to scholars of American religious history. We can point to Oneida, The People’s Temple, and many other groups who encouraged or demanded various sexual and marital practices. Yet there is a tendency today to think that polygamy is primarily a Mormon issue. If Pitzl-Water’s blog post and the ensuing discussions are any indication, polygamy, polyamory and multiple-partner marriage are clearly issues that concern American paganism too.
Email Post
Labels: alternative religions alternative religious traditions FLDS John Crow's posts marriage Mormonism Mormons paganism polyamory Polygamy religion and sexuality wicca

Charlie McCrary said…
Nice post, John. I am especially interested in the idea that many polyamorous pagans don't see one "right way" to do polyamory. The most common protest to Mormon polygamy, it seems, is that it reinforces patriarchy. However, this idea of "post-modern polyamory" appears to allow for the transcendence of that system. I'm just wondering, being completely unfamiliar with this, if that actually happens. Are there pagan exclusive relationships with, say, one woman and three men?
July 29, 2011 at 8:28 AM

Jason Pitzl-Waters said…
First off, thanks for the mention here. I'm a regular reader of this blog, and I'm flattered to have my work mentioned.

In response to Charlie, yes, there are committed Pagan relationships with one woman and two or three men. Though triads, one woman, two men, is far more common.
July 29, 2011 at 9:19 AM

Panmankey said…
Thanks for linking to my blog (I was the first "here"), and thanks for the great post. Fundamentalist Mormons and Polyamorous Pagans make for strange bedfellows, but polygamy and polyamory have too much in common to ignore each other.

Some of the first polyamorous relationships I encountered in Paganism were between one woman and two men. It's not the average relationship, but it's not uncommon either.
August 1, 2011 at 3:37 PM