The Look of Catholics

Last month, Paul asked me to review Anthony Burke Smith's recent book The Look of Catholics: Portrayals in Popular Culture from the Great Depression to the Cold War. This is an enjoyable book and a really fun read. In particular, for those who teach courses on Catholicism in the US, this book would be a good option for undergraduates since it uses the familiar medium of popular culture.

According to Smith, American popular culture had “gone Catholic crazy at midcentury.” For Smith, popular culture matters because looking at representations by Catholics and of Catholics during the 1930s, 40s, and 50s, elucidates “the cultural struggle over national definition.” At 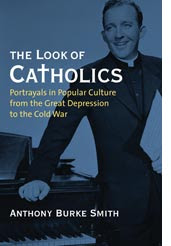 first, this may read as yet another rehash of an oversimplified interpretation of Will Herberg’s famous Protestant, Catholic, Jew, but Smith’s book goes deeper than that. Rather than argue that Catholics were merely integrated into the realm of acceptable identity, Smith’s foray into popular culture illustrates how a new American identity was fashioned from the Great Depression to the Cold War and that Catholicism played a significant and formative role in this development. The visual depiction of Catholics offered an embodiment of American values, patriotism, and anxieties. During the 1930s, Catholics represented the necessity of reform pluralism, and afterwards they characterized the conservative focus on religion, home, and family. Catholicism went from symbol of a “socially reformist vision of America” through “Catholic communalism” to “more conservative visions of the nation” through “images of Catholic community and authority,” and this development shows the malleability and flexibility of Catholic identity and imagination in the development of a new national identity.

In the 1930s, the urban parish priest represented the urban, ethnic, working-class Catholic population, and this population was the center of reform politics. Urban savvy and crime fighting, the priests in films like Angels with Dirty Faces 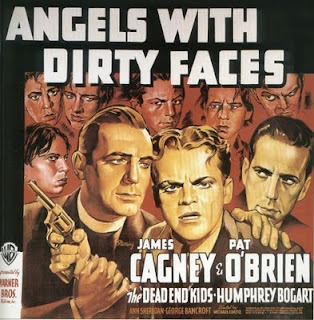 reflected Catholicism’s ability to be a voice of moral authority and social reform. However, this image of the priest as “the cultural twin” of “the famed ethnic mobster,” changed with Bing Crosby’s depiction of a youthful and modern parish priest who is also “the hip denizen of the wider world” in 1944’s Going My Way. Father O’Malley is a “cool” priest, accessible and popular because he reflected a changed, modernized, revitalized Catholicism that can relate with outsiders, adversity, youth, and all social challenges and changes. The image of the priest changed again with the popularity of Fulton Sheen’s media shows like television’s Life is Worth Living. Sheen’s appeal came from his ability to connect with the post-immigrant generation searching for their own cultural identity apart from their parents’ enclave (much like the “immigrants’ daughters” in Orsi’s Thank You St. Jude). Sheen highlighted the traditional American values of family and home more generally, and, more specifically “the anti-modern Catholic romance of spiritual rejuvenation and moral adventure.” Anti-communism certainly played a role in Sheen’s message for America was a symbol of virtue, and the soul of the nation was at stake with the epic battle between America and communism. Though these priest examples range from movie characters to an actual auxiliary bishop, they elucidate the evolving “look” of the Catholic clergy in America and how their support of reformist and then consensual visions of America developed alongside the rest of the nation.

Along with this transformation in the depiction of priests, Smith tracks the changing focus of Catholic movie directors. Directors like Leo McCarey and John Ford also illuminate the changing “look” of Catholics from more liberal interests in social reform in the 1930s to traditional consensus in postwar America. The book’s middle chapter focuses on the portrayal of Catholics in Life magazine from that of odd, alien outsiders who practice an exotic religion to a symbol of patriotism, community, and moral strength. In Smith’s words, “voyeuristic treatment of Catholicism in the thirties thus gave way to patriotic and affirmative imagery during the forties.”

Smith’s work raises some interesting questions. The Look of Catholics illustrates how Catholics were portrayed in the products of popular culture, but I still have questions regarding the consumption of that popular culture. Going My Way was a very popular and successful movie, but did it really change the way the general American populace felt about priests? Michel de Certeau’s The Practice of Everyday Life encourages us to focus on the actions of the consumers – what they do with the products they take from the society around them. Though de Certeau largely viewed popular culture through 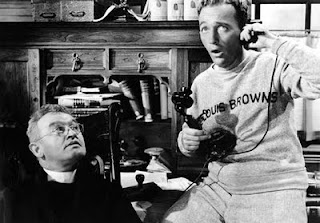 his theoretical lens of strategies and tactics, this focus on how the consumer uses popular culture (as opposed to the notion that they passively receive it) raises questions about the everyday reception of Smith’s movie, television, magazine, and radio examples. His analysis of the way Catholics were portrayed is fascinating and the relationship of their “look” to developing notions of American political identity is illuminating, but what about the everyday non-Catholic consumer of these products? In 1946, one disgruntled Protestant movie go-er asked the Motion Pictures Producers’ Association “How much longer do we have to tolerant Catholic pictures?” Smith uses this letter and the existence of others like it to note “the cultural significance of popular Catholic films,” and while some complained, “many moviegoers liked Hollywood’s Catholics.” Clearly, the success of these films proves that many Americans – Catholic or otherwise – enjoyed them, but I kept wanting Smith to go one step deeper in their reception and consumption.

I also couldn’t help but wonder about American Catholic support for fascism in the 1930s and how that would affect their portrayals in popular culture. Peter D’Agostino’s Rome in America: Transnational Catholic Ideology from the Risorgimento to Fascism counters the progressively assimilationist narrative of American Catholicism by providing a history of “the Roman Question,” or American Catholics’ concern over the loss of the pope’s temporal and geographic sovereignty of the Papal States. When Mussolini supported Catholicism and joined the pope in his struggle against Liberal Italy, he secured Vatican City for the pope and resolved the Roman Question. This encouraged both large sectors of Italian-American Catholics and the Catholic population in general to begin “preaching fascism.” In fact, D’Agostino identifies the anti-Fascist Catholic spokesmen of the 1930s as “lonely.” Smith argues that the “look” of Catholics in popular culture reflected larger issues in national identity and political conflict, but Catholic concerns of papal sovereignty and their support of Fascist Italy – perhaps the most politically pressing issue in American Catholicism for D’Agostino – never surface among Smith’s popular culture sources. Maybe fascism was there, maybe it wasn't, but if D'Agostino is correct, fascism should be part of any conversation regarding national definition, politics, and Catholics in this time period.

Though D’Agostino’s work may ask questions of Smith’s book, the two narratives together provide a new way to look at Catholics and consensus at midcentury. According to D’Agostino, after World War II many Catholics were quick to say that they had always been anti-Fascist. Concurrently, popular culture increasingly portrayed Catholics as the epitome of national identity – an ethnically and religiously plural society that together extolled family, religion, moral character, personal faith, and national pride. In both books, the idea of American identity did not just slowly encapsulate Catholics in an inevitable progressive fashion; rather, the creation of consensus and the inclusion of Catholics in it was a more active process, which Catholics took part in, and in doing so, they helped remake American identity.