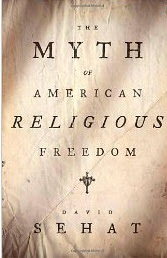 Some time ago I posted a very substantive two-part interview with David Sehat, author of The Myth of American Religious Freedom. In the interim, over at David's group blog U.S. Intellectual History, several of his fellows (and some others, including Dan Williams, whose book on the religious right, God's Own Party, has received extensive attention here) have responded to and critiqued David's book. More specifically, the blog has posted responses and critiques from Daniel K. Williams, Andrew Hartman, Ray Haberski, and Christopher Hickman.
That forum has now been completed, with David's response to his critics. Taking the responses, and David's reply, all together, is a great intellectual treat, so I wanted to make sure and provide the links to it here for those of you who don't customarily cruise over to their blog. This is pretty hefty intellectual history, so I wouldn't advise it for beach reading, but for those who complain that U.S. historians are excessively specialized and never take on the big picture or grand narrative anymore, here's your answer (or at least one answer) to that.
I also call attention to this because in his response David provides some of the intellectual/theoretical underpinning behind the structuring of his book -- so this is sort of his short "discourse on method," if you will, or a kind of theoretical appendix. He also uses his response to emphasize a point sometimes lost in discussions of his book, which is how much of the book is actually about religious dissenters who stood outside the moral establishment, poked holes in it, and (to my mind) showed that American religious freedom ultimately was not a myth after all.
Sehat divides his responses up into issues of 1) secularization; 2) pluralism; and 3) moral minimalism. Here's a brief excerpt from the first part, about his understanding of the term "secularization":

My book focuses on the role of dissenters to the moral establishment—those who objected to the reach of religious authority into law and government. Dissenters were central to the decline of the moral establishment and the secularization of American public life, a secularization that, I must add, is tenuous and seems, in the last several decades, to be moving into reverse. And it is this understanding of secularization that apparently did not come across as clearly as I wished. Williams, for example, thinks that I depict religious liberals as people “who quickly realized that their arguments did not depend upon religious faith and who therefore embraced secular language in advancing human rights.”

But this is not quite what I say, or at least what I intended to say. I sought to say something at once more specific and also stronger: Religious liberals, precisely because of their religious beliefs, were agents of secularization, a secularization that involved the expansion of rights because it meant the decline of religious authority outside the sphere of religious institutions.

Just a short addendum. IN the middle of his response, after a lengthy explanation of how exactly he is using the term secularization (basically, to mean a decline in the public authority of religious institutions, not to mean a decline in individual religiosity), Sehat says that this secularization is "tenuous and seems, in the last several decades, to be moving into reverse.." Just after initially posting this, I came across this piece about Governor Rick Perry (R, Texas) and his call for and imminent leadership in an August 6 "day of prayer and fasting on behalf of our troubled nation." The event is sponsored by (among other groups) the American Family Association -- of which much could be said, but which most recently linked homosexuality to "increasing ungodliness and depravity assaulting our nation" (you know, like all those political sex scandals, Ensign, Weiner, et all -- oh wait, they weren't gay scandals, never mind). Perry described the event, which will be held in a stadium in Houston, as an "apolitical Christian prayer service" which will provide "spiritual solutions to the many challenges we face in our communities, states and nation."

This blog expects Historianess to be there and live-blogging this latest gathering of the erstwhile moral establishment.