Skip to main content
Labels
Posted by Paul Harvey May 28, 2011

Jesus and Jefferson: Mark Noll Reviews Dochuk and Williams in The New Republic 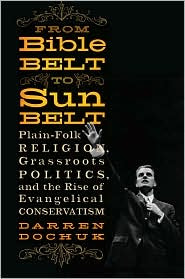 Paul Harvey
Here's a discussion of interest to many: Mark Noll reviews Daniel Williams, God's Own Party, and Darren Dochuk, From Bible Belt to Sunbelt, in the most recent New Republic -- a teaser is online, but you'll have to get the magazine for the rest (or, email me and I'll send to you). Here's a small excerpt:
Recent studies have begun to do better, with two of the best being these books by Daniel K. Williams and Darren Dochuk. Williams, who works from the top down in attempting a broad national perspective, does as well as any writer to date in answering the basic questions of what went into making up the religious right and specifying when the movement coalesced. Dochuk, who works from below in a superbly researched study of grassroots political mobilization, goes far to answer the question of where it came from. The solid history in these volumes should be applauded by all as a welcome alternative to the frenzy of earlier efforts. Yet neither Williams nor Dochuk addresses directly what should be one of the most compelling questions about the political history they describe so well: what exactly is Christian about the Christian right 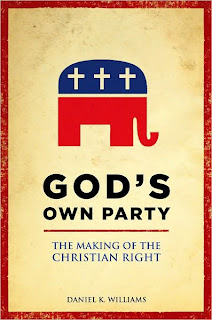 You will remember we have posted extensively about these important new works, and have put up interviews with Williams here and Dochuk here. Noll adds to the discussion with an interesting conclusion reflecting on historians' own moral evaluations. Noll writes: "neither of these writers carries out the moral evaluation, that, especially, in tandem, their volumes make possible," and then a bit further down,
The merger of Jesus and Jefferson that propelled the New Christian Right was neither made in heaven, as in the eyes of its proponents, nor was it a cynical exercise in hypocritical self-interest, as often portrayed by its opponents. It was rather a historically constructed contingency that, judged from a broad Christian perspective, deserves to be both applauded and denounced."
And he concludes:
Theirs [evangelicals'] is not the tradition of Rerum Novarum, Quadragesimo Anno, or Mater et Magistra. It is instead the tradition of Charles G. Finney, who in the 1830s declared that the problem of slavery could be resolved “in three years’ time” if only slaveholders would recognize that slaveholding was a sin. It is the lineage of Billy Sunday, who in 1919 predicted that Prohibition would empty American prisons and transform the country into a heaven on earth.

The flourishing of conservative evangelical politics in recent American history has done considerable good through the exercise of instinct, anger, energy, and zeal. It would have done much more good, and also drawn nearer to the Christianity by which it is named, if it had manifested comparable wisdom, honesty, self-criticism, and discernment.
Email Post
Labels: historians of religion new right regional religious traditions religion and politics religion and scholarship religion in the american west religious conservatism reviews

Tom Van Dyke said…
"...neither of these writers carries out the moral evaluation, that, especially, in tandem, their volumes make possible..."

Is it the historian's job to make such moral evaluations? And by what standard?

Yet neither Williams nor Dochuk addresses directly what should be one of the most compelling questions about the political history they describe so well: what exactly is Christian about the Christian right...

Who decides "what is Christian?" The historian? The theologian? Which theologian? Ratzinger, Barth? Pat Robertson? Jim Wallis?

I realize Mark Noll is becoming the go-to gold standard for religion and history, but where is his theological authority in such matters?

"It would have done much more good, and also drawn nearer to the Christianity by which it is named, if it had manifested comparable wisdom, honesty, self-criticism, and discernment."

Oh? Well, this is theology or contemporary partisan politics or both, but are such judgments the province of the historian? May a historian likewise criticize "social gospel" politics as un-Christian? By what authority?

As for the history of the thing, it seems to me Jesus and "Jefferson" had made peace long before Jefferson was born, in the pre-American Calvinist "resistance theory" that executed one British king and exiled another.

Is Calvinist resistance theory Christian? A theologian might dare say no [and some do, per Romans 13]; however, the historian must say yes, since the British Christians embraced it, as later did the Americans.

If Jesus and "Jefferson" is a theological miscegenation, it was not a uniquely American phenomenon, nor only the province of the 20th century American "right." Further, the historian's job is to report what happened and assess prevailing norms, not substitute his own.
May 29, 2011 at 1:44 PM

foxofbama said…
I've read the Mark Noll Review in the TNR Print issue and the several interviews at this site with Dochuk and Williams.
Couple thoughts. I think the origins of the fundamentalist takeover of the SBC may have roots in the Texas Regulars Movement in Texas as key SBC leader Paul Pressler race history according to Rice's Chandler Davidson and others was a weighty influence for his passion. His associations with Jesse Helms and Gary North are an interesting inflection to the John Birch Society musings of Dochuk in your interview with him.
Key to understanding this--I have left a voice message on Mark Noll's service at Notre Dame--is the 1948 US Senate Race in Texas between LBJ and Coke Stevenson. A circa 94 New Republic article by Sidney Blumenthal corrects Robert Caro's interpretation of the significance of that event.
For all the majesty of these two books, as well as Noll's review, more attention to the specific religious political pilgrimage of SBC's Judge Paul Pressler may yet be needed.
One current discussion is the difference between Charles Pickering's Allied Defense Fund and Bill Moyers Baptist Joint Committee.
Easily this history continues to have significant national repercussions.
June 3, 2011 at 9:27 AM