BY MICHAEL PASQUIER
Josh Paddison, American Council of Learned Societies New Faculty Fellow at Indiana University, is an historian of religion in the American West. His manuscript, "American Heathens: Religion, Race, and Reconstruction in California," will be published by the University of California Press in the not-too-distant future. He is also the editor of A World Transformed: Firsthand Accounts of California before the Gold Rush (1999).
Like all scholars (I hope), Paddison does more than read, write, and teach. He also draws comics, in this case for the blog Occasional Religion, which serves as a kind of forum for "scholars and artists engaging the world." Paddison's latest installment in the series "Moments in U.S. Religious History" recounts a play performed by three Chinese immigrants at the Methodist Mission in San Francisco. You can see/read it here. In an earlier comic strip, Paddison portrays an 1859 interview between Horace Greeley and Brigham Young. 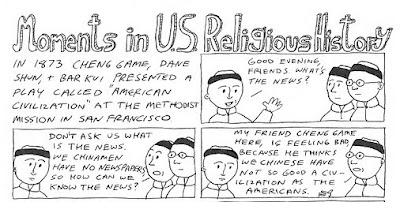