While completing my manuscript on race and music in multiracial churches (more on that at a later time), I've had opportunity to focus on some intriguing contemporary developments among Evangelicals which has drawn the attention of a few people across disciplinary lines. As an outgrowth of this research, and thanks to a wonderful invitation from philosopher Jack Caputo, I spent much of last week at Syracuse University participating in The Future of the Continental Philosophy of Religion conference.
The conference in Syracuse was quite an event, a gathering of around 300 philosophers from the US and UK who specialize in distinctive readings of Hegel, Kierkegaard, Merleau-Ponty, Derrida, Deleuze and the like along with more recent thinkers like Zizek and Meillassoux (you can check out the conference program). I was pleased to hear Catherine Malabou, Thomas Altizer, and Merold Westphol interacting in sessions. With Harvey Cox, Clayton Crockett, and Philip Goodchild in the mix, it was really quite an occasion.
I was invited to present in a session on Peter Rollins, what I called "the phenomenon of Peter Rollins," as a means to explore one development in the Continental Philosophy of Religion. When I was invited to present, my response to Jack Caputo was something like,"You realize I'm a sociologist and not a philosopher, right?" They were quite willing to introduce a multi-disciplinary dialogue that described not only with the ideas of Peter Rollins but what he may represent as actions and movements in our broader religious context. With thirty minutes to share, I tried to unpack my best understanding of how Peter Rollins lies along a long path of renegotiating conservative Christianity that has been brewing for almost two decades. 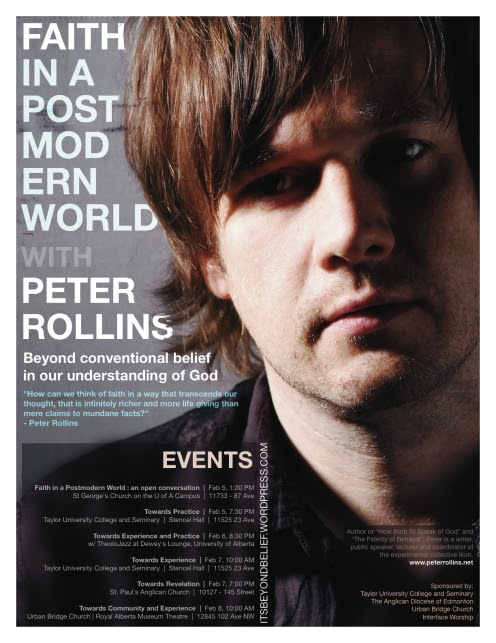 Most of us know that the spectacular success of Evangelicalism in the 1970s through the 1990s created a self-sustaining Evangelical world—and that these successes created a backlash. Evangelical leaders came to seek ways to overcome the churched/non-churched divide. But the journey hasn’t been smooth.
As Evangelicals became attentive to creating a closed “Christian culture,” many disaffected evangelicals left their churches, becoming critics rather than compliant members. Listening to criticism from outside, atheistic thinkers resourced their critique. There emerged a number of Christian readers of secular philosophy who were pleased to take up an aggressive questioning of the certainty, “truth,” and the resulting morality and politics that came with it. Much of the underlying tone of such criticism draws on a hermeneutics of suspicion with its post-Marx, post-Nietzsche, and post-Freud sensibilities. Notions and paradigms promoted by these new "Christian" writers and thinkers is buttressed and often inspired directly by Continental Philosophy.

Attention to "postmodern thinkers" complimented a broader surge of interest in “postmodern philosophy” among Evangelical seminarians and church leaders. Christian publishers are still catching up to this hunger, producing more books building on recent philosophical work (e.g., Philosophy and Theology series from Continuum / T&T Clark and Church and Postmodern Culture series from Baker Publishing Group). In practice, a growing number of evangelical church leaders are moving from simple “Bible Study” to openly engaging Continental Philosophy through their books and concepts in small gatherings. On my twitter feed yesterday, I mentioned Gianni Vattimo's work, and that initiated a stream of follow-up discussions with fellow tweeps who pay attention to theology and religion.
This engagement with such deeply intellectual work represents a significant shift. Mark Noll in his Scandal of the Evangelical Mind articulated the historical basis for anti-intellectualism among Ameircan Evangelicals. Now we are seeing more educated Evangelicals who are finding their religious frameworks “lag” behind the theoretical or epistemological/ontological sophistication of their schooling. They have fundamental critiques of what they see as “modern” ways of reading the bible (hermeneutics), organizing the church (ecclesiology), and assessing morality and devotion (spiritual formation) and are forming new types of Christian gatherings to express their developing values.
Continental philosophy "works" because it involves thinkers whose work invokes a sustained social critique. Continental philosophy is concerned with structures, underlying structures of society (often drawn from Marxist orientations) and underlying structures of the psyche (often drawn from Freudian orientations). A pursuit of uncovering the working of underlying, non-conscious, structures, cultivates observations that eventually can move to practical efforts in what to talk to people about (preaching), what humans are to become (evangelism and discipleship), how community is to be lived together (ecclesiology and “loving one’s neighbor”), and how to act in the world (duty to God and others). These writings provide resources for being prophetic to the church and to the world.

These intra-Evangelical critics have been helped by the “religious turn” in Continental Philosophy and the greater availability of religious thinkers in this vein as primary and secondary works were made more available at the same time as the disaffection and pursuit of alternative frameworks happened among evangelicals. This includes writings from and about Jacques Derrida, Jurgen Habermas, Rene Girard, Jon-Luc Marion, Emmanual Levinas, Paul Ricoeur, Jean-Luc Nancy -- Slavoj Žižek,, Giorgio Agamben, Alain Badiou, Gianni Vattimo). Jack Caputos’s appropriation of Derrida, Levinas’s rejection of Heidegger, Marion’s religious reinterpretation of phenemenologists, and more emerge amidst this re-thinking, aggressively incorporating insights from philosophers who engage in distinctive readings of Hegel, Kierkegaard, Marx, Freud, Husserl, and Heidegger.

In the conference, I dared to raise Peter Rollins to a more significant level by placing him in a broader socio-historical context. Trained in post-structural philosophy, with a PhD from Queens University in Northern Ireland, Rollins intellectually stimulating style of speaking, writing, and consulting fits efforts to flesh out Christianity in new ways that are sensitive to societal shifts and emerging sensibilities. In other words, the happenings around his person are a manifestation of changes across mainstream Christianity. So while Peter Rollins is an interesting person in and of himself, I moved away from assuming that compelling ideas from a single, charismatic leader initiates social change. Instead, Peter Rollins unique “ministry” (which I place in quotes) is an interesting and timely development of American Christianity that finds resonance in the cumulative contradictions of modern Evangelicalism.

Overall, I suspect that Continental Philosophy is underpinning a profound reworking of theological questions including what is the church (ecclesiology), what it means to be human (anthropology), and how life is to be lived (ethics) -- at least for a significant segment of American Christians. Peter Rollins’s appropriation of Continental Philosophy fuels provocative practices in the form of preaching and new types of groups among those who resonate with his message. And it’s the practice of new religious gatherings (like "Pub Churches") that especially attracts the interest of this sociologist. If anyone can contribute any insight or corrections on this, I'm happy to interact on it.
Email Post
Labels: culture wars evangelcalism gerardo's posts sociology of religion theology

Anonymous said…
Great post. I am currently finishing up my undergraduate thesis on a similar topic, focusing on Rob Bell's book Velvet Elvis (although I discuss Rollins a bit as well.) I think you're right to say, "Now we are seeing more educated Evangelicals who are finding their religious frameworks 'lag' behind the theoretical or epistemological/ontological sophistication of their schooling." It seems that much of the appeal of many "emerging church" folks is that they can combat the tradition of evangelical anti-intellectualism while still--and this is especially he case with Bell, I think--remaining in many ways characteristically evangelical.

A lot more needs to be done by academics to understand people like Rollins and Bell, from sociological, philosophical, and even historical perspectives. "As Evangelicals became attentive to creating a closed 'Christian culture,' many disaffected evangelicals left their churches, becoming critics rather than compliant members." Now, many of them are back in churches (or pubs), and they're reading Rollins; they're also creating a growing and important, yet very understudied group.

Anonymous said…
Gerardo,
Much of this is rather new to me and definitely outside of my specialty, though I found your discussion quite interesting and informative. I have, though, observed and followed from afar some of the changes you chart within evangelicalism.

Gerardo Marti said…
Charlie, Curtis, Paul -- thanks to all of you. It's part of a somewhat ambitious project to connect philosophical developments to contemporary Evangelical reframings and new congregational forms. How it might get into print I'm not yet sure, but happy to see affirmation that these dynamics have some "face validity"!
April 16, 2011 at 1:51 PM

bethany said…
One place to look for this engagement happening directly is the Church in Postmodern Culture series from Baker, which has Christian scholars, including Caputo, writing about continental philosophy to a non-expert audience.
I think a more philosophically sophisticated version of Brian McLaren's "postmodern church" thesis is worth having, but the more I consider, the more complex it becomes, to be sure.
April 16, 2011 at 5:53 PM

Anonymous said…
I think this engagement with Continental Philosophy can also be approached from the other side of the coin with Al Mohler, president at SBTS.