2011 is proving to be a challenging year for organized labor in America and yet also a year full of banner anniversaries. Just over a month ago I blogged about the 100th anniversary of the Triangle Shirtwaist Fire. This weekend, meanwhile, Chicagoans will mark the 125th a 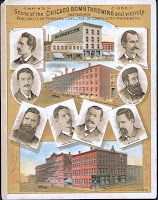 nniversary of the notorious Haymarket Affair, which transpired at Randolph and Des Plaines Streets on 4 May 1886. The tragedy that unfolded that night had dramatic ramifications for the American labor movement, spelling the doom, of course, of the Knights of Labor. It had profound reverberations in the world of the religious elite as well, fueling Protestant nativism and a joint Protestant/Catholic backlash against anything that remotely hinted of radicalism. All this is well-attested in the literature. But we know much less about the religious dimensions of the Great Upheaval. The years prior to 1886 saw not only a dramatic spike in the incidents of strikes but also in working-class criticism of the churches, which wage earners perceived to be moving ever more into solidarity with capital. In

late-nineteenth-century Chicago, notably, the working classes' critiques were often framed not in materialistic but rather distinctly Christian categories: Jesus was a carpenter and "the laborer is worthy of his hire" were two frequent refrains. More on this at some point soon, but in the meantime, here's an interesting NY Times article that discusses the anniversary in light of current controversies; and also a list of events that the Illinois Labor History society is sponsoring to commemorate the occasion, including Saturday's reenactment and re-dedication of the Haymarket monument in Forest Park, IL. If you know of other events in your area, please feel free to share in the comments section. Finally, for those who don't know about the excellent teaching resources available via the Chicago History Museum website, both the digital collection and Dramas of Haymarket are well worth a look.
Email Post
Labels: Heath's posts religion and class religion and labor religion and politics