What Does This Map Tell Us?

The other day in my Religion and American Culture class we were covering mid-19th century America. I've found that asking questions about maps and looking at the demographics of the religious landscape can be a helpful in-class exercise. This map of Major Communal Experiments before 1860 comes from the old Mapcentral site, Bedford/St. Martin's. (Click to enlarge.) 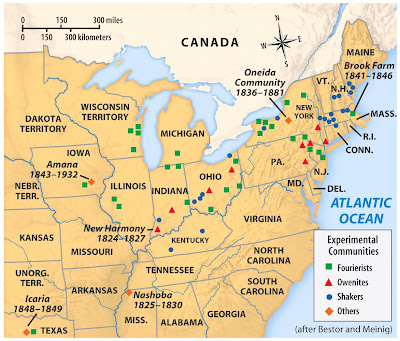 (Students should not get the idea that every American sold his/her possessions, took up with the Shakers, and renounced sex. But still there certainly was quite a bit of communal/utopian action.) After we look at the above in class we ask: What accounts for the heavy presence in the North and the absence in the South? Why did utopian experiments thrive in this age? How did these influence society?

Some selected quotes might provide interesting context to the map and give the students something to ponder. (The two I cite here are not exactly representative, but could get the conversation rolling.) See, Ralph Waldo Emerson, who famously rhapsodized to his friend Thomas Carlyle in 1840:

We are all a little wild here with numberless projects of social reform. Not a reading man but has a draft of a new Community in his waistcoat pocket. 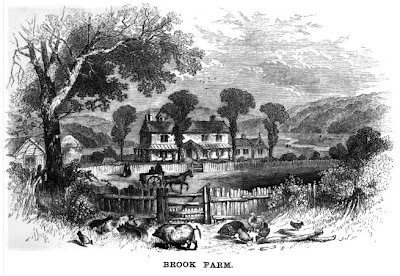 I am gently mad myself, and am resolved to live cleanly. George Ripley is talking up a colony of agriculturists and scholars, with whom he threatens to take the field and the book.1 One man renounces the use of animal food; and another of coin; and another of domestic hired service; and another of the State; and on the whole we have a commendable share of reason and hope.
From the southern end, have a look at James Henley Thornwell, or George Fitzhugh, who wrote this in Cannibals All! or Slaves without Masters (1857):

Alison said…
Randall--thanks for great post and the website tip. I love to use maps in class, but don't always find just what I want. I wish I'd had the one you just posted when we did Kingdom of Matthias and threw in some Shakers, Oneida, etc. last week.
February 21, 2011 at 8:42 AM

Randall said…
Alison: I'll be covering Kingdom of Matthias in a few weeks in my early republic, antebellum course. Love to use it. Discussion always goes well.

BTW, there should be a resource site for all sorts of American religious history maps.

I've used that really terrific book in the Routledge maps series: Brett E. Carroll, The Routledge Historical Atlas of Religion in America. The maps in it look better and are more diverse than the ones in the large Gaustad reference volume.
February 21, 2011 at 9:44 AM

Christopher said…
As I've been reading for comps, I've become increasingly interested in the design, function, and effectiveness of maps in illustrating various points and have thought a bit about using them in teaching as well. Thanks for the post, Randall.

Anyone else find it odd that Mormon communities in Missouri and Ohio aren't included on this map?
February 21, 2011 at 6:57 PM

Janine Giordano Drake said…
Thank you SO much for this and the reference, Randall. I've been looking for something like this for the last four or five months.
February 22, 2011 at 4:42 PM