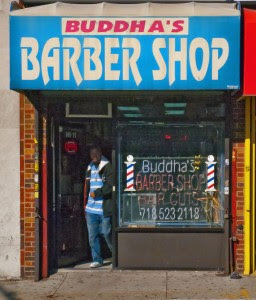 Paul Harvey
Just a brief pointer to an interesting looking site, which I've just looked at briefly: "A Journey Through NYC Religions." In "exploring the postsecular city," they invite you to "join us as we travel down all 6,374.9 miles of our city's streets, every alleway and quite a few hallways to map and photograph every religious site and to interview clergy and lay leaders at the sites." Their "About" page describes the philosophy here:
The religious image of modern New York City has gone through three phases. First, many people, including New Yorkers, saw the city as a "Sodom and Gomorrah." In the 1960s the theologian Harvey Cox declared that New York City was "the secular city." Today, it is very hard to say that the city is like the old Sodom and Gomorrah or secular. There is too much civic moral order and too many manifestations of religious interest. We are not yet a New Jerusalem or New Mecca, but we aren't the secular city anymore either. We think that the most fitting characterization of contemporary New York City is "postsecular," a condition somewhere between the secular and sacred cities.
I'm not sure what to make of all of it (hipster but true-believing evangelical seems to be the general motif), but there are some very cool photographs to look at for sure.
Email Post
Labels: blogs crossposts religion in urban america