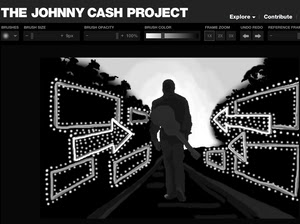 Paul Harvey
"Want to be part of a new Johnny Cash video?" You can.
I had forgotten that Cash's last recording, in his American Recordings series right before his death, was the southern spiritual classic "Ain't No Grave Gonna Hold My Body Down" (sometimes done as "Can Hold My Body Down", or with other variations of same), recorded countless times by just about everybody except the Rolling Stones it seems (Keith Richards not wanting to tempt fate, perhaps). Way back in the last century (summer 1998), I once heard a cover of it, completely unexpectedly, performed by the Tarbox Ramblers at The Burren in Somerville, Massachusetts, one of those magical live musical moments one never forgets. A shout out to the Tufts students smart enough to dance in a frenzy to the Ramblers' uptempo version of the tune.
Today's Morning edition features Chris Milk's Johnny Cash Project, which I was previously unfamiliar with. Milk is virtually stitching together pieces of digital art together with Cash's recording as a posthumous tribute to the man in black (click on the link to the Johnny Cash project to submit your own entry). Just for fun, here's a Youtube tribute along the same lines, the recording together with photograph highlights of Cash's career. A review of the entire last album is here. Johnny lives.
Email Post
Labels: gospel music music religion and popular culture reveries

FYI-- I'm about to post a piece on my website (www.secondcousincurly.com) that features a version of "Ain't No Grave."

Seems like you and I are both in the Boston area. Keep up the good work and stay warm!