One of the joys of developing an interest in Mormon History is that there always seems to be a historic site to visit. AHA in ? The Mormon Battalion. In ? Joseph Smith's birthplace. And obviously lots to do in western , , , , and . For the details, see this list.

With a family, this surfeit can potentially be tricky to navigate, despite the family-friendly nature of the church. I've yet to persuade my wife that driving the length of the Mormon Trail would be a good use of our time and money -- perhaps we can just make a beeline to the Handcart Visitors' Center next summer. 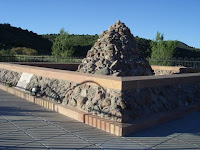 My two-year-old daughter has had a mixed reaction to Mormon Historical Sites. Loved the stairwells at 's Beehive House. Screamed when subjected to a discourse on the history of the church at the Brigham Young summer home. Enjoyed collecting rocks at the site of the Mountain Meadows Massacre (note: a site currently maintained by the church but not a "Mormon Historic Site") (second note: said daughter did not remove any rocks from the monument itself).

I'd long wanted to visit the massacre site, given the attention the massacre has received from historians over the past decade. It was strange to see the bucolic landscape surrounding the site, and it was hard to perceive the macabre given the pleasure of leaving boiling-hot St. George for a cooler and greener spot.

At the end of the summer, we drove from , to visit some friends in . (No time for Mormon tourism in this year, but the Joseph Smith Family Farm and Sacred Grove were good stops last year). Somewhere near the NY-Vermont border on Rt. 4, we sped by the William Miller Chapel. In terms of signage and web presence, the Adventist Heritage Ministry lags way behind Mormon Historical Sites. I didn't think I could divert us for Miller this year. Perhaps next time. (I'd like to get a look at Ascension Rock).

Somewhat disappointed to have missed Miller's Chapel (but disappointment of course is relative in this case), I also regretted that our route to South Royalton, Vermont did not more closely approach Brigham Young's birthplace. However, I had forgotten that Joseph Smith was born in . Our obliging hosts not only informed us of the birthplace and volunteered to take us the next day but also pulled out Hope Nash's 1975 Royalton Vermont.

A choice description from Nash of a religious minority making itself more acceptable to the mainstream:

...the Mormons, after raising the Joseph Smith monument in 1905, built a cottage, a reception center for visitors. In the 1920s they were fitting into the local scene with a dairy herd, sugaring operations, and an apple orchard. They made friends by inviting everyone to picnics, games, dancing, and programs of music and drama (p. 80) [Continued in a footnote on that page] The Mormons made themselves pleasant. They gave parties and pleased the children. When a little girl went up there they had a big box of candy on a high shelf and they lifted her way up so she could look down into it and choose ... In 1970 Mrs. Roland McIntosh said, "Now there is only one person on Dairy Hill who doesn't like the Mormons." She did not say who it was.

The JS birthplace was much better marked than the Miller Chapel. One only had to find . All of our children loved the birthplace, so there must be something to Nash's analysis. I did find it a bit ironic that they received miniature American flags from the missionaries.

I think at this point my wife feared that Mormon Historical Sites would haunt her wherever we went. [None in the Southeast, though, at least until Patrick Mason's forthcoming book on anti-Mormon violence in the American South gets the ball rolling].

I did actually spend some time in the archives this summer, but one of the things I appreciate about the field of Mormon History is the passion with which Mormons (as well as ex-Mormons, anti-Mormons, and the curious) engage their history. What other church in the would invest so much time and money to promote the study of its past? There are both theological and historical reasons for this, but for outsiders like me, it is encouraging to spend my time studying something that is critically important to so many people.

Of course, the Mormons are not the only group to have cultivated a strong sense of their history. I recently read and reviewed Laurie Maffly-Kipp's recent Setting Down the Sacred Past, in which African American Protestants rejected the belief that they were a people without a history. In the process of discovering and refashioning a collective past, they became African Americans. A short paraphrase of Maffly-Kipp's conclusion:

The knowledge of a glorious past, the example of black and white heroes of the faith, and the anticipation of a millennial future enabled black Protestants to respond to the bitter disappointments of the Civil War's aftermath with efforts to shape a more just society either in the or abroad. In their books and speeches, the "point of history is to rise above ourselves and this world to an unmoving vantage point."

After spending another summer studying Mormon History and reading Setting Down the Sacred Past, it struck me that my own denomination (the dwindling PC(USA)) sorely lacks this keen interest in its history. We can't travel around the country visiting historic sites, we don't really have a pantheon of Presbyterian heroes, and most of us probably don't know what the word Reformed means in a Presbyterian context. I think historical forgetfulness impoverishes mainline Protestantism. We're not sure where we came from, and we don't have any idea where we're going. I don't think most mainline Protestants would want "an unmoving vantage point," and Maffly-Kipp doesn't argue that African Americans or other religious groups should re-embrace the historical or theological thought of her subjects. But whether Mormon, mainline or evangelical, white or black, there are distinct advantage to cultivating a sense of a shared sacred past.

Anonymous said…
Well, if Arkansas's the southeast, then you can count Parley P. Pratt's grave north of Alma off of I-540 as a Church-maintained historic site.
September 10, 2010 at 9:55 AM