[Emily Clark is a Ph.D. Student in the Department of Religion at Florida State University. She is also the new managing editor of the Journal of Southern Religion. You can expect great things from Emily in the not-too-distant future!]
Five Years and an Oil Spill Later
Emily Clark
This upcoming Sunday marks the 5 year anniversary of Hurricane Katrina’s landfall on the American gulf coast. The aftermath of the storm–the outrage, the rising death toll, the fundraising, the widespread donations of time and money to rebuild, and the levee investigations–largely languished in the national media as time passed. Interest would perk up again when Brad Pitt finished another house, and with the recent interest in the HBO show Tremé, the public eye will incline towards the Crescent City that Care Forgot in the approaching days. 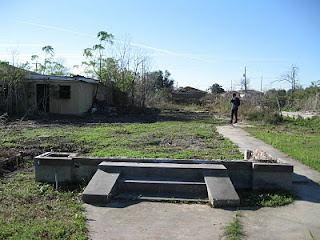 In addition to its Tremé style jazz, New Orleans is also famous for its historical haunting and ghost stories. A former New Orleans resident–the folk artist, musician, and street preacher Sister Gertrude Morgan who died in 1980–remains today in the city she evangelized in a ghostly form. According to sociologist Avery Gordon, “to write stories concerning exclusions and invisibilities is to write ghost stories,” and the scholar’s investigation of these social ghosts leads “to that dense site where history and subjectivity make social life.” As the floodwaters receded from the Lower Ninth Ward (her former neighborhood), they resurrected a Sister Gertrude Morgan specter. Created and propagated largely by current Preservation Hall owner and creative director Benjamin Jaffe, the spectral Gertrude Morgan exists in a specific cultural context: post-Katrina New Orleans. Jaffe’s initial uncertainty about staying in his hometown and the city’s subsequent rebuilding efforts, particularly his artistic contribution to the city’s cultural revival, swirl about his spectral evangelist. For him, she became a symbol for the enduring love, acceptance, and creativity he reveres about his beloved city. She is an icon for authentic New Orleans culture in the post-Katrina world–a symbol for the city she viewed as sinful and most in need of her didactic message (click here for more on Morgan and Katrina). 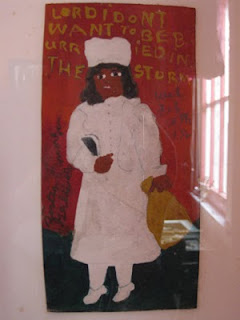 In 2009, the Journal of Southern Religion released two issues of its typically annual periodical. One of these installments was a special issue entitled “After the Storm,” an exposé on religion in the American South in light of and responding to Katrina. Including articles, poetry, and the visual arts, this particular edition of JSR demonstrated, in the words of guest co-editor Tracy Fessenden, that “New Orleans isn’t going away.” The editors of the JSR encourage you to revisit or explore for the first time this special issue. Five years after the storm and one oil disaster later, religion in the gulf continues to raise difficult questions about power, identity, and social forces. Not only that, the South furthermore remains key to our constantly-developing and ever-nuancing picture of American religion.
Email Post
Labels: guest posts Journal of Southern Religion katrina religion and popular culture

Randall said…
Emily: Thanks for the piece on the Katrina anniversary and the JSR issue that Mike and Tracy did so well.

The disaster seems like it all happened ages ago. But it really was recent. Still has enormous lingering effects.
August 26, 2010 at 7:54 PM