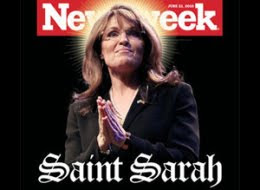 Kelly Baker
Sarah Palin graces the cover of Newsweek this week with the moniker, "Saint Sarah." Bill O'Reilly interviewed the author of the piece, Lisa Miller, to discern whether Newsweek was mocking Palin or not. The National Catholic Register claims that Miller caricatures Christianity. When I first bumped against Miller's article on the supposed sainthood or prophet-like status of Palin to pro-life women a day or so ago, it bothered me but at first I wasn't sure why. Now, I don't care if Palin is a saint or not, and I have attempted thus far to NOT write about her. Partially, this is because everyone writes about her, and some are much, much better than my analysis would be (see our own John Fea on Palin--here and here). She is lauded and vilified. And Fea and (Tina) Fey seem to have it covered.
Thus, my issue with Miller's piece and the photo gallery of Palin products and fans, entitled "The Cult of Palin," is not about sainthood, consumption or even how Palin is represented. My problem is how Miller suggests that Palin signals that the Christian Right is now a women's movement because there is one lone celebritized female figurehead. Palin is popular among pro-life women but I am not sure that this means that she is the leader of the newer Christian Right. Miller showcases "Saint Sarah" as an approachable, human character, who described taking a pregnancy test, her pregnancy and the birth of Trig in her memoir, Going Rogue. Sure, I can buy how this message complements pro-life stances that have cultural currency with pro-life Christian women. Heck, I can even see why discussions of pregnancy tests and unexpected pregnancies make Palin more human. Miller writes:
Palin has been antagonizing women on the left of late by describing herself as a “feminist,” a word she uses to mean the righteous, Mama Bear anger that wells up when one of her children is attacked in the press or her values are brought into question. But while leftist critics continue to shred Palin as a cynical, shallow, ill-informed opportunist, and new polls show her unpopularity rating to be at an all-time high—53 percent—Palin is now playing to her strengths. Even if she never again seeks elected office, her pro-woman rallying cry, articulated in the evangelical vernacular, together with the potent pro-life example of her own family, puts Palin in a position to reshape and reinvigorate the religious right, one of the most powerful forces in American politics. The Christian right is now poised to become a women’s movement—and Sarah Palin is its earthy Jerry Falwell.
Miller continues that other women leaders of the so-called Christian Right were not role models like Palin. Women want to be Palin but not Phyllis Schafly, I guess. Moreover, Palin's "generic theology" and focus on motherhood appeals to women who already have a stake in the Christian Right. Sarah Posner takes on Miller's discussion of Palin's ascension over at Religion Dispatches. She notes:

In some ways, the Christian right has always been a movement about women -- about what their role is in the family, in the church, and in the culture. That doesn't make it a women's movement, and that doesn't make Palin its leader. The movement's original sin, if you will, is that it is entirely predicated on the idea that America is a Christian nation and must be guided by biblical principles. And those biblical principles, as defined by the Christian right, preclude things like women's free agency -- choosing when and if to have children, choosing to enter ministry, choosing not to submit to her husband's spiritual authority, or choosing not to get married and have children at all.... But while Palin's not a feminist, she is a lightning rod for evangelical and Pentecostal women, because she gave them a fearless -- fearless in that she was unafraid so say whatever nonsensical thought popped into her head -- leader on the national stage.

I agree with Posner's assessment of the place of women in the Christian Right, but I want and need more historical context from both of these pieces. The debate over Palin's feminism strikes me as an older debate, as Posner notes, about the place of women in more conservative political and religious movements. How could women be feminists in movements that clearly don't seem to have their best interests at heart?! (Marie Griffith's God's Daughters is the best on this ambiguity, and Miller uses Griffith in her article.) The rhetorical move to include motherhood as the claim for political and religious authority is not new. In his White Protestant Nation (2008), Alan Lichtman labels this as "conservative maternalism" in which women affirm the "inherent differences between the sexes and women's special role in rearing children as healthy, moral, and productive citizens" (p. 19). Lichtman is not the first to note how this maternalism functions but I really like the label and his ability to show how this maternalist ideology and its embrace by conservatives can be traced to the 1920s (and likely before though Lichtman begins in the 1920s). (See also Burlein's Lift High the Cross, for a more theoretical approach to the gender ideology of the Christian Right, and Blee's Women of the Klan, for a full discussion of how Klanswomen used maternalist strategies).

Palin, thus, melds personal experience and political authority in a way that other conservative women have, which does not make her a replacement for Jerry Falwell. Rather, this makes her complementary to larger political and religious agendas of the Christian Right not a trailblazer. She affirms what this movement already believes about gender and provides a role model for the women that attend her speeches and pay for plates at fundraisers. Moreover, Palin's disapproval rating might be high, but she has a dedicated fan base that sport bumper stickers, t-shirts, her particular brand of glasses and buy her book and slots at fundraisers. Her celebrity does not signal a new spiritual mission of the Christian Right rather she just showcases the status quo in a flashier fashion.

David said…
What's wrong with mocking someone who is a narcissistic, hypocritical liar?
June 18, 2010 at 3:09 PM

Kelly J. Baker said…
Darren, it seems that Newsweek can't make up their collective mind. Also, I find nothing wrong with mocking though it is funny that O'Reilly gets so up in arms about it.
June 18, 2010 at 3:50 PM