Skip to main content
Labels
Posted by Art Remillard May 24, 2010

Lost in Thought About Lost

Art Remillard
(Warning: Lost spoiler alert!)
Yesterday, Lost resolved six seasons of mystery not by bluntly revealing every secret, but by emphasizing that the road to individual redemption passes through a community. In a Flannery O'Connor-esque manner, many of the characters reached this point of enlightenment only when facing death. In transcending their own interests, characters made individual sacrifices for the common good. I think there's something to this O'Connor connection, since in a previous season we saw one character reading Everything that Rises Must Converge.
Anyway, the finale concluded with a mawkish family reunion, bearing all of the traces of a heavenly scene, but avoiding heavy-handed theological prescriptions. (So will Newsweek's Lisa Miller's Heaven will get a post-Lost boost?) While I went to bed ambivalent about this scene, I awoke thinking otherwise. The writers left us with an emblem of Lost's central theme: "live together, or die alone." Yes, they were literally dead, but they were metaphorically reborn through their bonds of friendship.

At first, I was tempted to see Lost as a jab at Jean-Paul Sartre--"Hell is other people." There's no lack of philosophy in the show. But I learned that Sartre had something else in mind when he wrote this, something very Lost-ish. 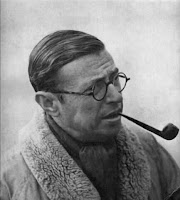 "Hell is other people" has always been misunderstood. It has been thought that what I meant by that was that our relations with other people are always poisoned, that they are invariably hellish relations. But what I really mean is something totally different. I mean that if relations with someone else are twisted, vitiated, then that other person can only be hell. Why? Because . . . when we think about ourselves, when we try to know ourselves, . . .we use the knowledge of us which other people already have. We judge ourselves with the means other people have and have given us for judging ourselves. Into whatever I say about myself someone else’s judgment always enters. Into whatever I feel within myself someone else’s judgment enters. . . . But that does not at all mean that one cannot have relations with other people. It simply brings out the capital importance of all other people for each one of us.
Sartre and Lost almost have a similar message. The relationship between the individual and community is hard work and sometimes hellish. But it's also necessary and fundamental to life. More than any show that I've seen, Lost captures this message.

One final note... I've spent far too much time this morning thinking and reading about Lost. By far, the most insightful analysis I've seen comes from S. Brent Plate over at Religion Dispatches. It is worth reading even if you know little about the show. He concludes, "The greatest fiction of Lost is the apocalyptic tale that we are individuals, that it is survival of the fittest. Lost then, is the antithesis of Lord of the Flies, but also of the so-called reality television shows that extol the individual 'dancers,' 'idols,' and 'survivors.' Those are the real fictions. Lost reveals itself as reality."
Email Post
Labels: art's posts religion and film/television religion and popular culture

Anonymous said…
Art,
Thanks for a great post. Though it's officially outside my field of interest, I love to examine the connection between pop culture and religion.

I've been mulling the idea for a while of Lost being sort of TV's ultimate expression of twenty-first century pluralism: not just in its subordination of the individual to the community (demonstrated quite beautifully in the finale's final five minutes) but insofar as the show itself has been interpreted through a variety of (particularly religious) lenses. For instance, plenty of folks are interested in making from it some kind of Christian allegory; at the same time, over at Jezebel, the finale is being dissected in light of the Tibetan Buddhist concept of bardos. The range of interpretive strategies is a credit to the writers, I think.

I appreciated your Flannery O'Connor connection, too. Over the course of this last season of the show, I've thought a couple of times about pulling out my high school copy of "Everything that Rises Must Converge" and re-reading it to determine if there are any cross-themes.
May 25, 2010 at 6:51 AM

Art Remillard said…
I agree on the 21st century pluralism point. One of the show's main attractions for me has been just this. I just wish Mr. Eko could have stayed longer.

It's still too soon, but I can't think of another show that I've enjoyed this much. And what a finale! In contrast, while I REALLY liked Deadwood, they pulled the plug before it could come to a proper close.
May 26, 2010 at 8:14 AM