Just back from the Organization of American Historians (OAH), I had planned on doing an extensive post on the excellent panel I saw there, “Rival Revivals,” featuring papers by Alison Greene, Jarod Roll, and Matt Sutton, and with commentary by Kenneth Fones-Wolf and chaired by Lizabeth Cohen. But now I don’t have to, as we have an excellent summary of the panel from the OAH reporting at HNN, with full videos of the presentations and summaries of the papers. I would just say in addition to what is there that the panel featured the interesting twist of having the fundamentalists of the 1930s/1940s (discussed in Matt’s paper) as the northern, educated elites, in comparison to the various folk preachers, Garveyites, and premillennial radicals discussed in Alison and Jarod’s papers, turning the usual stereotypes about recent fundamentalism on its head. 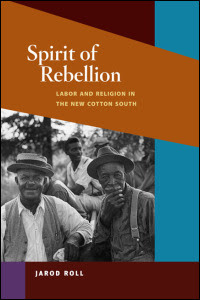 The material in Jarod Roll’s paper came from his book, out any day now (I saw it at the University of Illinois press table at the OAH, but wasn’t between regular hard covers yet), entitled Spirit of Rebellion: Labor and Religion in the Cotton South. A bit more about the work here:

In Spirit of Rebellion, Jarod Roll documents an alternative tradition of American protest by linking working-class political movements to grassroots religious revivals. He reveals how ordinary rural citizens in the South used available resources and their shared faith to defend their agrarian livelihoods amid the political and economic upheaval of the first half of the twentieth century.

On the frontier of the New Cotton South in Missouri’s Bootheel, the relationships between black and white farmers were complicated by racial tensions and bitter competition. Despite these divisions, workers found common ground as dissidents fighting for economic security, decent housing, and basic health, ultimately drawing on the democratic potential of evangelical religion to wage working-class revolts against commodity agriculture and the political forces that buoyed it. Roll convincingly shows how the moral clarity and spiritual vigor these working people found in Pentecostal revivals gave them the courage and fortitude to develop an expansive agenda of workers’ rights by tapping into existing organizations such as the Socialist Party, the Universal Negro Improvement Association, the NAACP, and the interracial Southern Tenant Farmers’ Union.

Yesterday morning I attended an equally excellent panel of a very different sort: “Putting Faith in American Democracy: Remembering Liberal Protestantism in the Twentieth Century,” featuring papers by Mark Edwards, Matthew Hedstrom, and Bryan Peery, and with commentary by Mark Hulsether. Mark discussed Protestant ecumenicism in the post WWII era, emphasizing how it dovetailed with a one-world liberalism rather than a Cold War realism that we associate with Reinhold Niebuhr. Matt’s paper discussed the Protestant liberal influence on the American Library Association, which created a sort of quasi-canon of books to read each year (sort of a well-publicized “top 50” list), one which pushed a reading public towards Protestant liberal thought and thus exerted more influence culturally than we might recognize looking only at the Protestant liberals and politics. Bryan Peery, a graduate student at George Washington, covered the course of Protestant-Catholic dialogue after WW II and the vital influence of Robert McAfee Brown in the same, who held that “dialogue itself was valuable, even if it only led to more dialogue.” Those views competed with an upsurge of anti-Catholicism signaled in Paul Blanshard’s 1949 screed American Freedom and Catholic Power, which compared the Vatican to the Kremlin.

Hulsether called for more appreciation and respect for mid-century liberal Protestants. Often they are interpreted as being powerless -- thus, nowhere -- or as leading the charge for a “secular neutrality” that was just liberal Protestantism in disguise -- and hence, everywhere. He suggested that the Protestant liberals assumed a position sort of like the UN non-aligned movement in distinction to the choosing up of sides going on in the Cold War, and that their vision should be given more respect and credence than is usual in a scholarship which in recent years has made the Protestant liberals the object of target practice.

Politically radical premillennialists, preachers jumping out of airplanes to call attention to the imminent millennium, Garveyite devotees picking up the cause of radicalism in the South, Protestant liberals demanding alternative visions besides those given to them during the Cold War, northern fundamentalists wondering if the “Blue Eagle” of the NRA was the mark of the beast -- who said 20th century Protestants were boring? Actually, I just said that, a few posts ago, about Methodists. My bad.