On Illness Stories and Hospital Beds 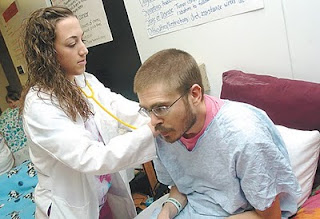 I’m blogging from a bed. It's supposed to look like a hospital bed. More on that later. For now, let’s talk about stories.

Whenever I do research, I’m not looking for sources. I’m looking for stories. Sometimes I find fragments of stories in letters and diaries. Other times I find more detailed stories in memoirs and autobiographies. In any case, since I write religious histories, I want stories that convey a certain essence—something that is reflective, insightful, unique, aesthetically compelling—something that gets to the heart of an issue, event, or idea.

But even when I do find that gem of a story, I worry that I’m just not getting everything. Recall Mike Pasquier’s post on this very point as it related to Hurricane Katrina. “The circumstances just seem too aberrant, too disjointed from ordinary time and space, to capture the religious experiences of the moment,” he laments. “Scholars of religious studies, myself included, tend to use phrases like ‘lived religion’ and ‘extraliturgical religion’ to describe religion outside the carefully scripted confines of ‘official religion’ or ‘institutional religion.’ But these categories seem only to get at the before and after the storm; the now remains elusive.”

Stories of the storm, filtered through memory, will always cast a veil of mystery. Is it even possible, I wonder, to find a “now” perspective? Probably not. But illness stories might come close. In At the Will of the Body, medical sociologist Arthur Frank chronicles his journey through two illnesses, a heart attack and cancer. Religion and storytelling play no small role in his account.

Stories we tell ourselves about what is happening to us are dangerous because they are powerful. Stories come to us from many sources: some we seek, many happen without our notice, others impose themselves on our lives. We have to choose carefully which stories to live with, which to use to answer the question of what is happening to us. Jacob’s wrestling became a story I lived with as part of my personal mythology of illness. This is what it is to be ill: to wrestle through the long night, injured, and if you prevail until the sun rises, to receive a blessing. Through Jacob’s story, illness became an adventure.

Frank elaborates on the significance of stories and spirituality in The Wounded Storyteller and The Renewal of Generosity. He emphasizes how a diagnosis wounds both a person's body and identity. Reconstructing both calls for a new story, one that accounts for the illness and all of its implications. Caregivers can play a significant role in this process, if they are truly caregivers. “I reserve the name ‘caregiver’ for the people who are willing to listen to ill persons and respond to their individual experiences,” he explains in At the Will of the Body.

Is Frank’s illness story—and others like it—“now” enough? “Cancer never disappears,” he affirms. Frank will always live with his illness, and tell his illness story. And this story's religious dimension might influence readers too. As Martin Marty put it in his review, “this short work can transform lives or at least ways of thinking about living.”

This brings me to my faux-hospital bed. It’s Relay for Life time at St. Francis University. Students from my “Narrative Medicine” course decided to set up 3 hospital beds, with 3 volunteers acting as cancer patients for 24 hours. Somehow, I ended up being one of the patients. I've assumed the identity of a 40-year-old brain cancer patient. I'm married, with two kids. I’m also angry, depressed, disoriented, and enveloped in pain. My motor skills are such that the “nurses” have to feed me.

So I have a story. It's a story of humility, mainly. I've ceded my freedom to move, sleep, and eat. It's nothing like the real thing, but maybe I'll leave with an improved sense of empathy. After all, throughout the day and night, survivors have stopped to share their illness stories. The depth and detail has been nothing short of astonishing. Every story resonates with spiritual force, causing me to reflect on the limits of life, and the reality of death.

I'm almost finished now. I have crossed over in to another identity, as well as another discipline, and will be resuming "normalcy" soon. I will bring back new insights. In particular, maybe on my next trip to the archives, I'll pay closer attention to stories of illness. They seem to make the “now” a bit less elusive.
Email Post
Labels: art's posts katrina primary sources religion and health religion and medicine writing history

Anonymous said…
My nurse
There is not a book about health developments united states
April 18, 2010 at 7:06 PM