From the Record Bin: Jewish Folk from the Fabulous 60s

Get out the hand sanitizer. It’s time to rummage through the dusty, moldy, old albums at your local Salvation Army, book store/cat sanctuary, or record shop. When I'm thumbing through LPs by Tijuana Brass, 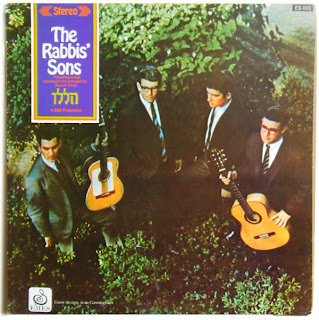 Ray Conniff, Henry Mancini, The Commodores, and Captain & Tennille, I’ll spot the occasional religious album. It might be the bicentennial/patriot/gospel mishmash of the Heritage Singers, hymns rendered for pipe organ lovers who were born before 1920, or the Jesus anthems of the Imperials. Once in a great while, I’ll come across a real gem.

I picked up a copy of the Rabbis' Sons' 1967 folk romp at a used bookstore in Bennington, Vermont. I know next to nothing about beatnik-lite Jewish folk music. So, I’ll let the liner notes and the music itself do the talking/singing. (The notes below remind me of the wordy, awkward prose that fills a typical college yearbook. It doesn't quite capture the beauty of the music.):

With the emergence of the state of Israel, folk songs became the natural vehicle of expression for the renascent spirit of a people bursting with a longing for freedom and 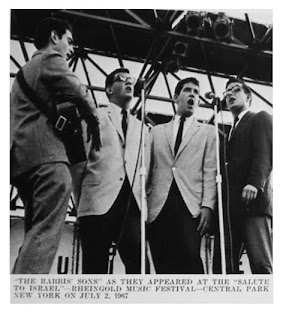 national independence. Songs of faith and thanksgiving were mingled with exultant tones of Jewish heroism to produce a colorful array of melodies that we now know as Israeli folk music.

With this album, however, a new creation in Jewish music makes its debut. It offers an harmomous blend of Jewish liturgical texts with traditional melodic warmth, uniquely set to a modern folk beat--by The Rabbis' Sons. On this LP recording, eleven songs are presented; nine were composed by Baruch Chait, one by Mark Davidowitz, and the last is a stirring revival of a somewhat forgotten Yiddish folk song.

Two guitars and a bass fiddle provide the fundamental instrumention for this complement of musical innovations. The penetrating resonance of a steel guitar is skilfully produced by David Nulman, who assisted in the guitar arrangements. Mickey Lane, as master of the bass fiddle, carries the rhythm with striking artistry.
Email Post
Labels: american judaism from the record bin music randall's posts

Check out Josh Kun's project on Jewish records at: http://trailofourvinylbook.blogspot.com/

Randall said…
Judith: Thanks for posting the link. Have enjoyed listening to some of the tracks on that site.
April 10, 2010 at 3:50 PM

price per head said…
Hilariously cool. I have been looking for sites like this for a long time. Thank you my friend.
June 7, 2012 at 12:40 PM