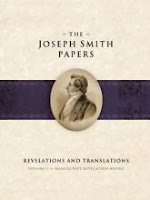 My copy of The Joseph Smith Papers: Revelations and Translations, volume 1, arrived in the mail a few days ago. I could hardly lift it. This is a tome one must heft. No need for a trip to the campus recreation center when one could simply do a few shoulder presses with the latest offering from the Church Historian's Press. Some will balk at the $99 price tag, but per pound it's a much better deal than most trade paperbacks. At the very least, ask your financially strapped university library to purchase these elegant reference volumes.

Revelations 1 is the second volume to emerge from the Joseph Smith Papers project. Last year, the Church released the first volume of the Journals series; the next two volumes will inaugurate the Documents and History series. (I'm looking forward to the latter's presentation of Joseph Smith's accounts of his early religious experiences).

Publishing the contents of two manuscript books, Revelations 1 presents a large majority of those items included in the church's Doctrine & Covenants (alongside the Book of Mormon and the items included in the Pearl of Great Price, a canonical Mormon Scripture). The volume includes a useful introduction, which relates the publication history of the revelations and chronicles the reaction of a November 1831 conference uncertain about the imperfect language employed by Smith's revelations. (An additional revelation helped settle the question and persuaded those elders who were skeptical). The two books also contain nine items not canonized by the church, some of which are not readily accessible elsewhere. Of these, I was struck by the "sample of pure language," discussing the names of God, the "Son," and "man" in the pure, pre-Babel heavenly language. [See Samuel Brown, "Joseph (Smith) in Egypt: Babel, Hieroglyphs, and the Pure Language of Eden," Church History 78 (March 2009): 26-65].

Perhaps most unusual for a documentary project, Revelations 1 features photographic facsimiles of every page of the two manuscript volumes (samples from the JSP website) alongside transcription. The latter include a careful recreation of additions, deletions, etc., color-coded by the scribe who made the changes. (Sometimes as many as seven different scribes amended a revelation). For a more detailed discussion of the changes, see a post by one of the volume editors at By Common Consent. These manuscript books usually represent the earliest extent copy of Joseph Smith's revelations, but they are copy books, not containing a scribe's initial copy (let alone the verbatim words as spoken from the lips of the prophet). The net result is a research treasure trove.

For someone not terribly familiar with Joseph Smith's revelations (I mostly encounter them bit-by-bit as I move through accounts of his life), however, the volume is a bit overwhelming. Should one examine these manuscripts and transcripts before quoting from one of Smith's revelations? Probably a good idea, since the editors have corrected inaccurate dates for several revelations and looking at the textual history might prove worthwhile. The volume simply presents the facsimiles and textual analysis without further annotation and commentary. For the most part, this approach helpfully lets the revelations speak for themselves, but on items like the "sample of pure language" I would have appreciated some guidance. [For the context of the canonical revelations, I would probably start with Steven Harper's recent Making Sense of the Doctrine & Covenants].

Alongside Royal Skousen's "earliest text" of the Book of Mormon, Revelations 1 heralds the arrival of mass-marketed advanced textual studies of Mormon scriptures. Reviewing Skousen's production for the Wall Street Journal, Stephen Prothero commented that "we probably know more about the production of the Book of Mormon, which is holy writ to the world's 14 million Mormons, than we do about any other scripture." Now we know at least as much about the composition and evolution of the bulk of Joseph Smith's written revelations. The full-size color facsimiles and the eye-popping sales for the first volume of the Joseph Smith Papers (upwards of 20,000 -- UPDATE: perhaps upwards of 50,000) testify to what Prothero termed the "seductive power that scripture has over human beings" and the appetite for both historical and scriptural study among contemporary Latter-day Saints.

I sometimes wonder whether this current explosion of careful textual study and recreation of the earliest Mormon scriptures says about the place of revelation in today's Church of Jesus Christ of Latter-day Saints. Even though the Church's last canonical revelation was received in 1978, Mormons certainly have not abandoned their belief in ongoing revelation.

Brigham Young once commented that he "would not give the ashes of a rye straw for these three books [The Bible, Book of Mormon, and Doctrine & Covenants] so far as they are efficacious for the salvation of any man that lives, without the living oracles of God." While Young quoted from and regularly alluded to the Bible and the Book of Mormon, he also characterized his own discourses as "scripture." Perhaps others can clarify this point for me, but very superficially it seems that while Mormons of Brigham Young's day honored and used the church's Scriptures, they are treated with more reverence today, symbolized not only by their use in Sunday School lessons but also by Revelations 1 and Skousen's BOM textual work. At the same time, most Mormons still revere their "living oracles," but I don't recall Presidents Hinkley and Monson presenting their sermons as "scripture."

At a time when most university presses are cutting back on documentary editing projects or publishing such editions online, the Joseph Smith Papers project represents a welcome and most unusual success. Now that the second volume has appeared, I'm much more optimistic I'll live to see the remainder published. The Mormons have been known for bold and audacious plans since the religion's first years, but as much as I'd love to utilize a Brigham Young Papers project, I trust they have enough sense not to try to scale that Everest.
Email Post
Labels: Joseph Smith Mormonism new books turner's posts

J. Stapley said…
Nice write-up, John. I agree, this is pretty spectacular publication. I think the Documents volumes are where the Revelations will be more accessible. There they will have individual introductions and contextualization. However, they will be split up chronologically-interspersed with other docs, and presented without later editing. Having the cohesive manuscript volumes presented as they are is, as you note, a very rich source.

Also, I think I read recently that the sales for Journals 1 has topped 50,000.

There is a fair amount of modern rhetoric among Mormons about the scriptural nature of Church leader sermons; but that categorization is ultimately fleeting. The canonized texts have tremendously more weight. I think in the early day of Joseph Smith and then Brigham Young, there was enough innovation and dynamism that older scripture wasn't as carefully considered.
October 27, 2009 at 9:22 AM

B. said…
The link below is an Ezra Taft Benson address where he talks about the relative importance of living vs. past prophets. His 3rd point is the most relevant to your query about living oracles.

Mark Ashurst-McGee said…
Thanks for the review John. J. Stapley is correct that in the forthcoming Documents series the revelations will be individually introduced as texts in their own right and will be contextualized. In Revelations vol. 1 the texts are the two manuscript revelations books, which are introduced and contextualized in their totality (see pp. 2-7, 406-410).

I'm currently helping to finish up volume 1 of the History series, so I was interested in your comment that you're "looking forward to the [volume's] presentation of Joseph Smith's accounts of his early religious experiences." The volume does include the documents with the most significant accounts of the early visions, but not all of them--only the ones by JS and his assigned historians. Several other accounts by Mormons and others should be taken into account when analyzing the events on their own terms. As you probably know, these early visions have been the subject of close scrutiny by many over the years. In the Joseph Smith Papers, we have attempted to provide helpful contextual annotation, but not necessarily more than we provide for any subject in Smith's papers. Instead of annotating that which we find most interesting, we try to let the text speak for itself. Why was what was written down written down? We try to let the document lead the way when it comes to research avenues and resulting annotation. We're trying to present the documents as best we can, and we will leave it to historians and other scholars to use the documents as resources for whatever subject they wish to pursue--whether it be the "First Vision", the social position of the Smith family during the time, or the material culture of New York farmers. That being said, I think that History volume 1 makes a valuable contribution to understanding the early visions--not through its (re)publication of the vision narratives and not necessarily through its routine annotation of the relevant passages, but through the historical introductions to the relevant documents. A result of deep textual and contextual study, these historical introductions will be pathbreaking analyses of these foundational documents that will set them in a new light--one with implications for reading the vision narratives.

Oops, I got a little carried away there. Anyway, thanks for your interest. I hope the Joseph Smith Papers can serve you and other scholars well. The ultimate purpose of the Smith edition is to facilitate more and better scholarship on Smith and early Mormonism.
October 28, 2009 at 2:55 PM

John G. Turner said…
Thanks, Stapley, B., and Mark.

I didn't realize the documents series would includes the revelations with contextualization. I will look forward to it.

While the accounts in the History series won't serve as an exhaustive analysis of the "First Vision," etc. (I enjoy the account of Joseph's conversation with Matthias, for instance), I'm still looking forward to their presentation in the JSP project.

I thought the introductions and notes were very helpful to Joseph Smith's journals in the first volume of that series.
October 28, 2009 at 9:15 PM