Few scholars have so deftly studied the intellectual life of a mass religious movement as Mark Noll has. Peter Steinfels praised Noll's 1994 book, The Scandal of the Evangelical Mind, in the 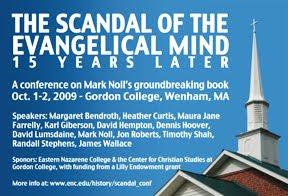 New York Times. "Fundamentalism hardened evangelicalism's emphasis on the authority of the Bible into a strict theory of literal interpretation," summarized Steinfels, "a preoccupation with apocalyptic prophecies and a fierce concern with keeping true believers uncontaminated by others. Although much of evangelical America is now 'post-fundamentalist,' [Noll] says, it suffers from lingering habits of anti-intellectualism and of using the Bible as a data bank of detailed information rather than for spiritual guidance and rejuvenation." The following year, participants in a symposium on the book published in First Things described the Noll's book as a “jeremiad, profound in implication but simple in form.” They aptly summarized his chief argument: “The problem, in short, is evangelicals’ appalling parochialism, their unwillingness to break out of the vast but all-too-comfortable ghetto of evangelical churches and colleges and publishing networks and engage an intellectual world long ago captured by Marx and Darwin and Freud.”

Even an author in Ken Ham's creationist magazine Answers acknowledged the book’s importance. “There is in fact a great deal in it which Christian thinkers need to digest,” wrote Carl Wieland in 1996, “in spite of its tragically wrongheaded approach to the authority of Scripture.” (Carl Wieland, “Book Review: The Scandal of the Evangelical Mind,” answersingenesis.org [April 1996]).

In addition to the high praise it received it has another legacy. The Scandal has influenced hundreds of young scholars, who have taken it as a challenge. Some of those, a few who were playing tetherball back in 1994, now populate the halls of major research universities and teaching colleges.

So . . . with the help of colleagues at Gordon College and Eastern Nazarene College, I've been putting together a mini-conference to be held at Gordon, Oct 1-2. We will use the 15th anniversary of Mark Noll's Scandal as a starting point for a wider conversation/debate about evangelicalism. The conference will be free and open to the public.

Here's the write up from Gordon College:

Co-sponsored with Eastern Nazarene College and the Gordon College Center for Christian Studies and partially funded by a grant from the Lilly Endowment, The Scandal of the Evangelical Mind: Fifteen Years Later will be held on the Gordon campus, located on 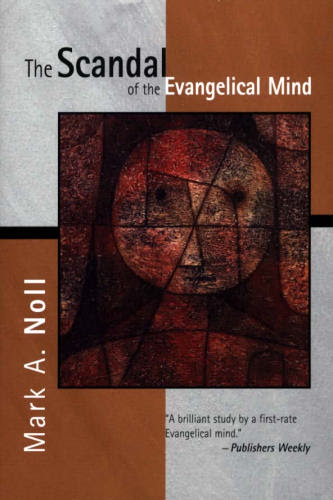 Boston’s North Shore. It will include presentations and responses by Noll himself, who is the Francis A. McAnaney Professor of History at the University of Notre Dame and was named one of Time Magazine’s top 25 most influential evangelicals in 2005.

Anonymous said…
Here is an exceptionally insightful article that I think you will find most intriguing. http://www.pressdisplay.com/pressdisplay/showlink.aspx?bookmarkid=VFCJX2WG1HK7&preview=article&linkid=3bb8db41-ceca-4d20-aa03-1a37977eb2de&pdaffid=ZVFwBG5jk4Kvl9OaBJc5%2bg%3d%3d

Christopher said…
Looks great, Randall. Will you be any chance be providing a summary (however brief) of the conference's proceedings here on the blog, or will there be any effort to eventually publish the proceedings?
September 9, 2009 at 6:21 AM

Randall said…
Christopher: Thanks for the question. I've been thinking about a possible edited volume. But, your suggestion is a good one. I'll try to post a wrap up on this site.
September 9, 2009 at 7:32 AM

Simon Fowler said…
Excellent timing! We're running our second series of "Scandal of the Evangelical Mind" Christian Formation classes at Park St Church, Boston starting this Sunday. Last time we had individuals from the church working in the fields of education, healthcare, finance and architecture (i.e. people who know whatof they speak) lead us in discussions; creating a learning community in the process.